Starring: Ovechkin scored, Samsonov and Shesterkin scored a shutout in the NHL, and Panarin scored a hat-trick from passes

Ilya Samsonov and Igor Shesterkin issued their debut shutouts in the current NHL season and were recognized as the first stars of their matches. Alexander Ovechkin ended up hitting an empty net against the Arizona Coyotes and, with a 739th goal, cut the gap to two goals to Brett Hull on the list of the best snipers in league history. Artemy Panarin gave three assists to partners and helped the New York Ranges defeat the former Columbus Blue Jackets. And Andrey Svechnikov scored points for performance in the seventh meeting of the regular season in a row. 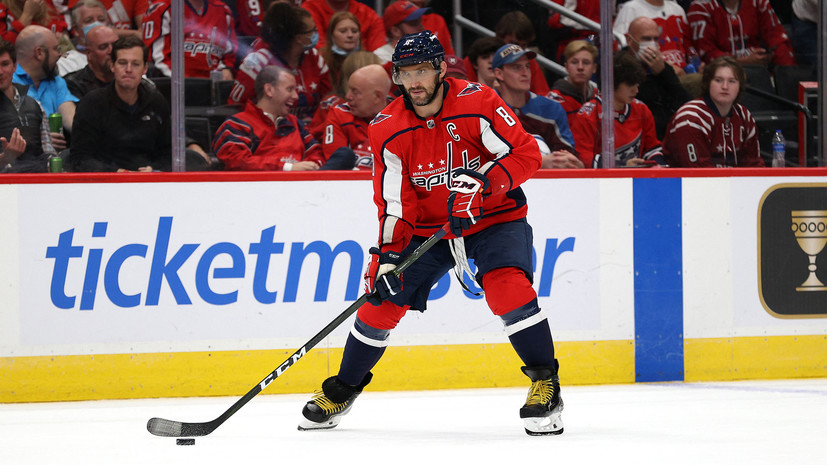 The next game day of the regular NHL championship turned out to be eventful for Russian hockey players.

Many of them took the lead roles in their teams on Saturday.

The goalkeepers, of whom there are many in the strongest league of the planet, also showed themselves well.

Two of them at once, Ilya Samsonov and Igor Shesterkin, issued their debut shutouts this season.

Samsonov did not have much work to do in the match with the outsider Arizona Coyotes.

Nevertheless, he made 16 saves and rescued Washington at the right time.

It is no coincidence that he was recognized as the first star of the meeting.

And in the locker room, he received a trademark shield from Peter Laviolette as a hockey player who showed himself better than others in defensive actions.

“It was difficult to stay focused.

I would like to thank the partners, they did an excellent job.

It was a tough victory, and we are glad that we managed to win it, ”the official website of the NHL quotes Samsonov as saying.

The fight really turned out to be difficult for the Capitals.

The guests, who had scored only one point before, unexpectedly gave the favorite a fight and almost turned the game into overtime.

The hosts stormed the opponent's gate, but could not hit them in any way.

They did not play in the majority either.

And only on the sixth attempt, the "capital" managed to realize the excess.

Eight minutes before the end of regular time, John Carlson nevertheless opened the scoring with a powerful click from a long distance.

None of the partners touched the puck, and it flew into the near corner.

Alexander Ovechkin and Evgeny Kuznetsov in this episode acted as the American's assistants.

To save themselves, “Arizona” in the end removed the goalkeeper, but only missed more.

And again the Russians were in the spotlight.

Kuznetsov from the side made a transfer to Ovechkin, and he, before reaching his own blue line, threw it across half of the site.

So the striker recorded the 739th goal in the NHL and reduced the gap to Brett Hull in the list of the best snipers in the history of the league to two.

Moreover, Alexander came in second in the number of goals in an empty net (41), beating Marian Gossu.

Gretzky remains the best in this indicator (56).

In the current season, the forward has not yet left the court without points.

With nine goals and six assists in eight games, he leads the tournament's sniper race, tied for top scorers with Connor McDavid.

And in terms of the number of points on the "goal + pass" system, the domestic hockey player is now in 31st place in the history of the NHL, having caught up with Mike Gartner.

Shesterkin was also recognized as the first star.

Compared to Samsonov, he had much more work in the confrontation with Columbus.

He was especially active in the first period, when the intrigue in the match was still showing signs of life.

Overall, however, the New York Rangers looked much better than their opponents and demonstrated an excellent exit from the defense, which the opponent was unable to cope with.

Artemy Panarin showed himself great in a meeting with the former team.

The forward gave three assists at once.

Moreover, he not only took part in the attacks, but in two cases led the partners to the final blow.

In the middle of the first period, he made a neat pass from the left side to Ryan Strohm, who opened the scoring.

After the second break, the Russian found Chris Crider on a nickle, and he could only not miss from close range.

Finally, in the end, the native of the Chelyabinsk region took part in a beautiful combination and helped the same Krider to issue a double.

Let Panarin scored only one goal this season, but he assisted his comrades six times.

And shortly before the final siren, Columbus goalkeeper Elvis Merzlikin made a beautiful gesture. He gestured to his partners to stop attacking, so as not to spoil the statistics for Shesterkin and allow him to issue a well-deserved shutout. So Igor not only kept his goal intact for the first time this season, but also won the 30th victory with the Rangers in the 53rd match for the team. Only Henrik Lundqvist, Jim Henry (both 51), Cam Talbot and Lorne Chabot (both 52) reached this mark faster. No less valuable prize than the title of the first star for Shesterkin was the support of the fans. After the meeting, they chanted his name in chorus.

“The guys played one of the best matches of the season, cleaned the traffic in front of me, took on a lot of goals, and acted very smartly ahead.

I am grateful to them for their dedication and for helping me to win a dry victory.

I was just doing my job and trying to catch the puck.

My job is very simple: you have to fight for every shot in any situation, and the guys on the other side will do everything, ”the domestic goalkeeper shared his emotions.

Not only Ovechkin continues to score points in every NHL match, but also Andrei Svechnikov, who, at the start of the season, along with his Carolina, surprises the entire league.

In the game against Chicago, the Hurricanes won their seventh victory.

While Rod Brindamor's charges do not know the points losses in the regular championship.

Although "Blackhouse" managed to give the opponent a fight. During the first period, the guests took the lead twice. However, the hosts responded with six of their own washers. Svechnikov wrote one of them at his own expense. The attacker was in luck. On the 27th minute, he performed a cross to the patch from the “zero” angle, but the projectile from the defender's leg ricocheted right into the net. On the other hand, the striker had recently fought for the puck at the other side's goal and did not allow “Chicago” to leave the zone.

This goal was the striker's seventh this season, and in the sniper race he is second only to Ovechkin, sharing second place with McDavid, Elias Lindholm and Andrew Manjapape.

He also has four assists.

At the same time, Andrey's performance record in the regular season is only 24 goals, scored in the 2019/20 season.

In the fall of this year, he has already hit the gates of rivals seven times in seven meetings and will probably rewrite his personal achievement.