Kristoffersson and Taylor took the third victory in Extreme E. 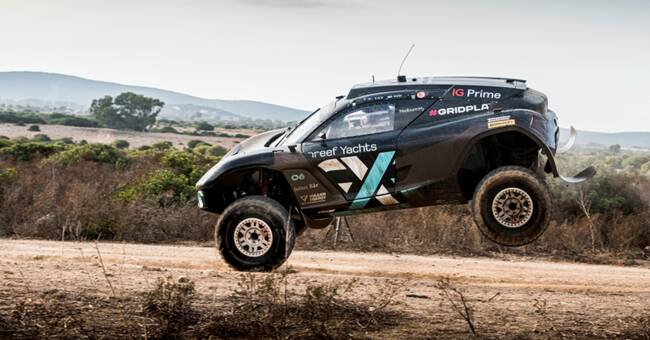 - It is important to always weigh speed against risk.

Now only two cars finished in the final.

I had 40 seconds up to the lead when I went out and just tried to keep a good pace.

When I heard that Sarah had problems, it was just to take the car to the finish line without any risks, says Kristoffersson in a press release.

The competition in Argentina was canceled and instead Italy was hosted by the holiday-celebrated island of Sardinia.

It was a dramatic end, where the Swede Johan Kristoffersson and Molly Taylor finally won.

Five cars came to the start in the final.

For Kristoffersson's team, it was Taylor who started and she took second place.

Several cars were left standing at the final pass and when Kristoffersson took over, Chip Ganassi Raching's Leduc / Price was forced to break, which allowed him to advance and secure the victory.

The course in Sardinia was challenging and Kristoffersson's colleague Taylor had concerns at first.

In the first qualifier, she rolled a full lap - but in the second qualifying round, the pair would get revenge by pinching a second place and thus advance to the finals, which were decided on Sunday.

Sébastien Loeb and Cristina Gutiérrez in X44, who are mainly involved in the championship title, interrupted earlier in the final, which allowed RXR to deduct in the overall.