Real Madrid won 2-1 on Barça's field, this October 24, 2021 in Barcelona, ​​during the 10th day of the Spanish Football Championship (Liga). A Liga where the Barcelonans lag behind in the class ... 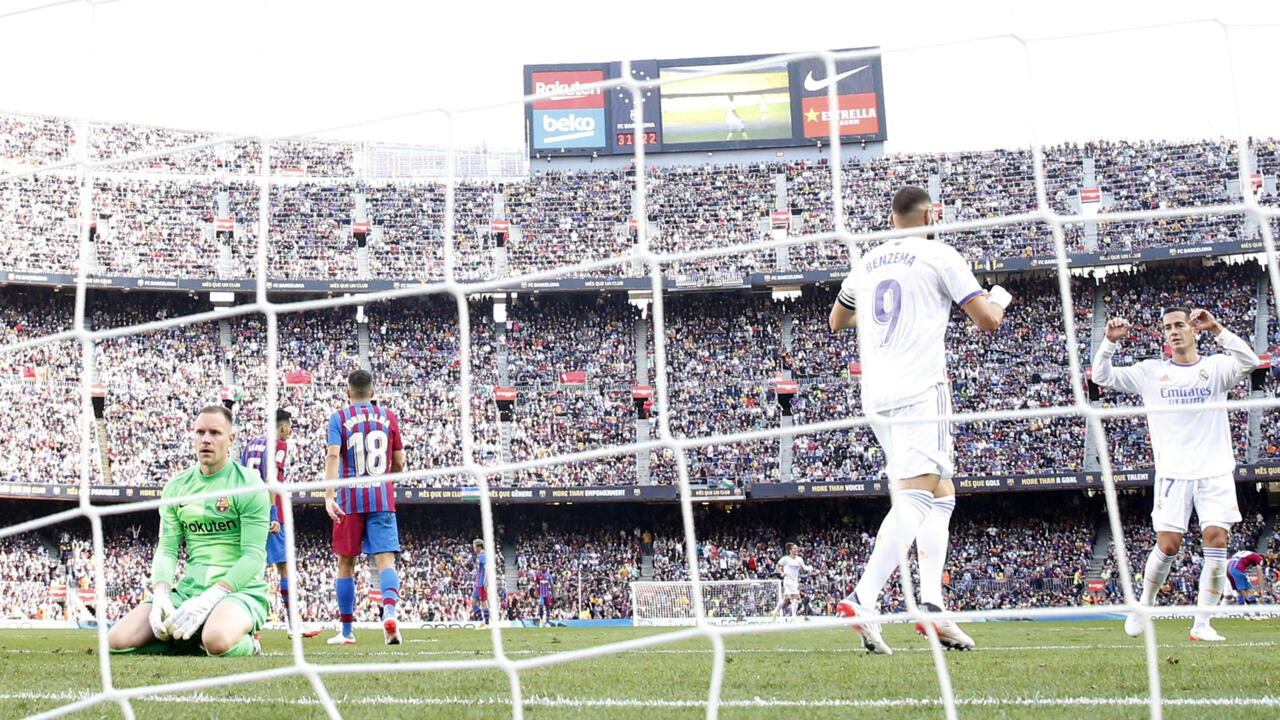 During Real Madrid's 2-1 victory on FC Barcelona, ​​this October 24, 2021, in the Spanish Football Championship.

Real Madrid won 2-1 on Barça's field, this October 24, 2021 in Barcelona, ​​during the 10th day of the Spanish Football Championship (Liga).

A Liga where the Barcelonans lag behind in the standings while the Madrilenians remain at the forefront.

The 247th football match between Real Madrid and Barça turned to the advantage of the Madrilenians, this October 24, 2021 in Barcelona.

A clasico under tension for the people of Barcelona.

They were indeed in 8th place in the standings of the Spanish Championship (Liga) before this 10th day.

Real Madrid lead 1-0 after a balanced first period (if not exciting).

At half an hour into the game, David Alaba made the difference with a cross shot from the left into the small opposite net.

The side opened the scoring at the conclusion of a counterattack that he himself initiated, with the help of forwards Vinicius and Rodrigo (32nd).

Barça, however, also had the opportunity to score.

But the right side Sergino Dest shot over the frame at close range (25th), while the central defender Gérard Piqué too uncrossed a header (35th).

In the second half, coach Ronald Koeman made tactical adjustments.

However, the Catalan club is still struggling to convince and to be precise.

It is thus Karim Benzema who shows himself dangerous at the hour mark. The attacker makes a volley repelled by the goalkeeper Marc-André ter Stegen (62nd).

The Frenchman is particularly nervous.

He knows that many jurors for the Ballon d'Or have not yet voted and are scrutinizing his performance at Camp Nou.

But the Real captain will not score.

It was Lucas Vasquez who doubled the bet (0-2, 90th + 3) on a counter-attack, while midfielder Philip Coutinho - hampered by Pique - had the equalizer ball for the Blaugrana just before.

Hard blow for the latter who however save the honor by Sergio Agüero, just before the final whistle (1-2, 90th + 7).

Barca remain behind in the La Liga standings, while Real remain at the forefront.