Title fight, rematch with Werdum or retirement: what awaits Emelianenko after the fight with Johnson at Bellator 269

Fedor Emelianenko did not rule out that he would have another fight after the fight with Timothy Johnson at the first ever Bellator tournament in Russia. The head of the promotion, Scott Cocker, said that the decision on the future prospects of the legendary fighter will be made on the basis of his performance in Moscow. Cocker admitted that he already has several candidates for the next fight with the Last Emperor. 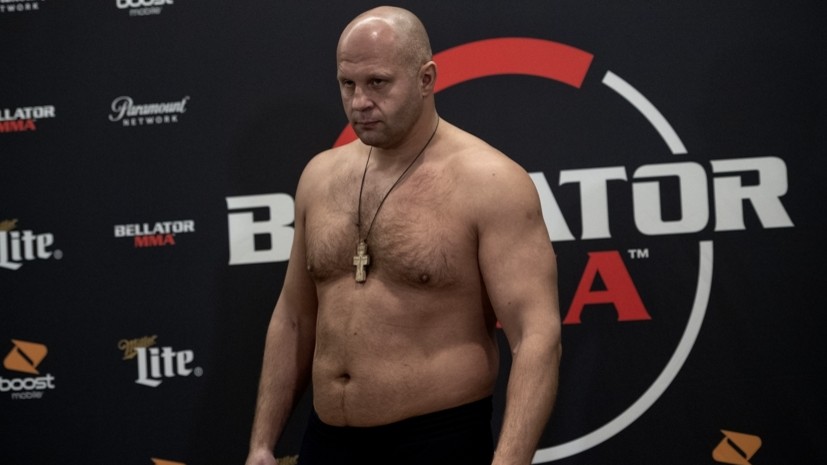 On October 23, Fedor Emelianenko will hold the second fight as part of his farewell tour, in which he will fight with the second number of the Bellator heavyweight rating, Timothy Johnson.

For many months, rumors circulated that this fight could bring an end to the career of the Last Emperor, but recently they have been increasingly refuted.

“Yes, we were planning a farewell tour of three battles ... I started talking about it back in September 2019, but the coronavirus intervened.

I appreciate that Fedor showed such patience.

And now we are here.

After the fight with Johnson, we will discuss with Fedor what we will do next, "- said Cocker during a press conference.

At the moment, Emelianenko has fought only one of the three fights of the tour - in December 2019, he knocked out Quinton Rampage Jackson at a show in Japan, after which he never went into a cage. As Cocker says, the long business of organizing a second fight with Fedor's participation was hampered by a pandemic, but then it was postponed for other reasons. The promotion did not consider it expedient to arrange such a status battle with empty stands. And when in the United States fans were allowed to attend mass events again, preparations were underway in Russia for the first Moscow tournament. Undoubtedly, the speech of the Last Emperor at home was more expedient from both financial and media points of view, so the option with the United States was no longer considered.

At the same time, Cocker repeatedly noticed that the fight in Moscow could be the last for Emelianenko. So, in December, he expressed the opinion that he should finish his career in the 30-thousandth arena in the capital, heading the first Russian show Bellator. And there were grounds for such statements. In September 2021, Fedor celebrated his 45th birthday - a critical age even for representatives of heavy weight. It is not known in what state the athlete is at the moment, and it is almost impossible to predict how the duel with Johnson will affect his health and whether he will be able to return to the cage again.

It's no secret that Cocker has always been very warm to the legend of Russian MMA. It was he who organized his arrival at Strikeforce - the first major American promotion in Emelianenko's career, and eight years later reunited with him at Bellator. Therefore, it is logical that the functionary is worried about the health of the fighter and does not want his love for mixed martial arts and the desire to continue performing lead to negative consequences. Unsurprisingly, Scott came up with the idea of ​​a farewell tour after the end of the Bellator Heavyweight Grand Prix Final. Then Fedor was brutally knocked out by Ryan Bader.

During a virtual press conference ahead of the show in Moscow, Emelianenko said that the outcome of the battle with Johnson would not affect his decision to pursue a career. However, this is hardly true. Even though the fighter himself is determined to enter the cage three times as part of the farewell tour, Cocker may be against it. And in the event of another crushing defeat, he will certainly make every possible effort to dissuade Fedor from returning.

An unsuccessful performance can not only become a confirmation that Emelianenko is not in the best shape, but also provoke serious injuries. At such a solid age, recovery can take a long period, which is also unlikely to have a positive effect on the condition of the fighter. As a result, the farewell tour may stretch until the end of 2022 - early 2023. And at 46 years old, only a few manage to remain competitive.

Thus, in order to guarantee himself the next fight, Emelianenko needs to deal with Johnson as confidently as possible. An ideal outcome would be similar to that recorded in the duel with Rampage. Then the Russian practically did not miss anything, but sent the American to the canvas already at the 164th second. However, it is unlikely that such a development of events can be counted on in a battle with the second number in the rating of the heavy division.

The choice of Johnson as a rival in the fight in Moscow initially seemed illogical, and given Emelianenko's aspirations, doubly.

Despite his successes at Bellator, Timothy is not a well-known fighter and does not correspond to the status of the Last Emperor's farewell fight.

But at the same time, it is in the top of the organization's rating and represents a colossal danger.

Most recently, he fought Valentin Moldavsky, the interim heavyweight champion and Fyodor's pupil, who is currently at his peak.

Even if the Russian had an advantage, the fight was not the easiest and lasted all five rounds.

Explaining Emelianenko's decision to fight Johnson, Cocker said that the list of candidates for a fight with the legend numbered about 20 names, but in the end the Russian himself insisted on the candidacy of a 36-year-old American.

“Everyone wants to get along with Fedor. You can understand them, because a fight with one of the main stars of MMA of the last 15-20 years raises the price of a fighter. Ultimately, this list was reduced to 3-4 candidates. Fedor wanted to fight one of the seeded fighters. When Moldavsky fought Tim, Emelianenko came up to me and said: "If Moldavsky loses and Johnson becomes the interim champion, I want to fight Tim." This shows the level of opposition that Fedor wants to compete with. He could have picked a much more passable and simple opponent outside the top 10, but he wants to fight at a high level. That is why the choice fell on Tim ", - quotes Cocker" Championship ".

Of course, the desire to compete with the strongest can be an important aspect, but not the only one. It is possible that the intention to test his strength in a duel with such a serious opponent is explained by Emelianenko's attempt to guarantee himself a rematch with Ryan Bader, who currently owns the champion title. A victory over the second number will probably be enough to return to the top of the rating, and the obligatory contender in the person of Moldavsky is unlikely to force the meeting with the American and will certainly miss his mentor ahead.

The return duel with Bader is quite consistent with the status of a farewell in Emelianenko's career, especially if the latter wins.

And at the moment, such a development of events does not seem so incredible as before.

Ryan has lost two of his last three battles, both by knockout.

He could not boast of a granite jaw before, and recent results show that his ability to withstand a blow has significantly decreased.

In a duel with Fedor, this can be of tremendous importance, because the trademark right cross still poses a huge danger.

In turn, Coker did not disclose the name of Emelianenko's possible opponent, but hinted that he was a very strong athlete.

A reigning belt holder and former UFC star may well fall into this category.

This rival is much cooler (Junior. - RT) Dos Santos ", - quotes the words of the" Sport-Express "functionary.

If revenge with Bader is still not considered, then one of the most likely opponents of Emelianenko can be called Fabricio Werdum.

Their return duel was much talked about in 2021, but the Brazilian was under a contract with the PFL, so he was not able to play at Bellator.

Next year, there will be no such obstacles, as a result of which, Cocker may well try to arrange a meeting between the two heavyweight legends.

And from a media point of view, it is difficult to imagine a fight that most corresponds to the level of Emelianenko's farewell tour.

In 2010, it was Werdum who inflicted his first full defeat and since then the excitement around the revenge has only grown.

In comparison with him, there is no second fight with Orlovsky, or with Matt Mitrion, and only superduel with Brock Lesnar can compete.

However, he has returned to WWE wrestling, making his return to MMA unlikely.