Oskarshamn won despite a match penalty

The match penalty on Cameron Brace was becoming Oskarshamn's case. But Jonas Engström saved all three points after the late 3-2 goal against Skellefteå. 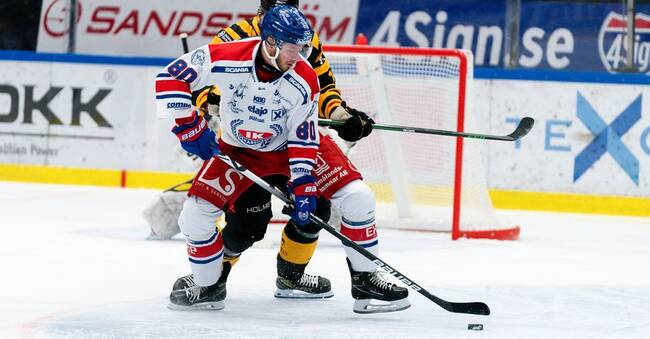 Oskarshamn got a taste start to the match after Kim Rosdahl's early lead goal and was then the sharper team throughout the period.

But then Cameron Brace lost his temper and put the team in a precarious position.

The Canadian put in a brusque tackle on Adam Wisby and a riot broke out on the ice.

Brace handed out both a slashing and crosschecking against Skellefteåbacken before he was awarded a match penalty.

After that, a full seven minutes of play awaited in powerplay for Skellefteå - but then Oskarshamn's Kim Rosdahl took the opportunity to extend the lead to 2-0.

Skellefteå coach: "Well, I got it"

Skellefteå, however, had to continue the powerplay game at the beginning of the third period where the dividend would come.

But that was not enough for any points for Skellefteå.

Jonas Engström became the big match winner when he scored the 3-2 goal in the final minutes.

- We got to it in the last period and looked like the Skellefteå we are going to do.

I thought we would resign with the victory, but I got it, says Skellefteå coach Robert Ohlsson.

The machinery went out after a blow to the shoulder

In addition, they suffered a heavy setback when the successful forward Adam Mascherin was forced to break after a tackle on the left shoulder.

- They will probably get an X-ray of Adam and we will take it from there.

We will probably get an answer tomorrow, says Ohlsson.

It was the second straight victory for Oskarshamn, which is in seventh place in the SHL table with 22 points after twelve games.

Skellefteå is third with 24 points.