Bronze double: Melnikova and Klimentyev won a medal at the World Championships in artistic gymnastics

Angelina Melnikova won her second medal at the World Artistic Gymnastics Championships in Kitakyushu. She became the bronze medalist in the vault. Also, the all-around winner took fourth place in the uneven bars. Grigory Klimentiev won the only award in the men's team, sharing the third line in the final on the rings. 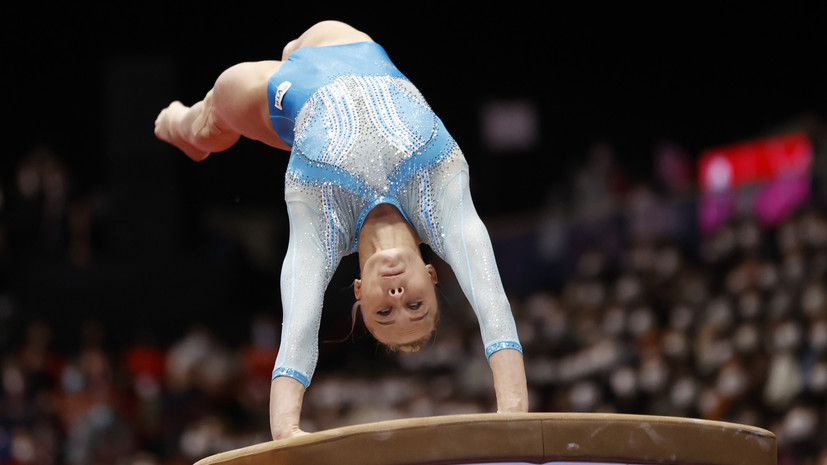 On Saturday, at the World Artistic Gymnastics Championships in Kitakyushu, the draw for medals in individual exercises began.

Following the results of five finals, the piggy bank of the Russian national team was replenished with two more awards - Angelina Melnikova and Grigory Klimentyev won one bronze each.

The new all-around world champion Melnikova did not have time to rest on her laurels after her success.

The 21-year-old has qualified for all four individual finals and was scheduled to return to the platform two more times on Saturday.

The first competition for the girls was the vault, where, after the victory of Maria Paseka in 2017, the Russians did not have medals at the world championships.

At the very beginning of the final, it became clear that it would be impossible to fight for gold.

Brazilian Rebeca Andrade, who became the best in this discipline at the Tokyo Olympics, removed all questions about the winner with her jumps of incredible difficulty.

For the performance of Yurchenko with two screws, Andrade received an incredible 9,400 points, that is, almost approached the ideal according to the judges.

By the time Melnikova began her attempts, the second and third places were quite unexpectedly taken by the Italian Azia D'Amato and the Egyptian Nancy Taman.

It was enough for the Russian woman to perform in her own strength, as she already did in the qualifying and the all-around final, in order to get around them.

But they managed to fulfill their plan only half.

Melnikova went according to D'Amato's program and coped with two Yurchenko's propellers, but in the second jump she allowed too much rebound, which led to an incorrect position in flight.

As a result, both her base grade and her performance grade were downgraded.

The reserve of the first jump, which gave a chance for silver, was enough to take third place.

Interestingly, at the awards ceremony, D'Amato was indeed first given a bronze medal, but Melnikova noticed a mistake and asked to return the Italian woman her well-deserved award.

It was too early to rest after that Melnikova - the next in her final was the uneven bars final, where Vladislav Urazova also made his way. In this form, the fight for medals turned out to be the most intense. By the time the Russians started showing their programs, the Chinese woman Wei Xiaoyuan was in the lead, with one tenth point inferior to Andrade and her compatriot Luo Rui.

It turned out to be impossible to break this strong three.

Urazova as a whole coped with her set of elements and earned 14,400 points - at the recent Olympics, this would have been enough for fourth place, but in Kitakyushu, the rivals were much stronger, and the 17-year-old Russian woman was only seventh.

Melnikova also had almost no roughness, except for one torn ligament, which the gymnast tried to compensate for with the complexity of the program.

But she still lacked one tenth to the medal.

The world champion in the all-around took fourth place.

Only one athlete was able to make it to the finals from the Russian men's national team.

Grigory Klimentyev shared the third place in ring qualification and turned out to be the team's only hope for a medal.

The 20-year-old gymnast took full advantage of this chance.

The youngest participant in the final performed as reliably as possible for a debutant in such a serious competition.

He showed exactly the same result with the Italian Salvatore Maresca and was on the same line with him, losing only to the Chinese Lan Xingyu.

At the last moment, they were bypassed by another representative of Italy, Marco Lodadio.

The medalist of the last two world championships made it to the final only thanks to the refusal of his rivals and eventually bypassed Klimentiev and Maresca by 0.033 points, leaving them with bronze medals.

The senior coach of the Russian national team Valentina Rodionenko called the performances of Melnikova and Klimentyev a success.

She noted that while the world champion in the all-around is not in optimal shape.

“Grigory Klimentyev is the heir of our titled ring specialist Sasha Balandin, a very promising boy. The only thing he has so far is the only strong projectile. For him, this bronze medal of the World Championship is an absolute success. As for Melnikova's performance, she is generally well done. Gela did not fully fit into the form because of all these post-Olympic honors and celebrations. But she is smart, she got herself together and did what she had to do. The bronze of the World Championships in the vault with such a competition can also be considered a great success, "- Rodionenko TASS rock.

On Sunday, Russian gymnasts will have four more chances to climb the podium.

Melnikova will perform on the balance beam and in floor exercises - in both of these disciplines she was second in qualification.

Also, in the first final, Yana Vorona will enter the platform, and in the other, Urazova will make another attempt to win a medal.