"An era is leaving with him": two-time Olympic champion in cross-country skiing Vedenin dies

The famous Russian skier Vyacheslav Vedenin died at the age of 81. According to the head of the FLGR Elena Vyalbe, the former athlete recently experienced serious health problems and underwent two operations. The brightest page in Vedenin's career was the 1972 Olympic Games in Sapporo, from which he brought two Olympic gold medals. The Soviet athlete had no equal in the 30 km race, before which he uttered the word “dahusim” that went down in history. And then in the relay, Vedenin played a minute lag behind the Norwegian, going for a trick with ski grease. 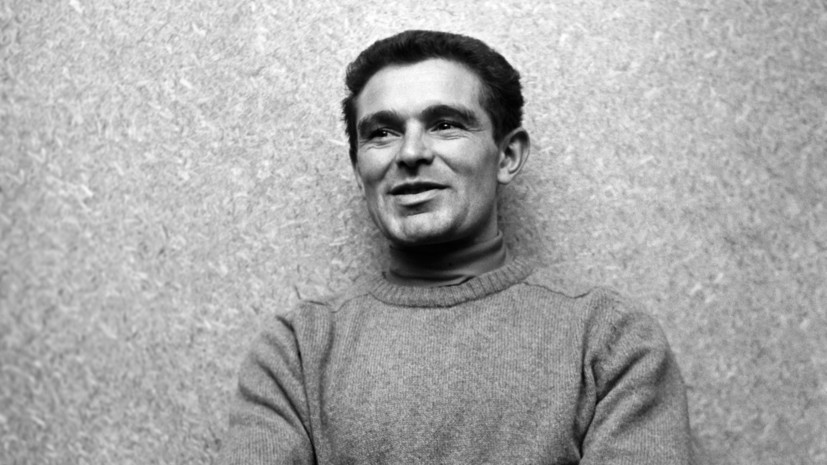 "I loved my country, sports, I was a real patriot"

The death of the famous Russian athlete was announced by the President of the Russian Ski Racing Federation, Elena Vyalbe.

According to her, Vyacheslav Vedenin has been seriously ill lately.

The two-time Olympic champion, who turned 80 less than a month ago, had serious problems with blood clots and recently underwent two surgeries.

“When such great people as Vyacheslav Petrovich leave, an era leaves with them.

He is an Olympic champion, what else can I say ... An example and an idol for millions of people ", - quotes the words of the" Championship "functionary.

Back in 2013, in an interview, Vedenin admitted that he had suffered a severe stroke.

“It’s gotten in the village.

I spent a month in the local hospital.

The right arm did not unbend, the doctors said it was necessary to amputate.

I realized it’s time to blame.

He collected the belongings and quietly gave the tree through a hole in the fence, "Sport-Express quotes Vedenin.

The Federation expressed its deepest condolences to the family and friends of the deceased.

The FLGR promised to inform about the place and time of farewell to him later.

However, according to media reports, the funeral will take place, as the skier himself bequeathed, in his native village Sloboda in the Tula region, where he recently lived.

The death of Vyacheslav Petrovich became a real tragedy for the world of cross-country skiing.

The former head coach of the USSR and Russian national teams, Alexander Grushin, called his colleague a great athlete and a very good person.

“It is a pity that the era associated with the achievement of a result, which was based on enormous work, is passing away with him.

He was also a great friend and companion.

We have lost another devoted and famous person in skiing, ”the specialist emphasized.

According to the former president of the FLGR, Vladimir Loginov, Vedenin, despite his health problems, led a fairly active lifestyle and often attended various events, where he was happy to communicate with young people.

“The last time we talked was in Monchegorsk, he spoke in front of skiers who had to start at a distance of 70 kilometers.

He talked about the opening of the Olympics in Sapporo, when the operator asked everyone to bend down, and he walked as he walked.

Vyacheslav Petrovich was a man of amazing willpower.

He loved his country, sports, was a real patriot.

And the Olympic champion of Lake Plesida Vasily Rochev thanked the legendary athlete for his help before the silver 30 km race that became for him.

“Our coaches assured that everyone would be corrected along the course, and one lap was 10 kilometers long.

Vyacheslav Petrovich then came as a tourist.

He added as much as he could and took second place, this is the merit of Vyacheslav Petrovich.

His main words were: "Think, you can't beat strength by force."

This was his motto, I will remember forever, ”said Rochev.

Finally, the coach of the Russian national team, Yuri Borodavko, admitted that he always looked up to Vedenin “as a great one”.

“I had a portrait of him running on skis from the Ogonyok magazine.

I went to bed and woke up with a portrait of a person who was an example for me.

I looked up to him as a great one.

I wanted to be like him, ”the specialist recalled.

"In a neighboring village, the Nazis shot four, and in ours they all hid."

Vedenin was known as a skier with unbending willpower, who fought to the end and did not succumb to external circumstances.

In many ways, the character of the future two-time Olympic champion was shaped by childhood.

Vyacheslav Petrovich was born in the difficult hungry war years.

He did not have a chance to see his father - he went to the front even before the birth of his son and died.

But even years later, the athlete remembered how a funeral came to their house.

"No details:" He died a heroic death near Smolensk ... "In a neighboring village, the Nazis shot four, and in ours they all hid.

About six Germans marched through the streets and moved to Dubna.

Where is the iron foundry.

I had terrible rickets from hunger.

There was no nettles to be found in the village, they ate them all, - so he ate an old quinoa.

The only delicacy is terunes, "Vedenin said in an interview with Sport-Express.

From an early age, the boy was distinguished by great physical strength and endurance.

But my studies did not work out.

Later, the famous skier admitted that at school he was only given a certificate of completion of seven classes, which was a kind of "wolf ticket".

Therefore, the young man even had to cut wood in Kotlas.

At first, the young man successfully showed himself in cycling, and then switched to skiing.

“A lieutenant on a bicycle was hit by a car - and to death.

Don't let them go over the fence! "

I didn't want to serve.

And I ended up in Dynamo with Vasily Smirnov, a well-deserved, well-deserved person, 14-time champion of the USSR in cross-country skiing.

He put the technique on me.

Again the shout: “I put my leg down and roll on it until I say“ one ”,” Vedenin recalled.

He quickly began to show good results in a new form for himself and became one of the strongest in the country.

However, great success came only closer to 30 years old.

In 1968, he went to the first-ever Olympic Games in Grenoble and won the silver medal in the 50 km race.

He performed much brighter at the 1970 planet championship in Visoka Tatri, where he won gold at a distance of 30 km and in the relay.

After that, Vyacheslav Petrovich arrived at the Olympic Games in Sapporo in the status of the main favorite. The first kind of program, 15 km, he skipped in order to better prepare for his favorite thirty. And shortly before the start, the Soviet athlete got into history, which became part of folklore. According to the bike, before Vedenin left for the distance, heavy snow began. A nearby Japanese journalist asked how the skier plans to deal with the changing weather conditions. He grunted in response "Yes x ... with him." As a result, later in one of the local newspapers there was an article entitled "The Soviet skier said the magic word" dakhusim "and won the Olympics." Years later, the athlete confirmed the reality of this story.

“He came up and asked: the snow fell, how to run?

It is now that no one will be allowed to the athlete before the race, but then the correspondents wandered freely.

We climbed into the soul.

I could poke them with a stick, ”Vedenin laughed.

But this did not prevent him from winning the most important victory.

Moreover, for the first time in history, a Soviet skier won Olympic gold in an individual race.

The leader of the national team achieved no less memorable success in the relay.

The race was not going well for the USSR national team, and Vyacheslav Petrovich left for the final stage with a minute lag behind Jochs Harviken.

There seemed no chance.

The representatives of the Soviet delegation did not believe in the miracle either, who, according to Vedenin's recollections, began to leave the stands in advance.

“And most importantly, the shops were open on the last day.

You should have spent your daily allowance.

Not a single photo of mine has survived from this race, not a single interview!

Before the start I ran into coaches Kamensky and Kuzin.

A flat bottle of cognac, sipped from the throat: "Glory, second place is also a place!"

As a result, my only picture from Sapporo is on the "fifty kopecks".

And it was not me who was photographed, but the boots, ”the athlete complained.

However, as a result, he was able to play back the gap with Harviken in an incredible way and finished first.

After Vedenin admitted: a trick helped him to beat the Norwegian.

Before going to the start, he deliberately began to pretend that he was actively lubricating the skis.

The Scandinavian, looking at him, decided to repeat and was defeated.

"He whispers to the coach:" For the third time Vedenin greases ... "They squint at the blue Swix in my hands.

And your skis from toe to heel!

Then on the descent - 12. He cheated again, ”the Russian skier recalled.

The victory of the Soviet team in the relay and a miracle from the team leader also entered folklore.

And the poet Robert Rozhdestvensky, who was present in Sapporo, based on what happened, even composed the famous poem "Report on a ski race", the text of which should be placed in full:

“This traction is endless, like a road to a distant light. Behind your back, through the hum, the Swede is rolling amazingly! You beat him half a second, half nonsense! Cool lift! Who will win: either he is you, or you. Your fate has become ours, tears have risen to the very eyes. And we have to you - not an order or a request - one prayer. You win - add it! You win - click! Crouching for a moment, crouching, if you want, take our strength! Here! Why do we need them now? Please run. Doterpi, dear! Reach, reach, wheeze, smog! Through all the strangers "not in life! ..", through all their "I can not ..." Well, still, hold out! Oh, how hot it is in this snow. "

It is not surprising that it was Vedenin who, after a double success, was entrusted with carrying the USSR flag at the closing ceremony of the Olympic Games.

There, the skier also managed to get into a memorable story.

Passing the box where the emperor of Japan was stationed, he did not bow the banner, as required by the rules of local etiquette.

The newspaper "Vecherniy Sapporo" accompanied the photo from the parade with the caption: "The Soviet Union challenged everyone!"

And this is a political question, so the officials from the Sports Committee attacked me: “What have you done ?!

You will answer at home! "

But after two gold medals, thank God, no one remembered this.

Including the emperor, who personally congratulated on the victory in the relay.

Brought home, so her son was terribly afraid.

I got lost somewhere, ”the skier emphasized.

Unfortunately, Vedenin did not have a chance to perform more at the Olympic Games.

According to him, experiments with blood doping, which was not prohibited at that time, interfered.

The famous athlete had to end his career.

After that, he worked as the head coach of the Dynamo women's team.