A Manchester City supporter was attacked after this week's CL match against Club Brugge and is in a coma. Now City coach Guardiola is sending a greeting. - He has all the support from the club, he says at a press conference. 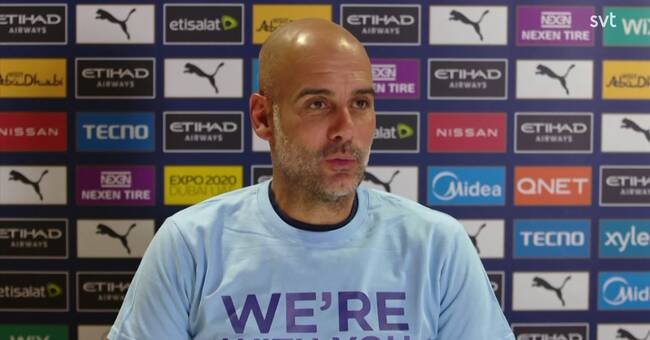 It was after Manchester City's victory against Club Brugge in Tuesday's Champions League match that the incident took place.

Guido De Pauw, a 63-year-old City supporter from Belgium, was attacked at a petrol station near the town of Drongen.

He was so badly injured that he ended up in a coma.

- The victim is still in a coma but in a stable condition, says the Belgian prosecutor.

According to The Guardian, five people were arrested for the assault.

Today, the supporter was noticed by Manchester City's coach Pep Guardiola, who wore a t-shirt with the text "We are with you Guido", at the press conference before this weekend's match against Brighton.

- We are very optimistic that he will be good.

We wish from the whole club, from our chairman to the last person, that he has all the support from the club.

We hope that he will return to Etihad so that he can follow our home and away matches, Guardiola says at the press conference.

It is still difficult to understand how people who are going to enjoy football can do something like that, he continues.

Dissociates itself from violence

"It is with shock that the club has received the information that a Manchester City supporter has been attacked.

Club Brügge distances itself from all criminal behavior, both inside and outside the arena, and stands for respect and tolerance at all times.

Our thoughts go to family and friends to the supporter ”.