"His attacking game is still at its best": Ovechkin scored two points and burst into the top three NHL scorers

Alexander Ovechkin scored two assists in the National Hockey League match against New Jersey and helped Washington win their third victory. The Russian striker brought the number of points scored to eight and entered the top three scorers. He started the season in the NHL more successfully only once - 12 years ago. 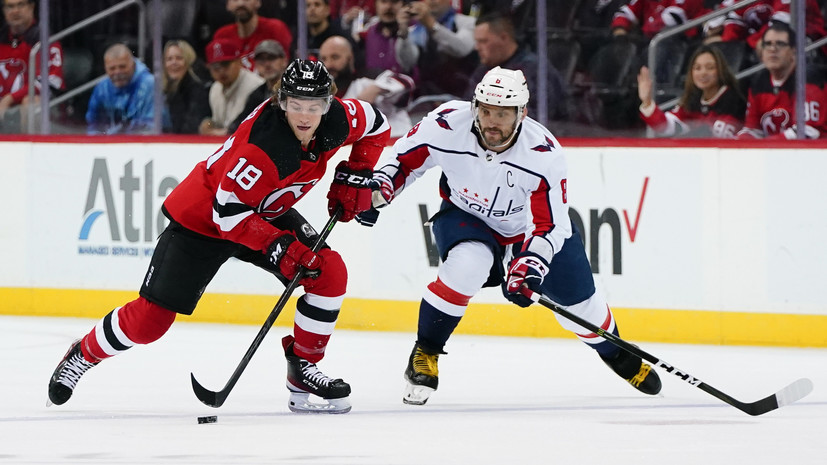 Striker "Washington" Alexander Ovechkin once again was marked by effective actions in the match of the regular championship of the National Hockey League.

In the fourth round, the Capitals in Newark met with the New Jersey Devils.

By the beginning of the second period, the guests were leading with a difference of two goals and in the end they confidently won with a score of 4: 1.

The captain of the capital could not score this time, but played the role of a playmaker, giving two assists at once.

In the 10th minute, the Russian hockey players of "Washington" created a completely Russian goal: Evgeny Kuznetsov noticed Dmitry Orlov's involvement in the attack on the left edge and passed it on.

The defender made a pass to Ovechkin's shot.

Alexander's shot was repelled by the goalkeeper, but the puck bounced back to Orlov, who turned out to be accurate on finishing.

In the second period, Ovechkin again made the audience applaud in the stands.

The Russian confidently pulled away from the opponent and gave an accurate pass from his knee to Kuznetsov, whose shot was blocked.

However, Eugene did not leave the ice without an abandoned puck, having distinguished himself in the middle of the third period.

Ovechkin transferred the puck to Thomas Wilson, and he quickly gave it to the center Kuznetsov, who shot the gate of the "devils" at close range.

So, Ovechkin chalked up an assist and earned the 1328th point in the NHL regular season.

By this measure, he came 32nd in the history of the league, and behind the captain of the Capitals are such NHL legends as Pierre Tarjon (1327 points), Gilbert Perrot (1326) and Sidney Crosby (1325).

The beginning of the season for "Alexander the Great" is truly outstanding. In four meetings, he has already scored eight points (four goals + four assists). At the same time, in the actions of the 36-year-old captain of “Washington”, all the same sharpness, speed and accuracy are observed that he had in his youth - as if he did not have 15 seasons in the NHL behind him.

In the very first match with the New York Rangers, the forward set another record.

Having scored two goals, he came in fifth in the number of goals in the regular league championships.

According to this indicator, the Russian bypassed the Canadian Marcel Dionne, who has 731 goals.

At first Ovechkin got one more, and after the meetings with Tampa and Colorado, in which Alexander was also able to distinguish himself, - 734!

The figure is quite surmountable - the Russian has another five years of the contract ahead.

That is, on average, he needs to excel 32 times per season.

At the same time, Ovechkin usually throws about 50 goals in the regular season.

Not surprisingly, the Russian forward became the second star in the first week of the NHL, leaving behind only Los Angeles Kings striker Anger Kopitar, who gave one more assist.

Then he scored seven goals in the first two games, and after four meetings he earned the same eight points.

Then Alexander scored three points in each of the first three matches.

Nobody expected such a start from the captain of the Capitals now.

Before the start of the season, some experts had doubts at all whether the Russian would be able to keep his level.

Many believed that Ovechkin would not even complete his new five-year contract with Washington.

In addition, during pre-season training, Ovechkin was injured in a game with the Philadelphia Flyers.

The forward spent only two minutes on the ice, after which he collided with the opponent's striker and was unable to continue the fight.

Fortunately for the fans of "Washington" and the Russian national team, the hockey player returned to training in a few days.

However, given the damage he received during the past season, this could lead to not the most positive thoughts about the player's future career.

So, the former NHL tough guy John Scott before the start of the regular season was sure that the Capitals would not make the playoffs of the tournament, and Ovechkin ended up as a hockey player and would not be able to score more than 30 goals in a season.

Now, the arguments about the leader of the capital's team chasing a sniper record are again relevant.

According to a member of the Hockey Hall of Fame Marcel Dionne, Alexander is quite capable of getting ahead of Gretzky and becoming the best NHL goalscorer in history - the main thing is to have enough health.

“Ovechkin is close to getting ahead of Brett Hull, Jaromir Jagr and maybe a little later - Gordie Howe.

It's incredible how quickly he got to them.

I'm glad I lived up to this moment, as very few reach such a high level.

At the same time, he is still needed by the team, and his actions in the attack continue to be at their best.

I want to wish him great health.

Every time I have the opportunity to watch the match of "Washington", I focus only on Ovechkin, "- quoted by Dionne on the official website of the NHL.

Two-time Olympic champion Alexander Kozhevnikov also believes that only injuries can be the main obstacle to achieving the goal.

“Let's see how the season will unfold, so long as Ovechkin doesn’t get in the way of injury.

It is most important.

And so, he is a big boy, an experienced comrade, he will not be offended, ”the expert said.