Skellefteå turned late in the summit with Rögle

Skellefteå was able to decide the SHL summit against Rögle in the extension. A few seconds before it was time for penalties, Adam Mascherin was able to hit the puck between the legs of Rögle goalkeeper Christoffer Rifalk and make it 3-2. 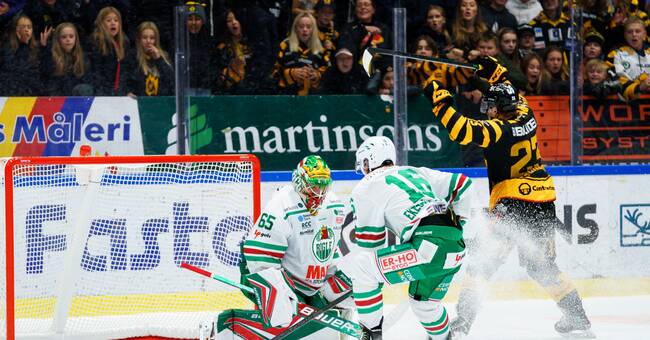 It was hill Oskar Nilsson who took Skellefteå to extra time with a shot from a small angle in the final minutes that meant 2-2 after 57.55.

- Did not find a passport so I shot.

Was a little worried for a while but I think we sorted it out well.

We were worthy of winning, says Oskar Nilsson to C More.

The heat and emotions were lacking for a long time, but in the middle period it ignited.

First, Skellefteå's Melker Karlsson missed a completely open goal from a few meters away, when teammate Jayce Hawrylyk a few minutes later got exactly the same position, 1-0 to Skellefteå was a fact.

The goal came when the home team had two more men on the ice after Rögle during a pending expulsion incurred another two minutes penalty for tripping.

Veteran Joakim Lindström was responsible for the goal-scoring pass straight through the shooting sector and Hawryluk made no mistake.

- Jocke stood for a nice pass, it was just to put it there.

He is a fantastic hockey player and I am happy to play in the same chain as him, Hawrylyk says to C More after the second period.

Rögle looked to be heading for victory

The third period was only a minute old when Rögle could equalize.

It was 19-year-old Wallinder's first goal in the SHL.

Shortly afterwards, it was time for a new Röglemål.

After a massive home pressure, Rögle countered, Joakim Lindström hooked up a free Adam Edström, but before the referee had time to sentence, Leon Bristedt had made it 2-1 for Rögle.

The goal seemed to be decisive but two minutes from the end, the home defender Oskar Nilsson scored right from almost no angle at all and was able to take the match to extra time.

Then Adam Mascherin decided in overtime.