He describes last season as a failure. To succeed now - and especially during the Olympics - Calle Halfvarsson has made a drastic decision. Exercise less and at the same time become lighter. - I have to do something - otherwise I might as well quit this. Then I came to the conclusion that I should try to train less, says the 32-year-old to SVT Sport. 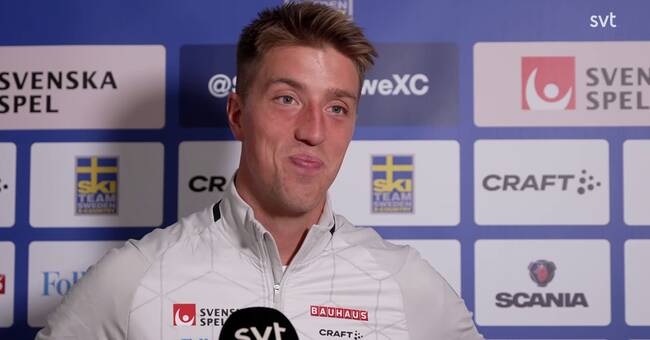 For many years, Calle Halfvarsson was the Swedish hope on the men's side.

But last season, both Oskar Svensson and Jens Burman stepped on the podium for the first time.

At the same time, the future name William Poromaa made its international breakthrough.

- It is at least a security of course - I do not have to perform, these do it, says a smiling Halfvarsson and points to his teammates.

- I have been at the level they are at now, been up there and fought for podium places and victories in the World Cup.

So I just want to go back there.

The last time Calle Halfvarsson stepped up on the World Cup podium was when he finished third in the 15 km classic during the premiere weekend in Ruka 2018. His latest victory was in Lillehammer 2016.

But last season he finished best in 20th place.

And during the World Cup, he was forced to break the only race, the skiathlon, in which he competed.

- The last season was actually a failure with a long illness and a very strange feeling where I did not really recognize my body.

I trained really well and a lot during the summer and autumn, then I just broke down.

Then I made a decision myself, that I have to do something - otherwise I might as well quit this.

Then I came to the conclusion that I should try to train less.

Just like last season, it is the distance races that the former sprinter Halfvarsson mainly invests in.

Therefore, his goal is to lose four kilos before the Olympics.

- Most people know that if you want to perform at a distance, then you have to be a little in the easier direction.

You must not be too muscularly built.

I try to narrow down a bit and look like a distance rider.

- But it is clear that it is difficult to lose weight, I do not have much fat resources to lose.

How much easier have you become?

- I must have lost two kilos from last year, but I want to lose two more I think.

How much difference do you think four kilos make?

- If you start counting on each step during a competition and you have to lift four kilos more, then it will be quite a few kilos.

There is talk that Gunde Svan sharpened the rod tips to get a few grams at a time.

Then we start talking, four kilos is quite a lot.

Ebba Andersson's anger towards her teammates.