Several titles each in recent years give Växjö against Frölunda the epithet "heavyweight meeting". The team's first battle of the season offered both entertaining ice hockey and excitement. - Really tight match, great fun to play, said Frölunda's winning shooter Elmer Söderblom to C More after a 3-2 victory, after extra time. 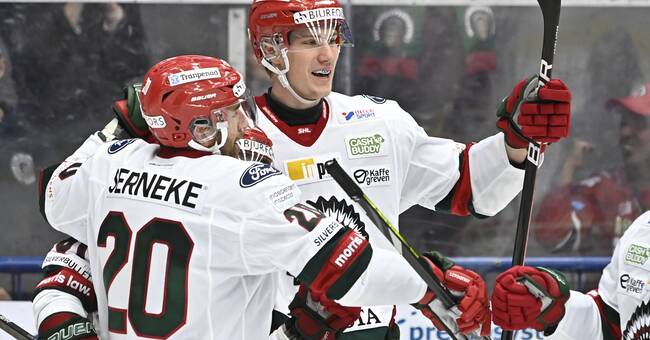 The first period of the season between the two heavyweights in the SHL ended in a draw.

Frölunda's boxplay line-up lost Martin Lundberg who took advantage of the free position by making it 1-0 to Växjö.

- I aimed at the cross, it went in between the legs, said Martin Lundberg and smiled in a break interview in C More.

A few minutes later, Växjö became aware of the inappropriateness of being careless in their own zone when Frölunda's points king Ryan Lasch is on the ice.

Växjö made a mistake, Lasch was ruthless and Frölunda caught up on the scoreboard.

Växjö began the second period by scoring the evening's second goal in powerplay, this time with Glenn Gustafsson as the last player on the puck.

Shortly afterwards, Frölunda got the chance in powerplay and also took the chance.

Ryan Lasch's pass found his way to team captain Joel Lundqvist in front of goal - then it was 2-2 on the board.

- Not crazy, said Joel Lundqvist to C More regarding that Ryan Lasch is back in Frölunda and delivers "sandwiches" on the magazine.

When Lundqvist, barely halfway into the third period, ended up in the penalty box, Växjö got a golden chance to take the lead a third time.

But Frölunda weathered the storm, both that time and when Christian Folin, last season in Växjö, drew another expulsion on Frölunda.

During the final minute of the third period, Växjö was extremely close to a new lead goal, but after 60 minutes of ice hockey, both teams were able to state that they had taken points.

1.03 into extra time, Elmer Söderblom, in game four against three, shot the victory to Frölunda.