Faint play in attack and successful substitutions of the opponent: how Lokomotiv lost to Galatasaray in the Europa League

Lokomotiv lost with a minimum score to Galatasaray in the match of the third round of the Europa League group stage. The guests scored the only goal shortly before the final whistle. The substitutions of Istanbul worked: Olympiu Morutan gave an assist, and Kerem Aktyurkoglu, who met his 23rd birthday, ran away one on one with Marinato Guilherme and outplayed him. Although the railroad workers had an advantage, they practically did not create dangerous moments and never shot Fernando Muslera on target. 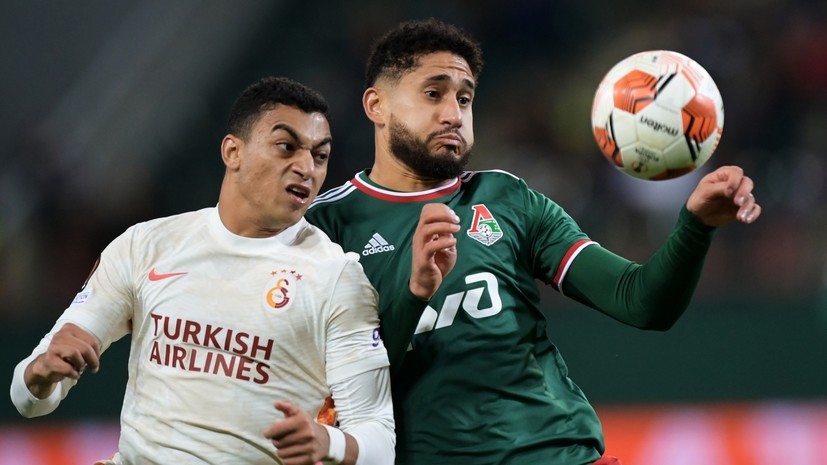 The match with Galatasaray was supposed to be the first European Cup test for the new head coach of Lokomotiv Marcus Gisdol.

It was curious how the team would show itself under the guidance of the German specialist in the external arena, although very little time had passed since his appointment.

However, even this was enough to understand: he presented his wards with fundamentally different requirements than Marko Nikolic.

In the RPL's debut meeting with Rubin, the railroad workers focused on attack and, at times, combined well on the other side, even if they barely escaped defeat.

Now the Muscovites needed only a victory.

After two rounds, they had only one point to their credit, and a new misfire could seriously complicate their life in the fight for getting into the playoffs.

Moreover, the Istanbul players started much better and took the first place in Group E thanks to the victory over Lazio and a draw with Marseille.

The return to the system after injuries of the defenders Maciej Rybusya and Tina Edvaya became a serious help for the owners.

Both took to the field from the first minutes.

And Gisdol did not have to, as in Kazan, have to use Dmitry Barinov in the center of defense.

The midfielder took his usual place in the support zone.

Also included in the starting lineup Rifat Zhemaletdinov, who remained in reserve in the game with Rubin, but, coming on as a substitute, equalized the score in time added by the referee.

The first half left a positive impression on the hosts' fans.

If in the matches with Marseille and Lazio Lokomotiv acted strictly from defense, then in the reporting meeting they played the first number and more often owned the ball.

Moreover, the team once again showed its strong quality with a new headquarters - pressure.

From the first minutes, the railwaymen organized pressure on the other side of the field and did not allow the opponent to create even a kind of counter-blows.

Sometimes they entered the selection overly aggressively and broke the rules.

The Muscovites had no desire, and most importantly, the idea fully worked.

In positional attacks, they relied on short passes, practically not performing long passes.

It was not so easy to go through the saturated central zone of the guests, and therefore the red-greens were looking for space on the flanks.

However, it was possible to penetrate into someone else's penalty area infrequently.

In many ways, the functionality of Anton Miranchuk was lacking, capable of leading a partner to the final blow.

Zhemaletdinov in this capacity was not so noticeable.

As a result, before the break, Lokomotiv not only did not create a single really dangerous moment, but also did not strike a single shot on target.

I remember only a slightly inaccurate shot of Maradishvili in the far corner.

The Istanbulites never hit the target, too, who did not easily pass the middle of the field and, unlike Rubin, did not at all use the opponent's sparseness in defense.

As a result, Marinato Guilherme was frankly bored and almost never met the ball.

However, after such an active first half, Lokomotiv could not but have problems in the second.

It was almost impossible to operate at such high speeds for 90 minutes.

This is what happened.

If before the break "Galatasaray" practically did not penetrate the other side, then after that it began to do it much more often.

The hosts now did not always have time to enter the tackle and block the approaches to their own penalty area as swiftly.

Hence the appearance of free zones.

However, the guests managed to create the first chances after corner kicks.

At first, Victor Nelsson, left unattended, almost from the goalkeeper's line struck under the crossbar, but Guilherme miraculously saved his partners.

And then Ryan Babel from under Zhemaletdinov sent a shell into the near corner, but missed the target a little.

The Russian in this episode received a serious head cut.

It took the doctors a few minutes to stop the bleeding, but number 17 remained on the field.

The railroad workers still lacked specificity in the attack.

They owned the ball only on the outskirts of the penalty area, but did not approach other people's goal.

And as the speed dropped, the opponent's defenders calmly controlled the situation.

Looking ahead, Gisdol's charges, although they struck 12 strikes, never hit the target.

In such a situation, replacements suggested themselves.

Smolov practically ceased to cling to the ball.

The technical Girano Kerk was lost on the right flank.

Maradishvili was also unnoticeable on the opposite side.

But there was no one to refresh the attacking line, because not a single forward was present on the bench.

Only Dmitry Rybchinsky, who was able to play ahead on the edge, could help.

But Fatih Terim had the opposite situation.

He initially left a number of leaders in reserve (Kerem Akturkoglu, Olympiu Morutsana, Mbaye Diana) and others and threw them into the battle closer to the final whistle, thereby making a turning point.

The first dangerous call sounded when Aktyurkoglu, after Morutsan's transfer from the front, left all alone and dangerously shot from close range, but Guilherme miraculously rescued the team.

And a few minutes later he was powerless.

The first made a throw from the depth, and the second ran away from the opponent and accurately shot into the far corner.

So the Turk scored the winning goal on his 23rd birthday.

Lokomotiv had nothing to answer to this.

But even the semblance of the final assault was not organized.

Galatasaray, having switched to a scheme with three central defenders, calmly brought the match to the end and strengthened its leadership in the group.

The railroad workers were defeated in European competition after Spartak and Zenit and made their life even more difficult in the struggle for getting into the playoffs.