For the first time in history, the Russian esports team Team Spirit won The International - the Dota 2 World Championship. It won the main prize of $ 18.2 million, that is, more than $ 3.5 million for each player. Initially, the team was not considered as the favorite of the tournament, but was able to win perhaps the most unpredictable victory in its history. 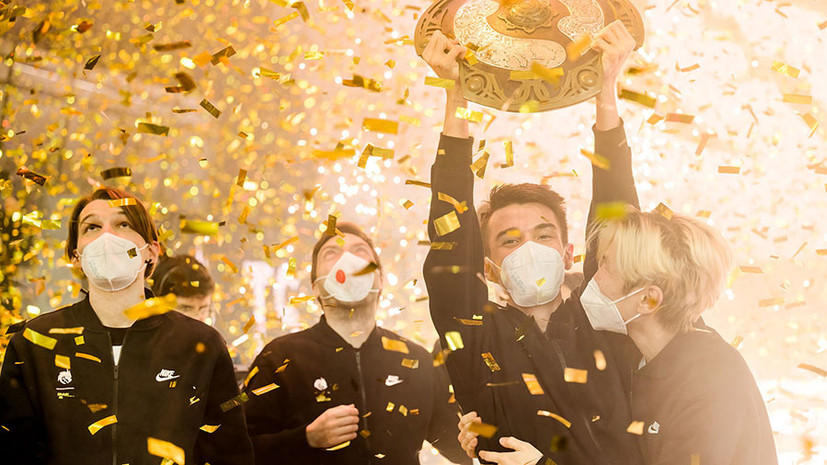 The main Dota 2 tournament - The International - ended with a deafening sensation claiming to be the most incredible esports event of the year. The Russian team Team Spirit won the tenth annual tournament, despite the fact that it was not considered at all even as a "dark horse" of these competitions. In the grand final, she beat the main favorites from the Chinese team PSG.LGD in five matches and earned $ 18.2 million.

The International, or TI, can be called the Dota 2 World Championship - the most popular esports discipline. This tournament has been held since 2011 and has always attracted such heightened attention that many offline sports cannot count on. Its first winner was the Ukrainian team Natus Vincere (Na'Vi). Since then, representatives of the CIS (in esports, it is customary to speak of it as an independent region) have never won TI.

The current draw of The International took place in Bucharest after a two-year hiatus due to the coronavirus pandemic. It was attended by 18 teams from all over the world, including two from Russia. The first was Virtus.pro, which is traditionally one of the main favorites and received a direct invitation to TI. In the past, she managed to split the fifth and sixth places, and this was the best indicator for the Russian teams of all time.

The second participant from Russia was Team Spirit, whose history of getting to The International deserves a separate mention. The roster of the team was formed almost from scratch - to the only well-known fans, player Yaroslav Naydenov (Miposhka), were added completely new partners who had almost no experience on the professional stage. They are Russians Alexander Hertek (TORONTOTOKYO) and Magomed Khalilov (Collapse), as well as Ukrainian players Ilya Mulychuk (Yatoro) and Miroslav Kolpakov (Mira).

The new team did not stand out against the background of other teams from the CIS, however, it was Team Spirit that became the winner of the regional qualification, which took place in June. During this tournament, Miposhka and the company powerfully advanced through the playoffs, but in the final they experienced strong resistance from the well-known CIS team Team Empire. In a series of up to three victories, Team Spirit lost 1: 2, but eventually managed to win two decisive maps (as matches are usually called in Dota 2) and made it to The International.

We did not expect great success from the team, which has existed for less than a year. The coefficient for the victory of Team Spirit was 29 points, which speaks of very modest expectations from this team. In the first matches of the group stage, she really began to justify them - out of the first eight matches, Team Spirit won only two. But then she managed to get together in games with equal rivals and catch a ticket to the upper bracket of the playoffs - it differs from the lower one in that the teams have a chance of losing in one of the series. At the same time, Virtus.pro became the second in the other group.

The main tournament began for Team Spirit with a meeting with IG. The Russian team was defeated and went to get a ticket to the grand final through a more difficult lower bracket. From that moment on, the team began to deliver one sensation after another. Team Spirit beat the winners of the last two TIs - OG, then beat Virtus.pro, which they had lost 29 times in a row, and took revenge on IG. In the final of the lower bracket, the team lost the first match to Team Secret, but managed to win the next two. So, for the first time since 2013, representatives of the CIS made their way to the grand final of The International, where the score is already up to three victories.

As expected, Team Spirit's rivals have become one of the main favorites of the tournament - the Chinese PSG.LGD, sponsored by the PSG football club.

For the entire time of her performances in Bucharest, she lost only two matches out of 23, which is a fantastic indicator.

However, already in the first final map, a real defeat awaited her.

Team Spirit surprised the opponents with a non-standard selection of items for heroes and allowed them to make only five kills.

The next map went just as badly for the Chinese, where they again found themselves helpless, largely thanks to the incredible game Collapse.

Then PSG.LGD was able to show its strongest sides and neutralize the main players of Team Spirit, leaving behind the third map, and then level the score, winning the fourth match in just 25 minutes.

However, in the decisive battle PSG.LGD fought to the last, but each skirmish only increased Team Spirit's advantage.

As a result, the Russian team became the winner of The International for the first time in history and won the main prize - $ 18.2 million, that is, more than $ 3.5 million for each player.