Dynamo lacked composure to keep the victory. This was stated by the head coach of the blue-and-white Sandro Schwartz after the draw in the 11th round of the RPL against Spartak. In turn, the rival's mentor Rui Vitoria called the derby result deserved, since his players fought to the end. He also lamented that the judge Sergei Karasev showed indecision in the episode of the mass brawl. Georgy Dzhikia, who has reduced the backlog in the hosts, jokingly promised to ask the attackers for the lack of goals. Anzor Kavazashvili rebuked Alexander Maksimenko for lack of confidence. And Alexey Safonov, an agent of Konstantin Tyukavin, promised that a mistake in the confrontation would not affect the psychological state of his client. 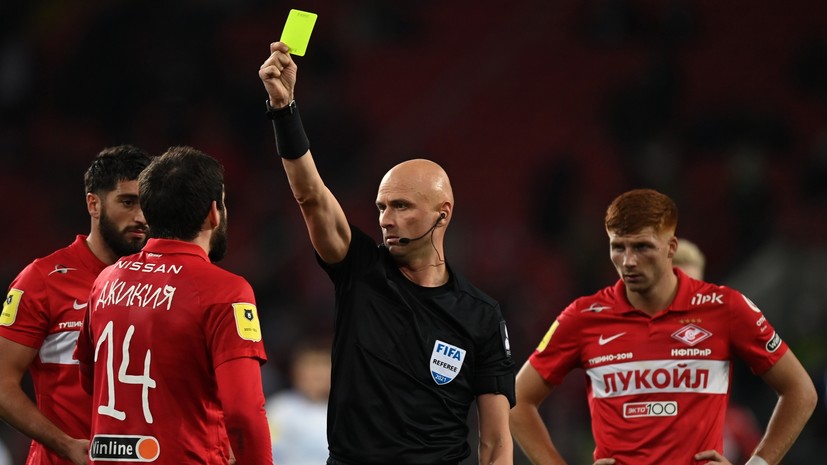 “In the locker room I’ll ask the question, where are the attackers, if I and Gigot score”

The RPL round 11 match between Spartak and Dynamo gave the fans a real spectacle.

It had everything: yellow cards, goals, and even a massive brawl.

Moreover, most of the meeting, the blue and white confidently led the score thanks to the goals of Ivan Ordets and Konstantin Tyukavin and went to an important victory.

However, in the end, the hosts made an incredible comeback and scored twice in five minutes.

Moreover, the gates of Anton Shunin were struck by the central defenders Georgy Dzhikia and Samuel Zhigot.

The head coach of the guests, Sandro Schwartz, after such an unsuccessful finish at the press conference, found it difficult to find his words.

According to the specialist, his charges simply did not have enough composure.

“It was an emotional and intense derby.

For 85 minutes the team played well and scored two goals.

But we didn’t have enough concentration to bring the matter to victory.

We fled to counterattack, but could not score the third goal.

Spartak took advantage of the standards and evened the score.

Nevertheless, I would like to thank my team for the game, "- quotes the words of the specialist" Sport-Express ".

But the hosts' mentor Rui Vitoria called the result of the derby logical, since the red and white fought, created chances and tried to turn the tide of the meeting.

“We deserved this draw by what we did on the pitch.

The struggle was intense.

Sometimes it is not so important to score points as to play in the key in which we are able.

Sometimes it is not easy to change the situation when the pace changes, ”the Portuguese said on the air of Match Premier.

After the final whistle, the fans of the red and white fans were literally ready to carry Jikia and Gigot in their arms.

Georgy looked especially happy, who scored two important goals at once during the week.

First he scored a fantastic goal in the 2022 World Cup qualifying match against Slovenia, and now he upset Dynamo.

“This is a simulated combination that we devote time to.

In the locker room I’ll ask the question, where are our forwards, if in the end I and Gigot score goals, ”the defender promised on Match Premier.

The footballer dedicated his goal to Nikita Simonyan, the Spartak legend, who celebrated his 95th birthday this week.

In turn, Gigot, after the game, was noted for another serious achievement - he gave his first interview in Russian.

“There were very good emotions today.

With the score 0: 2 it was very difficult, but this is Spartak.

The atmosphere is super ", - the press service of" Spartak "quotes the Frenchman.

"Sobolev had to be removed twice"

The confrontation was not without a massive scuffle of football players.

At the end of the first half, Maximiliano Kofrie received a painful blow to the leg from Arsen Zakharyan.

Spartacus immediately stood up for a partner.

Gigot first bumped into the players, and then began to argue with the Dynamo coaching staff.

As a result, the Frenchman, along with Zakharyan, Vyacheslav Grulev and Dzhikia, received a yellow card and, due to too many warnings, will miss the most important game with Zenit.

After the match, the chief referee Sergey Karasev shared his impressions with journalists and did not see anything surprising in the conflict.

“Not an easy meeting.

I will not comment on the brawl, watch the replays.

Derby is as it should be.

There is a lot of time now, everything will be analyzed.

Any derby is always difficult.

Thank God, the players and coaches did not make any claims, ”the referee explained.

However, Vitoria still had complaints about the referee.

The specialist believes that Karasev showed indecision in those minutes.

“He needed to somehow separate the players, to keep the situation under greater control.

I cannot say that there were any open provocations, but rather a usual game moment, ”the Sport24 coach quotes.

In Jikia's opinion, you shouldn't pay attention to the crowd on the edge.

The captain stressed that in such a principled confrontation it is sometimes impossible to do without a splash of emotions.

“If it hadn't happened in the 45th minute, it could have happened later.

Most importantly, everyone left resentment and quarrels on the field.

Therefore, everything is fine.

There was nothing serious with anyone after the game, ”said the defender.

The footballer assured that there were no provocations from the opponents.

But some nevertheless took the side of Vitoria and considered Karasev guilty of the scuffle.

For example, according to the former owner of the red and white Andrei Chervichenko, he chose an overly liberal style of refereeing.

“Alexander Sobolev had to be removed twice: during a fight ... and also when he kicked Roman Evgeniev in the head.

Apparently, he did not want to aggravate, so that later Leonid Fedun would not run and shout that they had lost because of him, ”Chervichenko said.

"Dynamo players should bite their knees"

Most of the experts agreed that Spartak was frankly lucky in the match against Dynamo.

Moreover, in many ways the decisive episode was in the 84th minute, when Sylvester Igbun brought Tyukavin one on one with Alexander Maksimenko with a cool transfer, but he did not get into the near top nine.

As noted by Chervichenko, it was this moment that gave Vitoria's wards a chance for salvation.

“All he had to do was roll the bottom, and he decided to score aesthetically.

Dzhikia and Zhigo are the best in Spartak both in the game and in the fight.

They have been pulling the team for a long time.

Kofriye does not spoil the picture ... The luck has returned to the Muscovites, but they are objectively weaker than both Dynamo and Zenit, - added the ex-owner of the club.

But the former head coach of Dynamo Kirill Novikov explained two conceded goals by late substitutions of blue and white.

Defenders Sergei Parshivlyuk and Saba Sazonov entered the field at the time added by the referee.

“15 minutes before the end of the game, it was clear that the team sagged.

Physically, it became difficult, it was necessary to release new players a little earlier.

In the last 10-15 minutes Spartak pressed Dynamo into the penalty area.

This pressure led to two goals, "- quotes the words of the specialist" Match TV ".

Jikia was not so categorical in his statements.

According to the footballer, the signals that the red and white are able to return were sounded even before Tyukavin made a mistake.

The same opinion was expressed by Schwartz.

The German believes that the blue and white could have scored much more, but in the end they began to allow a lot of mistakes in the transmissions.

“It was a pretty wild game, and it ended like this,” the coach emphasized.

Nevertheless, the current situation should not in any way affect Tyukavin from the point of view of psychology, says football agent Alexei Safonov, who represents the interests of the athlete.

“I struck a centimeter higher, the ball almost flew.

There were two options: to hit like this or to throw.

He played well, did his job.

If there is a surname on the scoreboard, it means that you have already done everything right.

Everything will be normal for him, psychological problems will not arise.

This happens, he didn’t realize one moment, "- quotes Safonov" Championship ".

And as part of "Spartak" the most criticized footballer was Maksimenko.

There was nervousness in the actions of the young goalkeeper, and in several episodes he sent the ball over the side.

The pupil of the club did not play in the best way in the episode with the goal of Ordets.

Legendary Spartak goalkeeper Anzor Kavazashvili spoke out the most harshly on this topic.

“I think he was given some kind of pathogen.

He was shaking on the field!

So many transmission mistakes ... I don't know what happened to him.

Maksimenko should have simply ripped off the striker's ears, who caught the ball, at a corner, ”Kavazashvili said.

However, Vitoria, according to him, plans to continue to trust the goalkeeper, since he is still young and has great potential.

“Maksimenko may have made some mistakes, but I believe in him.

I appreciate his work.

Everything can be corrected.

I can only say that Maksimenko is a good goalkeeper, ”said the coach.

And the former Spartak defender Dmitry Kombarov explained the indistinct game of Spartak by the absence of leaders in the attack - Quincy Promes and Esequiel Ponce.

According to Mostovoy, the opponent's young footballers gave the hosts the points themselves, having relaxed ahead of time and gave up playing.

“The reds and whites looked weak.

There are reasons for this.

Dynamo players must bite their knees.

They missed the victory.

I liked football very much.

I didn't expect this to happen in the end, "Mostovoy said in an interview with Sport-Express.

It's funny that some did not wait for the final whistle at all.

For example, the ex-first racket of the world Yevgeny Kafelnikov, a longtime fan of ten-time champions of Russia, admitted that he left the stadium in the 86th minute and conceded goals from his favorite team.

However, according to him, the match should have ended with a score of 4: 0 in favor of Dynamo.