Leadership with undercool: Shcherbakova surpassed Khromykh and won the short program at the Budapest Trophy

The world figure skating champion Anna Shcherbakova competed for the first time in the new season. She took first place in the short program at the Budapest Trophy tournament. At the same time, the student Eteri Tutberidze, due to under-rotation in one of the jumps, scored the lowest points for herself in the last two years. The second place was taken by Maya Khromykh, who made her debut at the senior level, bypassing her experienced rival in technical assessment. 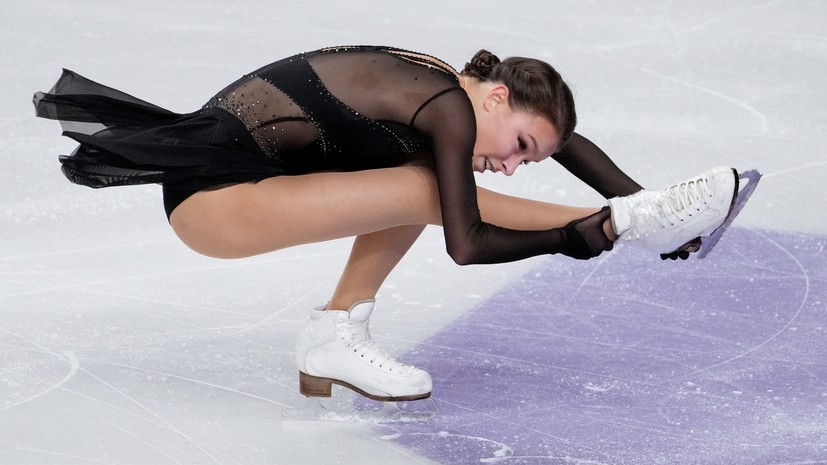 Another figure skating tournament where Russian athletes could show their readiness for the Olympic season was the Budapest Trophy. Initially, three main candidates for getting into the national team were supposed to come to it at once - world champion Anna Shcherbakova, debutant of adult competitions Maya Khromykh and Alena Kostornaya, who recently skated at the Finlandia Trophy. But five days before the short programs, the European champion disappeared from the list of participants, and she was replaced by the previous owner of this title, Sofya Samodurova.

The main expectations from the tournament were related to what Shcherbakova will show, whose readiness for the season raises the greatest questions.

At the September test skates, the student Eteri Tutberidze did not show quadruple jumps, and in the short program she could not make a cascade.

On the whole, her productions looked quite ripe and did not contain serious mistakes, but this has long been not enough for competition in Russia.

Her choreographer Daniil Gleikhengauz said that the world champion barely trained in the summer, but progress in the restoration of quadruple jumps still appeared.

“Everyone has a completely different shape. Each person is individual, everyone has tournaments at different times and different circumstances, because of which they are in shape or not. Anya just lagged behind everyone for two months in preparation, she did not skate. A month of rest, a week of training - and a month and a half of rest. Obviously, it was very difficult to get in shape. There was not much time. At the moment, she already looks better. Of course, the form is still not the same, but we have already restored the quad flip in training. As for the competitions, we will go to the "beshka" (tournament of category "B" - RT.), There we will see if we will go with a quadruple or not. We will decide when we are ready, "Gleichengauz told Sport-Express.

Just before the start in Budapest, alarming news about the skater's condition continued to arrive. In training, Shcherbakova did not avoid falls, including on the vital quad flip for her. But worst of all, she injured her neck muscles and had to wear an impressive tape for a while. Fortunately, she did not have to withdraw from the short program, and the first official start of the three-time Russian champion was not disrupted.

Shcherbakova in a new orange and black dress performed to the oriental music of Kirill Richter and made me immediately forget about any problems with health and preparation. The whole set of jumps, which included a double axel, a triple flip and a cascade of lutz - rittberger, she performed without visible effort and was sure to try to complicate them. But there were some annoying losses - in the last jump there was an under-rotation, to which the judges reacted with a negative assessment. The rest of the technical elements received generous bonuses and fourth levels of difficulty.

The arbitrators did not skimp on the components either.

35.64 points is exactly the same as Elizaveta Tuktamysheva received at the Finlandia Trophy, and slightly less than Kostornaya.

But the second assessment did not have a big impact on the final result.

In total, Shcherbakova earned 74.76 points, which was her worst indicator since November 2019, when she just made her debut among adults.

Immediately after the world champion, Maya Khromykh came out on the ice.

Another student, Tutberidze, surprised her with her truly adult skating, in which she could hardly be called yesterday's junior.

She stated simpler content from a double axel, triple lutz and a flip-toe loop cascade, but she performed the jumps much cleaner, leaving questions only to the edge on the flip.

At the same time, the skater's choreographic elements received fewer allowances than the leader of the competition.

Khromykh symbolically bypassed Shcherbakova in technical assessment, but in terms of components she was nevertheless forced to let her more experienced rival go ahead.

The final result of the 15-year-old figure skater was 72.82 points.

Although she was two points behind, in an arbitrary program, thanks to a confident quadruple sheepskin coat, she can easily recoup, unless Shcherbakova still demonstrates even more valuable jumps.

The third Russian participant Sofia Samodurova should not interfere in their dispute - she has no such trump cards, and retaining the third place at the end of two days will already be a success for the student of Alexei Mishin.