Al-Anbari: I don't know anything about my candidacy to coach the national team...The problem of "Al-Abyad" is not technical

The coach of the Sharjah team, Abdulaziz Al-Anbari, said that he was not aware of any nomination for him to take over the coaching team to succeed the Dutchman, Van Marwijk. The name of Al-Anbari was circulated alongside Al-Ahly youth coach Mahdi Ali on the “social media” accounts, to take over the technical leadership of Al-Abyad, after the results of the security declined. 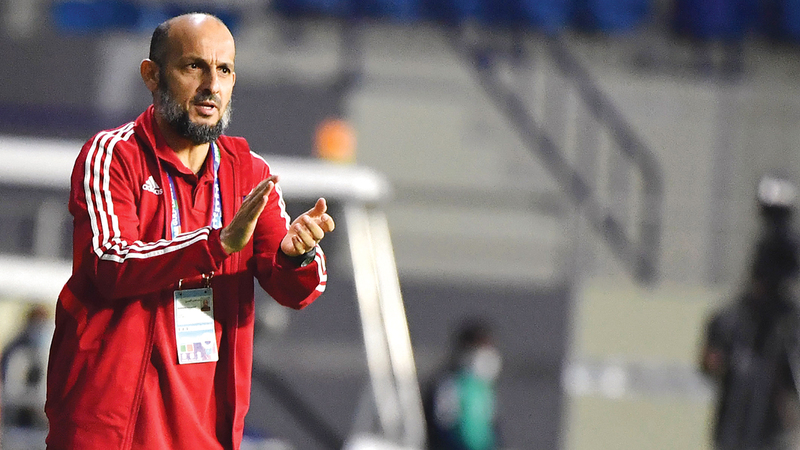 Al-Anbari: I don't know anything about my candidacy to coach the national team...The problem of "Al-Abyad" is not technical

The coach of the Sharjah team, Abdulaziz Al-Anbari, said that he was not aware of any nomination for him to take over the coaching team to succeed the Dutchman, Van Marwijk.

Al-Anbari's name was circulated alongside Al-Ahly youth coach Mahdi Ali on the "social media" accounts, to take over the technical leadership of Al-Abyad, after the team's results declined in the 2022 World Cup qualifiers, under the leadership of Marvik, noting that "technical matters are not the real problem for the team."

The Sharjah coach said in a press statement after the 2-2 draw with Ajman in the Professional League Cup the day before yesterday: "In all honesty, I am not following what is currently being presented on the scene regarding my candidacy for the task of coaching the national team, because I do not have any accounts on social media platforms, and therefore I cannot To make any statements on this matter, and I am not aware of it.”

He added: “I think that the current time is not appropriate to talk about negative matters related to the national team. The players need more moral support in the coming period, and I do not think that the technical aspects of Al-Abyad are the real problem that our team suffers from. There are other things that the national team needs, most notably from my point of view is Psychological aspect and moral support.

We all have to unite behind the players and give them confidence because the qualifying campaign is still long, and the chances of Al-Abyad in qualifying are still there, and we have to trust the team.”

Al-Anbari refused to answer a question about his position if he was offered to train the national team during this period, saying only: "God writes good for all."

As for what happened in the Ajman League Cup match, after the team was satisfied with a tie in the first leg of the first round, the result was considered satisfactory.

He said: “The match was a good opportunity for some players who had not participated in matches before, in general, the confrontation was good for both teams, and the level was high in many times. We knew in advance that such matches are difficult, and the most important thing for us was not to lose It will make our task difficult before the return meeting.”

He explained: "We have put in our calculations that if we do not win, we must not lose, and we have come out with what we aspired to. There is another match that will be in our stadium, and we hope that the result will be in our favour."

• He said that Sharjah achieved the most important thing in the Ajman meeting, by avoiding losing in the cup.

Goran: I am satisfied with Ajman's performance against Sharjah... and the tie is satisfactory

Ajman coach, Serbian Goran, expressed his satisfaction with the performance of his team against Sharjah, despite the draw.

He said in a press statement: “In the second half, we dominated the match, and we could have come out victors.

In general, we will work to correct the mistakes that occurred against Sharjah. We lost many balls in the middle of the field that were bouncing on our goal.”

The Serbian coach indicated, "Our performance improved a lot in terms of attack after Walid Al Yamahi came down, and he helped us in many attempts. I strongly believe in the capabilities of my team and the ability of its players to achieve the results we aspire to."