Tenth match at the top of the Spanish World Rally Championship

Only seven tenths separates leading Thierry Neuville and runner-up Elfyn Evans at the top of the Spanish World Rally Championship after Friday's six distances. - I feel more and more comfortable in the car so I really look forward to tomorrow when the distances are a little more open and rhythmic, says leading Thierry Neuville to WRC-TV after the last stretch of the day. 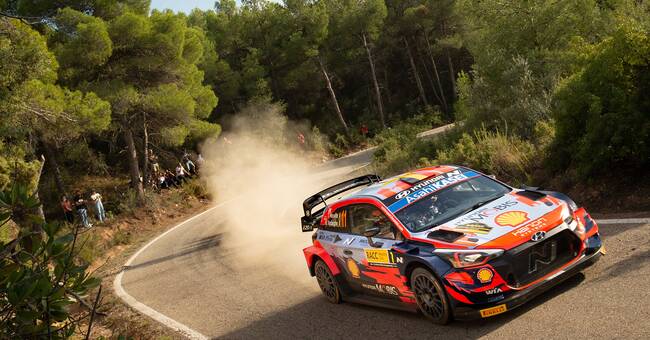 Halfway through the day, the Welshman, second in the drivers' championship, had a lead of 7.9 seconds ahead of the Belgian Neuville.

Neuville struggled with understeer and overheated tires in the morning but in the afternoon he showed his full capacity.

The car worked better and at the same time as some of the competitors were struggling with the gravel that was pulled up on the asphalt roads, Neuville impressed.

He took the lead on the day's penultimate leg and took all three leg victories in the afternoon.

Elfyn Evans had an incident on the penultimate stretch of the day, where he briefly lost control of the car that hit the roadside hard.

But Evans managed to save it and managed without a puncture and is a notch in the heel at Neuville, only seven tenths behind.

- We must look at the positive.

It has not been the best afternoon, especially in the dirtier parts, but it's okay, Evans says.

World Cup leader Sébastian Ogier is in third place but is 18.7 seconds behind teammate Evans.

Ogier has struggled with the settings on the car, which meant that he did not dare to go too full.

- I did not have enough confidence in the car to really push max.

It has not been a bad day, but at the same time I struggled a bit with the car and did not find the perfect rhythm, says Ogier to WRC.

Oliver Solbergs has been clear from the start that the main focus here in Spain is to gain experience in the WRC car, peak times are not a priority.

The 20-year-old has followed his plan and worked with the settings on the car during the Friday stage and is in eighth place overall.

Katsuta and Tänak broke for the day

Takamoto Katsuta, Toyota, was forced to break for the day already after the initial stretch after driving into a railing and totally destroying the wheel suspension on the left front wheel.

Ott Tänak was sixth in the rally but was also forced to break after damaging the car on stretch four.

Still unclear if Tänak and Katsuta will restart tomorrow.

SVT broadcasts live both Saturday and Sunday from the Spanish World Rally Championship.