Strengthening discipline, trust of young people and changing the vector: what Lokomotiv can become under Gisdol

Lokomotiv Moscow this week will play its first match under the leadership of the new head coach Markus Gisdol. The 52-year-old specialist has already been introduced to the players. It is reported that he made some changes to the usual daily routine and ordered football players to come to training sessions at least two hours before their start. Railway goalkeeper Marinato Guilherme stressed that the team will try to adapt as quickly as possible to the requirements of Gisdol. 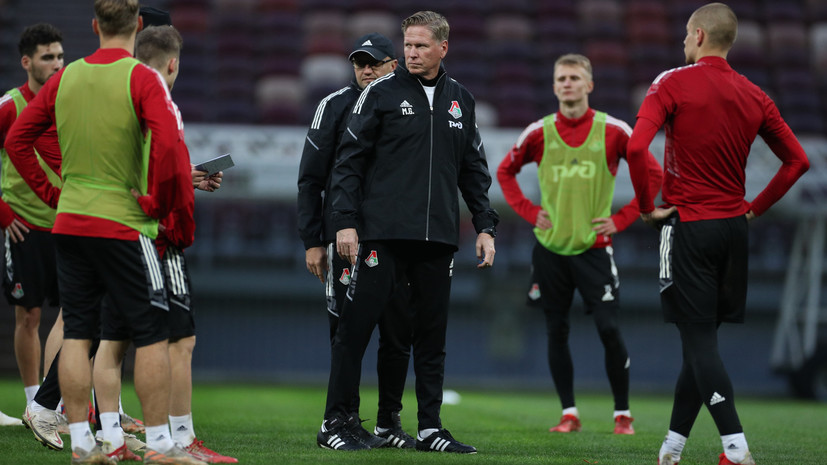 While everyone was watching the games of the qualifying stage of the 2022 FIFA World Cup, a staff reshuffle took place in one of the leading RPL clubs.

The post of Lokomotiv head coach was replaced by Marko Nikolic, a German specialist Markus Gisdol, who previously worked in the Bundesliga.

On Wednesday, he held the first training session with the Moscow team, and on Saturday he will take the railroad workers to an away match with Rubin in the 11th round of the RPL.

“I accepted this challenge with great enthusiasm.

Now I am with Lokomotiv with all my heart.

The championship is in full swing, we do not have time to swing.

This is also why there is a lot of work ahead, ”the press service of the Red-Greens quotes the specialist as saying.

First of all, Gisdol made serious adjustments to the team rules regarding training attendance, and ordered the players to come to classes no later than two hours before their start.

This was announced by journalist Ivan Karpov in his Telegram channel.

Judging by the comment of the former Stuttgart player Alexander Gleb, the life of the team will really change significantly in the near future.

“He has a great desire to pass on his experience so that the guys act very calmly on the field even in the most stressful situations.

He is demanding because this is a professional team and he is used to it.

I think that soon the guys will begin to understand well his requirements and attitudes towards matches, ”Gleb said in an interview with Match TV.

The players themselves are still calm about the changes.

As the goalkeeper of railroad workers Marinato Guilherme admitted, everyone is trying to quickly adapt to the requirements of Gisdol.

“Everything is good at Lokomotiv.

Yes, the head coach has recently changed, but this is part of football life, ”the goalkeeper Sport24 quotes.

In turn, striker Fyodor Smolov, who also just returned from the location of the Russian national team, complained about the difficult calendar of railway workers.

After leaving for Kazan, Lokomotiv will have two home matches: with Galatasaray in the Europa League and with Sochi in the RPL.

“Now our task is to go through a difficult segment.

We have three matches in ten days, difficult opponents.

In addition, many guys played for their national teams.

To get the maximum points in the next meetings, you need full dedication in training, ”- stressed the forward.

The main questions that concern Lokomotiv fans are: what kind of football will the team play at Gisdol and what tasks will be set for it in the current season.

During his career, the German specialist was the head coach at Hoffenheim, Hamburg and Cologne.

In all three cases, he came in difficult moments for the teams.

Markus had to save the teams entrusted to him from relegation from the elite division, and he successfully coped with the task.

However, Ghisdol's best result in the Bundesliga is not impressive - only eighth with Hoffenheim in 2014/15.

A year earlier, Sinsheim under his leadership took the ninth place with the Bundesliga record for both goals scored and goals conceded - 72:70.

Probably, the 52-year-old specialist is the candidacy of the current head of the sports and development department of Lokomotiv Ralph Rangnik.

They worked with Markus twice in Germany: in 2009 at Hoffenheim and in 2011 at Schalke.

According to the head coach of "Dynamo" German Sandro Schwartz, Gisdol has a clear handwriting that the Moscow team will have to master.

“He worked well and successfully in the Bundesliga.

Confirmation of his class is that under Gisdol the teams did not take off, although they were in a difficult situation.

He is competent enough in his field, "Championship" quotes the German.

At the same time, the combination game is not his style.

This opinion about the new coach of Lokomotiv was expressed by Andreas Bonengel, reporter and presenter of the German Sky TV channel.

Markus - for the fastest delivery of the ball to someone else's goal in the shortest possible way ... Active pressing, fast switching from defense to attack and vice versa.

This is the football that Rangnik preaches, ”Bonengel said in an interview with Sport-Express.

However, it does not always bring results, and there are other disadvantages in Gisdol's work.

According to commentator Roman Naguchev, who specializes in German football, none of Marcus's teams had the proper discipline and order, so his invitation to Moscow is surprising.

“In my understanding, Nikolic is more suitable as a conductor of Rangnick's ideas than Gisdol.

For Ralph, discipline, strict adherence to his functions on the field, a certain selection of performers for a certain game model are in the first place, "Sport-Express quotes Naguchev.

At the same time, many experts agree that Gisdol has one significant advantage: he knows how to find talented football players and restart the careers of older ones.

“He discovered Niklas Süle, Kevin Folland, Anthony Modest and also Roberto Firmino, who played for him at Hoffenheim.

Gisdol could somehow reach out to young footballers.

And last season at Cologne he also found some interesting performers.

I agree with the commentator and Bonengel, who added: the commands for Gisdol's work were not the easiest ones.

After all, you need to have the courage to put the youth in the main team when you are fighting for survival.

But the former president of Lokomotiv, Nikolai Naumov, sees in the changes that have taken place solely a desire to build a new business model and ensure income from the purchase and sale of football players.

Therefore, the club, in his opinion, today does not need a coach, but an obedient administrator.

“Gisdol will not determine anything in Lokomotiv - neither the composition, nor the tactical formation.

He will not perform coaching work in the form in which we imagine it.

Gisdol will have to do what Rangnick says, ”Naumov quotes“ Sports day after day ”.

But the leadership of the red-greens will benefit from the mentor's ability to find talented players.

This will help you sell them profitably in the future.

But the ex-president of Muscovites believes that such a development model is not suitable for the club.

“For Lokomotiv itself and for football in general, there are only one drawbacks.

Such a system of making money through buying and selling will necessarily lead to a deterioration in sports results, although Lokomotiv will not drop low and will be in the top five.

In terms of business, the new management hopes that the project will be successful.

But it's not a fact that everything will come together, ”the functionary added.

Also, according to Naumov, one should not be afraid that Rangnik might leave Lokomotiv for Newcastle.

On October 7, the State Investment Fund of Saudi Arabia became the new owner of the "forty", and rumors immediately appeared about the departure of the German functionary to England.

“I think Rangnick won't leave until he fixes everything.

His system should work, ”said Naumov.

The ex-president of Lokomotiv believes that after that he will leave the executive director in his place and go to Newcasal, where even more money has come.

In all the transformations of railway workers, there is one but: the club's management has never yet communicated with the fans, who in recent years have become accustomed to influencing personnel changes.

Although the first step has been taken: a big press conference is scheduled for October 19, at which they are going to talk in detail about the club's development strategy.