"Fedor is a danger to any heavyweight": Gabdullin on Emelianenko's fight at the Bellator tournament and Minakov's career

Fedor Emelianenko's ability to make non-standard decisions during the fight and break the opponent's battle plan allows him to remain a threat to any heavyweight in mixed martial arts. This was stated in an interview with RT by the head of the MMA Union of Russia, Radmir Gabdullin. According to him, in this aspect, no MMA fighter can compare with the Last Emperor. The functionary also shared his opinion about the future opponent of the legendary athlete, Timothy Johnson, and advised Vitaly Minakov to end his professional career. 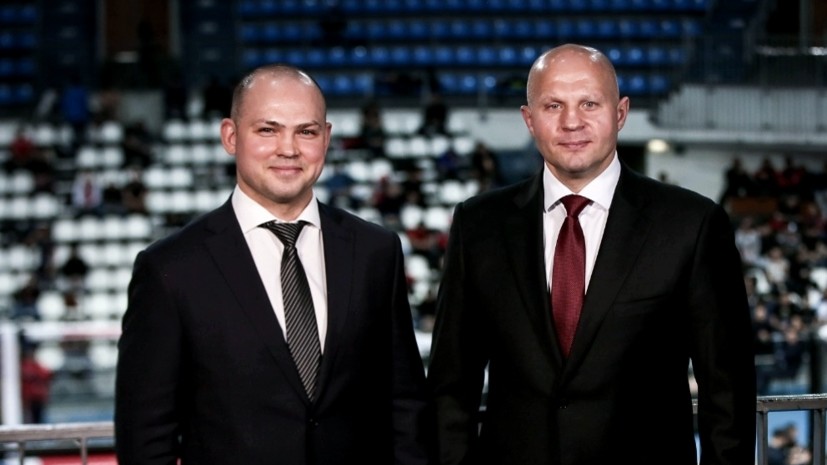 , three striking events with the participation of Russian fighters will take place

What interests you the most?

- Of course, first of all, the fight of Fedor Emelianenko.

Before Aljamain Sterling refused to compete due to injury, their rematch with Petr Jan came in second place.

Nemkov is on the third line.

- If Anthony Johnson could still fight with Nemkov, would the order still remain the same?

- Were you surprised by the choice of Timothy Johnson as a rival to Emelianenko?

- How could he surprise me?

- Johnson is not the most popular fighter, which negatively affects the level of excitement.

But at the same time, it is dangerous enough to spoil Fedora, possibly the last fight of his career.

- Johnson is a fighter who knows how to endure, maintain the pace and correctly distribute his forces for the entire fight.

These opponents are the most difficult.

Personally, I have never seen Fedor evade a meeting with this or that opponent, choosing.

Emelianenko is one of the few athletes who are ready to fight with anyone - regardless of height, weight, experience of performing in certain promotions.

- Is the victory over Johnson a rather spectacular point in Emelianenko's career?

- Because you expect something more memorable from the last fight of Emelianenko.

Of course, one cannot count on a rematch with Mirko Crocop, but another fight with Rodrigo Nogueira or Fabricio Werdum would certainly have attracted more attention from the audience.

- Given his current form, Nogueira will not last even a minute with Fedor.

Some information reaches me.

As far as I know, he doesn't even train now.

- What can you say about Werdum?

- With Fabricio, things are a little different.

Perhaps he could compete with Fedor, but the PFL is unlikely to let him go.

Personally, I don't know who could be Emelianenko's rival among the fighters available to Bellator.

- Most recently, Alistair Overeem and Junior dos Santos signed contracts with the promotion.

Do you think their fights with Emelianenko would be less interesting?

- As I understand it, neither Overeem nor Dos Santos showed any particular desire to fight Emelianenko.

Regardless of age, Fedor represented, represents and will represent a danger to any heavyweight on the planet.

And it's not even that he is a puncher.

The main thing is how he thinks during the fight, what non-standard decisions he makes, how he breaks the opponent's game plan.

There is not a single fighter of this level in the world.

I trained with him and I know what I'm talking about.

- At one time, Emelianenko was considered the most versatile fighter of mixed martial arts, but in recent years he practically does not resort to wrestling skills, does not initiate transfers to the ground.

- If you look at his performances in PRIDE, Rings and a number of other organizations, you will notice that Emelianenko first of all tries to work in a rack.

If he hits, then he no longer switches to the fight.

If you see that you are more skilled in striking technique, faster, more precisely, then why transfer your opponent to the floor?

- Let's imagine that all Emelianenko's former rivals are alive and well.

Who would you like to see as his opponent in a farewell fight?

- But what about the remake of the legendary fight with Crocop?

This is the classic

What is this classic?

Look at the careers of both fighters - they are not comparable.

Yes, the revenge of Fedor and Mirko is a bright sign, it would be interesting to see behind this.

But Crocop is not Emelianenko's rival.

I say this as an athlete.

- Explain your choice in favor of Werdum.

- He is now on the move, actively training, performing.

In addition, the denouement of the first battle was very striking.

Fabricio misses a series of punches, falls and wins by choke.

As a specialist, it would be interesting for me to see where the revenge would end - in a standing position or in the stalls.

After all, Emelianenko and Werdum may hack to death.

In addition, this is considered to be the first full-fledged defeat of Fedor in his career.

Then this event shocked the world of mixed martial arts.

Therefore, to see the return duel is a common desire of many people.

I heard about this from many fighters, representatives of regional MMA federations.

In your opinion, how would this affect Fedor?

When he prepares for battle, he abstracts from all that is superfluous.

Fedor is concentrated, collected, mobilized as much as possible.

could take such a step?

- It's better to ask Scott Cocker - how interesting is Alexander's performance at the Moscow show.

- Recently, Emelianenko Jr. had a fight with blogger Artyom Tarasov.

- To be honest, I'm not interested in Alexander's career or personal life.

I watch the immigrants of the MMA Union of Russia who are related to the teams of Fedor Emelianenko, Khabib Nurmagomedov.

I would like to follow the battles of the Nemkov brothers, Usman and Umar Nurmagomedov, Vitaly Minakov, Valentin Moldavsky, Kirill Sidelnikov.

- Many of the aforementioned fighters will perform at

Don't you think that if he wins, he can be assigned a fight with Moldavsky for a temporary heavyweight belt?

- In my opinion, Minakov needs to be engaged in social and social activities.

He's very good at it.

He is a unique athlete who has achieved tremendous success in both amateurs and professionals.

But I see the pace at which he is developing as a person, as a functionary.

Vitaly has all the inclinations and qualities to prove himself in this field.

- But in fact, this means giving up hopes of becoming the

, trying your hand at the

But Minakov has enough talent to succeed in this.

- When you talk about such things, I myself want to resume my career (

Seriously, I wish Minakov a victory at the Moscow Bellator tournament.

I want him to take over again, to raise the Russian flag over his head.

But after that you have to leave.

I advise him as a friend, comrade in arms.

- What advice would you give to Alexander Emelianenko?

- If I understood what is happening in his life now, I could say something definite.

When we trained in the same team, Alexander was a unique fighter.

I personally stood with him in pairs, fought.

In those days, it was difficult to name the same diversified athlete.

If he kept training, stayed on track, he would be the coolest champion in UFC history.

- Many said that Alexander was more talented than Fedor.

- I disagree with that.

Perhaps Alexander has the same inclinations, a talent for assimilating information.

But in our team there has never been a fighter capable of using the accumulated knowledge as effectively as Fedor.