Toronto's Swedes delivered when the team took on Canadian rival Montreal at home. Pierre Engvall became the first of the NHL's 71 Swedes to score a goal this year's season. And William Nylander's goal was decisive in the 2-1 victory. - It was very special, says Nylander. 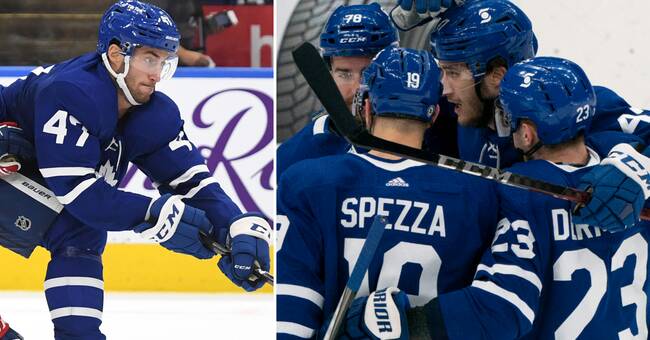 The Toronto players did not have much to complain about when it came to the framing for the season's first match.

Although a protest took place outside Scotiabank Arena where hundreds protested against vaccination requirements that made it impossible for children to play sports in an organized manner, the arena was almost full despite vaccine requirements for the audience.

- It feels like it was so long ago that we played in front of supporters last time.

So it was fantastic to have them in the building, says William Nylander smiling at the press conference after the match.

He also had to crown the season with the decisive goal, a safely placed delicacy in the right cross.

The third period was only a minute old when Nylander ran in from the replacement booth.

He got a nice pass from Morgan Rielly and after advancing a few meters he sent the shot away.

But it was another player who became the first of the league's 71 Swedes to score this season.

Nylander's teammate Pierre Engvall jerked his wrist just over halfway into the first period in numerical superiority, and in the crowd in front of goal, the puck looked past Montreal's cage keeper Jake Allen, which meant 1-1.

Back talent Rasmus Sandin was involved in the preparation, and was rewarded with an assist point.

It was Pierre Engvall's first powerplay goal in the NHL.

- I think he has been very good.

He is super fast and strong in the pre-check and in numerical inferiority.

I think he has done a great job fighting his way into the squad, says Nylander.

A few minutes before the first Swedish goal, Montreal's Jonathan Drouin had given the guests the lead in the first all-Canadian match in this year's league.

Bäckström is said to have problems with one hip, and will miss at least another nine matches.

Despite this, Washington made the process short with the guests and eventually won 5-1, after two goals and two assists by the Russian superstar Alexander Ovetchkin.

With goal number two, Ovetchkin passed Marcel Dionne in the number of NHL goals scored, and is thus fifth on the list with 732.

For Rangers, Nils Lundkvist missed the season premiere due to injury.