The NHL's two youngest teams made up for it in the premiere. Seattle opened solidly - before Vegas put the newcomers in place. But video scrutiny was required to determine the crucial goal. 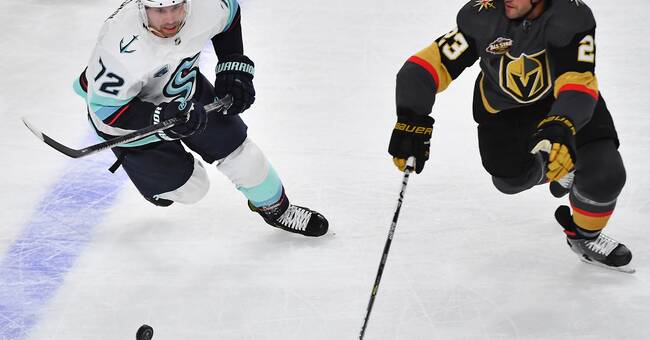 Seattle is back in the NHL, and in its premiere match, the Swedish team had to face the league's second youngest team, Vegas, away in the Nevada desert.

He barely touched the ice before Seattle - who last had an NHL team in 1975 - showed that they were hungry for NHL ice hockey.

Robin Lehner in the Vegas goal immediately got sweaty, and within 20 seconds it rang in the crossbar after a lightning attack.

Lehner was a big reason why Seattle did not go to the period break with a lead, the Swede was responsible for several important saves.

After all, it was not a dream start for Seattle.

Vegas instead showed the newcomer what a pattern attack should look like when Mark Stone, Chandler Stephenson and Max Pacioretty went up in line.

Pacioretty fired the shot, and Seattle Kraken's first conceded NHL goal in history was a fact.

Just over three minutes later, Jonathan Marchessault taught how to make a draw, when he rounded Philipp Grubauer in the Seattle box.

The second period did not start better for Seattle, when Pacioretty scored his second goal of the evening.

Vegas has only lost a three-goal advantage once during its time in the NHL - the team made its league debut in the 2017-18 season - and that was 2018.

But Seattle made a valiant recovery attempt.

Ryan Donato got to write history by scoring Seattle's first goal in the regular season.

25-year-old Donato has played Olympic ice hockey for the USA in Pyeongchang and was last seen in the San Jose jersey.

The goal was the 36th in his career, and came on a return.

The reduction came via Jared McCann and in the third period the equalizer to 3-3 was a fact, through Morgan Geekie.

But Seattle did not come closer to a victory than that.

Half a minute later, Chandler Stephensons scored the 4-3 goal for the home team, which was the last for the evening.

But a video review was required to establish that Stephenson steered - and did not kick - into the decisive puck.

On the night before Friday, Seattle gets a new attempt to pinch a first historic victory.

Then Nashville stands for the opposition.

CLIP: This is the Seattle Kraken (October 12)

This is the Seattle Kraken