"In the heat of the moment, we all go for our own sake"

The women's skiers' crash and media aftermath at the World Cup in Ruka last year created strong feelings and divisions in the team, which is portrayed in the new SVT documentary series "Best when it comes to". The incident has given the national team reason to discuss how they can better handle similar situations - and how crashes between Swedish skiers should be avoided in the future. - We have talked about how we should act when disappointment and frustration take over. I see what happened in Ruka as a lesson, says Ebba Andersson to SVT Sport. 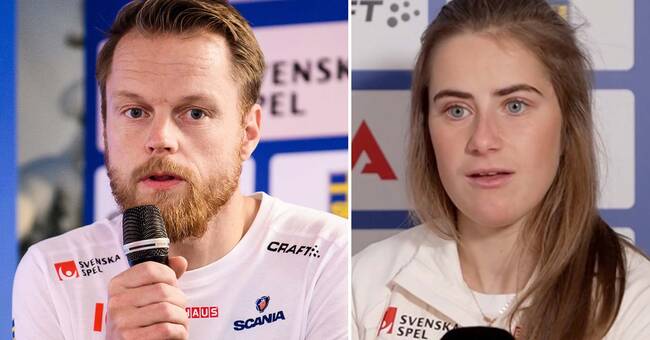 Three out of four Swedish skiers fell over in the downhill run in Ruka.

The crash is not the first time that blue and yellow skiers have done it for each other.

The most famous previous example is perhaps the World Cup sprint final in Seefeld, where Jonna Sundling and Maja Dahlqvist fell in the last corner before the race.

The documentary hears how a disappointed Maja Dahlqvist, after the race in Ruka, asks herself: "Why are we Swedes always ruining for each other?"

- Every now and then you are pissed off and then it flies out a little bit of anything.

If you had thought twice more, you might not have said exactly the same things.

But what they reflect on is that it was Swedes who felled each other again, says Maja Dahlqvist to SVT Sport now almost a year later.

Have you talked about being more careful if you are lying together?

- Yes, but we did that before Ruka as well.

It's getting a little hot when it comes down to it.

"We got closer as a team"

What also appears in the documentary is that Ebba Andersson reacted strongly to the fact that Linn Svahn in the interview with SVT after the race pointed her out as the one who was to blame for the crash.

Something that, according to national team manager Anders Byström, led to constructive conversations within the group.

- That was a hot situation that became very big, but which we immediately addressed and talked about.

We thought about what we thought, was it respect for each other what happened afterwards?

And it turned out well in the end, I think we got a very good effect from it.

That we got closer as a team, he says.

Andersson believes in using each other

As a Swedish skier, should you be more careful when you have white suits (the color of the Swedish national team uniform) around you?

- We can not be careful in a World Cup or a World Cup because then we let past other nations, must be tough no matter who it is.

But of course, a Swedish costume is sacred somewhere as we say in the documentary, says Byström.

Ebba Andersson, who involuntarily played a major role in the aftermath of Ruka, also feels that the situation in retrospect brought something good with it.

- In the heat of the moment, we all go for our own sake and it does not matter if it is a white, red or other color on the suit.

But you may have to think a step further from time to time.

Instead of the horns going out even more, you can instead try to take advantage of the fact that we have so many white suits far ahead.

The documentary series "Best when it comes to" consists of five episodes that are released once a week.

Watch the first episode on Sunday on SVT Play.

CLIP: Here is the drama in the sprint final

From the archive: See the drama in the sprint final