The fifth round of the ADNOC Professional League revealed all its secrets, and the coaches were the most prominent sign in this round, which witnessed the suspension of Al Ain victories, a strong return to Sharjah, and the continuation of the tie knot in chasing Al Wahda, while the results of the title holder, Al Jazira, continued to fluctuate, and the runner-up crisis continued. 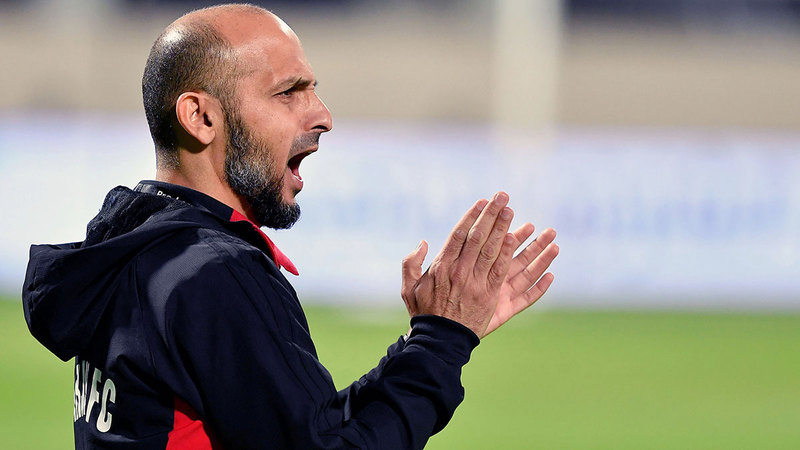 Khaled Obaid: The matter of unity and connection is strange, and Al-Anbari made the difference.. And the audience confirms:

The fifth round of the ADNOC Professional League revealed all its secrets, and the coaches were the most prominent sign in this round, which witnessed the suspension of Al Ain victories, a strong return to Sharjah, and the continuation of the knot of draws in chasing Al Wahda, while the results of the defending champion, Al Jazira, continued to fluctuate, and the Bani Yas runner-up crisis continued. On the other hand, Sharjah maintained its hopes of competing, overcoming the effects of the loss from Al-Ahly youth, and achieving an exciting victory over Al Jazeera. And the fifth round showed that it was a round of coaches, who played a major role through their tactical interventions and decisive substitutions in changing the course of many matches, as happened in the exciting Al-Arabiya tie with the leader Al-Ain, and in the return of Sharjah against Al-Jazira and others. This affected the confusion of the leadership cards, as only four points separate the fifth victory from the leader, Al-Ain, with 12 points for Sharjah, 11 points for Al-Ahly's third youth, and 10 points for the fourth Al-Jazeera.

And the newspaper "Emirates Today", through its account on Twitter, asked a question about the public's opinion on this tour: We shared the opinion.. Al-Ain and Al-Ahly youth draw and Al-Jazeera lose.. What is the prominent mark in the matches of round 5 of the professional league? Three answers were monitored: the bench, the coaches' tactic, the difference in the potential of foreigners. And 56.9% of the voters chose the work of trainers, while 21.9% chose the capabilities of foreigners, and 21.2% for the substitutes. The coaches, Tunisian Fathi Al-Obeidi (Al-Orouba), Serbian Goran (Ajman), Brazilian Caio (Khorfakkan), and the distinguished Sharjah coach, Abdulaziz Al-Anbari, featured in the tour. Al-Anbari was able to lead his players despite the numerical shortage after the Brazilian Bernard was expelled, and won a victory using the bench on Al-Jazira, while the latter failed to maintain its lead, and also suffered due to an early expulsion of Khalifa Al Hammadi, which made the team lose its luster a little by losing five points in the first five rounds.

Al-Ain worried his fans with a disappointing tie against Arabism, despite his progress by three clean points, to receive three goals, and he could have returned defeated in front of the newly rising Arabism to the spotlight, had it not been for bad luck, and for the leader to raise concern in what is to come, as Al Ain begins a series of difficult matches in the coming period. The beginning will be in front of the unit.

The meeting of Al-Wahda and Al-Ahly youth ended in a disappointing tie for both parties, causing concern and confusion, between one match and another, Al-Ahly youth who defeated Sharjah in the fourth round, other than the one who tied with Al-Wehda in the fifth round, as well as Al-Wahda who strengthened the ranks with players such as the Brazilian Pedro, and the international Mahmoud Thursday, however, is still far from the competition.

Al-Nasr achieved an exciting and important victory over the "Falcons" team with a clean four. On the other hand, Al-Wasl fans continued to be confused, after they drew with great difficulty with Kalba, while Ajman advanced strongly and came at the expense of Baniyas, and the orange now has eight points, and overtaken Al Wasl and Al Wahda are in the standings, in addition to Khorfakkan achieving the first victory, and it was at the expense of Al Dhafra team with three clean goals.

As for the bottom of the league, the conflict is still ambiguous, as Al-Uruba has three points from three draws, while the "Hawks" team is finally without points, and it is now required to quickly correct the course before it is too late.

Technical analyst Khaled Obaid confirmed that the fifth round was divided into two parts between the first day, which witnessed a disappointing tie for Al-Wehda with Al-Ahly youth, and the drop in the eye level in a worrying manner, in addition to Al-Wasl, which did not provide anything. He told "Emirates Today": "The matter of unity and Al-Wasl is strange this season. Al-Annabi is currently suffering offensively, and Al-Wasl has not presented anything, despite the inclusion of four foreigners, Lima, and resident players. The newly promoted Oroba, who proves match after match that he is able to survive.”

He added, "Al-Nasr was naturally to win because of the bad situation that (the Falcons) is going through, and the lack of stability in the formation. As for Al-Jazira, it lost due to the lack of good reading of the match, with a preference for coach Abdulaziz Al-Anbari, who succeeded in returning quickly after the loss to Shabab Al-Ahly."

The Baniyas team became a puzzle after a great season, in addition to Khor Fakkan, who succeeded in achieving a logical victory over Al Dhafra.”

Scenes from the tour:

Al-Ain's top scorer, Togolese Laba Kodjo, once again proved that he is a top-ranking scorer, and succeeded in scoring a hat-trick, three goals in the Al-Ain and Al-Orouba match, to become the league's top scorer with nine goals.

The bet will be greater on him in the upcoming strong matches, especially against a solid defense such as Al Wahda's defense in the sixth round match.

The coach of the Orouba team, Tunisian Fathi Al-Obeidi, proves, from one match to another, that he is one of the distinguished coaches.

He succeeded in snatching three points in the tournament so far, from strong teams, after drawing with Shabab Al-Ahly and Al-Ain as well as Ajman, which means the team's ability to match all teams.

It was clear the coach's high ability to read the course of the match, and make substitutions that add to the team, especially in the second half (the coaches' half).

The Ajman team found its lost in the Colombian striker Burles Mina, to return (orange) to its previous era in the middle of the table, and became a strong competitor in the standings table with the midfield teams, unlike last season, which the team escaped by staying in the league championship in the last round, after it was Officially close to landing.

To view the issue in full, please click on this link.