5 technical factors behind Sharjah's superiority over the island

Sharjah managed to turn its delay against Al-Jazira with a goal without a response, to a valuable victory with two goals against a goal, during the meeting that brought them together, the day before yesterday, at the Sharjah Club Stadium, within the fifth round of the Professional Football League (ADNOC). Although Al-Jazira advanced with an early goal, It was scored by striker Ali Mabkhout. 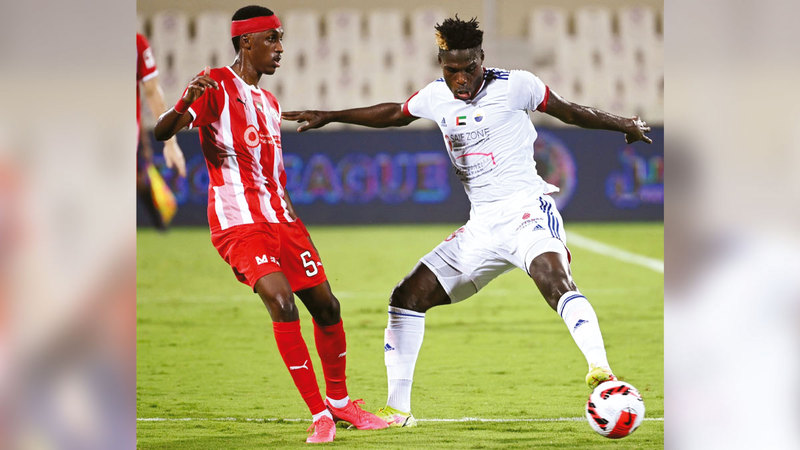 Most notably the interventions of Al-Anbari, the expulsion of Al-Hammadi, and the withdrawal of Joao

5 technical factors behind Sharjah's superiority over the island

Sharjah managed to turn its delay in front of Al Jazeera with a goal without a response, to a valuable victory with two goals against a goal, during the meeting that brought them together, the day before yesterday, at the Sharjah Club Stadium, in the fifth round of the Professional Football League (ADNOC).

Although Al Jazira advanced with an early goal, striker Ali Mabkhout scored only two minutes after the start of the match, but he did not maintain his superiority, so that Sharjah could turn the table and score two quick goals in the second half.

Sharjah jumped to the runner-up position with 12 points, only one point behind the leaders Al Ain with 13 points, while Al Jazeera fell to fourth place with 10 points, and five technical factors contributed to the turn of the table, and Sharjah changed the game for its benefit in a dramatic way, and inflicted a loss The first in the league on the island, most notably the successful interventions of Sharjah coach Abdulaziz Al-Anbari, and his adventure in playing and pushing both Ahmed Al-Attas and Khaled Bawazir, who managed to score the equalizer from his first touch of the ball (82), and the ingenuity and brilliance of the Congolese striker Ben Malango, who succeeded in scoring The winning goal for his team “86”, with a great individual effort, after receiving a quick ball, along with the expulsion of Al Jazira defender Khalifa Al Hammadi “50”, who represents a valve in front of Al Jazira in the back line, for assaulting the Sharjah player Shukorf, as well as the incorrect reading of the match, and the interventions Unsuccessful for the Dutch coach Marcel Kaiser, especially his withdrawal of the Brazilian player JoaoVictor "65", who was considered the most active and dynamic Al Jazira player, assisted Mabkhout's goal. The expulsion of Dutch coach Marcel Kaiser at the beginning of the second half affected the morale of his players, and his expulsion caused confusion in his team.

Although Sharjah played (minus) 10 players, after Brazilian player Bernard "68" was expelled for obtaining the second yellow card, the moves made by coach Al-Anbari contributed to the cohesion of the team.

Roy: We don't understand why Marcel was fired

Al-Jazira assistant coach Roy Hendriksen confirmed that although they are upset and frustrated with the result of the match, they are satisfied with the strong personality and fighting spirit shown by the players, noting that they have some reservations, such as the expulsion of coach Marcel Kaiser, indicating that he does not understand the reason for his expulsion.

He added in a press conference: "At the beginning of the match, we made a great physical and mental effort in order to maintain progress, and we were disciplined in defense, but the fatigue resulting from the numerical shortage in the last minutes caused the players to lose focus, so that we conceded two goals."

Al-Anbari: The substitutes make the difference

"There was no team better than the other during the match," he added during the press conference.

Al-Anbari praised the brilliance of Al-Jazira goalkeeper Ali Khaseef, describing him as one of the best goalkeepers.

1- Al-Anbari's adventure and his successful interventions.

2- The ingenuity of Malango and his recording in killer timing.

3- Al-Jazira was affected by the expulsion of Al-Hammadi defender "50".

4- Unsuccessful interventions by the coach of the island.