To the fullest: NBA stars may miss half of the season due to refusal to vaccinate against coronavirus

Brooklyn point guard Kyrie Irving may be banned from training and playing at the team's home arena in the 2021/22 NBA season. This is due to the introduction in New York and San Francisco of laws according to which those unvaccinated against coronavirus will not be able to attend mass events. Golden State forward Andrew Wiggins hopes to avoid a similar fate by getting permission to refuse vaccinations for religious reasons. 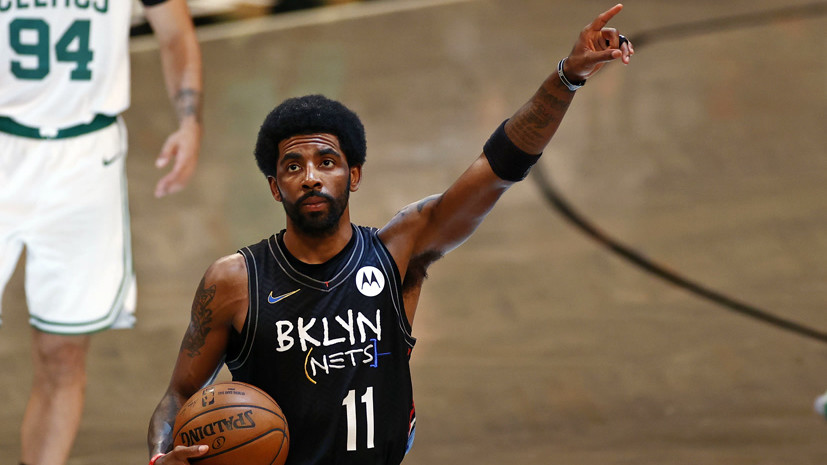 Less than a month is left before the start of the NBA regular season of the 2021/22 season. However, the risk of a situation where some teams will be in obviously more difficult conditions than others is already being discussed with might and main. The coronavirus vaccination certificate is acquiring colossal importance, the absence of which may cost some athletes the opportunity to visit their team's home stadium both to play in official matches and to participate in training sessions.

As far as we know, one of the leaders of Brooklyn, Kyrie Irving, can get a ban on visiting the club's home arena. According to Fox Sports, he refused to be vaccinated, and therefore his prospects for the upcoming season have become extremely dim. Now he is not allowed to participate in training sessions and prepare for the start of the season, which is scheduled for October 19.

Just three weeks ago, NBA clubs were informed that New York is introducing new rules for visiting certain indoor spaces, including the Barclays Center and Madison Square Garden stadiums, where matches are played. Brooklyn Nets and New York Knicks. According to the decree, from September 13, persons over 12 years old are prohibited from visiting these arenas, as well as gyms and fitness centers in the absence of confirmation of full or partial vaccination against coronavirus. The only exception is the documented conclusion that vaccination is not possible for medical or religious reasons.

Representatives of the Golden State Warriors will face similar difficulties.

The only difference is that in San Francisco, unvaccinated people will be banned from attending mass events from October 13.

Meetings within the NBA season at the 18,000th Chase Center fall into this category.

It is noted that slightly less stringent restrictions were introduced in Toronto, where those who have not been vaccinated will be able to take part in games if they have a negative test for COVID-19.

But at the same time, they will be prohibited from contacting anyone other than teammates, as well as leaving the hotel.

There is every reason to believe that Irving will not be the only one in the NBA who may experience the voiced problems.

According to various sources, from 85% to 90% of the league's players were vaccinated against COVID-19, which means that at least 50 people remain unvaccinated.

One of them defends the Golden State colors.

This is Andrew Wiggins, who joined the team in 2020 as a result of an exchange with the Minnesota Timberwolves.

Like Irving, the light forward refused to be vaccinated against the coronavirus, but did not give up hopes of getting permission to participate in the championship.

The first draft of 2014 is reportedly trying to get a religious exemption.

However, according to the San Francisco Chronicle, the final decision will remain with the city's Department of Public Health.

At the same time, the fine for missing each game of the season due to refusal to vaccinate will be more than $ 350 thousand.

It is noted that Wiggins recently visited a doctor who advises people on vaccination issues.

It was assumed that he would be able to relieve the basketball player of fears, but Andrew did not change his position.

It's worth noting that the NBA has been trying to encourage full vaccination of athletes and team coaches for some time now.

For this, personal meetings were held, during which they talked about the positive effects of the vaccine, softened the COVID protocols for the vaccinated.

However, this did not make it possible to ensure that absolutely all representatives of the clubs agreed to the procedure.

And this despite the fact that some of the former and current players of the association continue to suffer from the coronavirus.

So, in March, the head coach of the Dallas Mavericks Rick Carlisle passed a positive test at that time, and in June the Phoenix Suns point guard Chris Paul became infected.

However, a much more difficult disease was suffered by the former participant of the Game of the Stars Cedric Seballos.

In September, he was taken to intensive care in a grave condition and spent 20 days there.

It is worth noting that the coronavirus restrictions will affect NHL players as well.

If Barclays Center and Chase Center do not accept matches with the participation of hockey league teams, then the Madison Square Guard arena is shared by two clubs at once - Rangers and Islanders.

So, the clubs will be able to deprive them of their earnings if the players are forced to miss the match due to the coronavirus, while the vaccinated disease will fall under the category of "injury".

Among other things, the number of athletes without a certificate who will be able to move with the team will be reduced.

According to TSN, 90-95% of players are expected to be vaccinated before the start of the season, however, some still resist the move.

One of these is Detroit Red Wings forward Tyler Bertuzzi.

And although this will not prevent him from taking part in the training camp, it can put an end to his visit to Canada.