One step away from victory: why Trusova withdrew from the free program at the stage of the Russian Cup in Syzran

Alexandra Trusova refused to participate in the free program at the stage of the Russian Figure Skating Cup in Syzran after winning the short program. According to representatives of the FFKKR, the bronze medalist of the World and European Championships made this decision for medical reasons. However, the media report that the athlete was not originally going to perform on the second day of the competition. 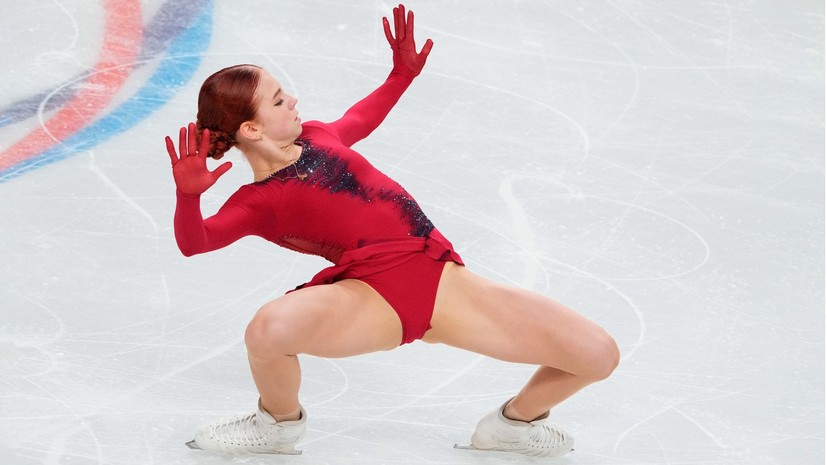 Alexandra Trusova won the short program at the first stage of the Russian Figure Skating Cup in Syzran. As a result of the performance, the 17-year-old athlete scored 74.53 points and bypassed the 2015 world champion Elizaveta Tuktamysheva (70.66), who took second place. However, not everything was perfect at the box office of the "Russian rocket", which again fell from a triple axel. Although this time she was much closer to performing it for the first time at an official competition.

“Yes, unfortunately the triple axel didn’t work again, but it’s nice that modern singles do not hide from the difficulties that arise, but, on the contrary, try to participate in a huge number of all kinds of tournaments. Only a few days have passed since the last start in the USA, and she is back on Russian soil. Probably, this trixel is being developed. Moreover, the under-rotation was not the one for which the points were removed, but much less. Unfortunately, the element did not work out, but the season is just beginning, ”said Olympic champion Alexei Yagudin on Channel One.

After the performance, Trusova suddenly decided to withdraw from the free program, which her fans and experts had been waiting for because of the opportunity to see five quadruple jumps performed by Alexandra. According to the press service of the Russian Figure Skating Federation (FFKKR), the athlete refused to participate "due to health problems." This scenario could not be ruled out, given the rather busy schedule of the bronze medalist of the World and European Championships. The start in Syzran became her third in two weeks after the test skates in Chelyabinsk and the tournament in the American Norwood.

Nevertheless, on the fan club page of the skater on Instagram, it was reported that everything was fine with her, and she simply decided not to apply for the free program.

According to Match TV, the young athlete was really not going to compete on the second day of the tournament from the very beginning, and the goal of participating in the short skating was to work out the triple axel.

1999 World Champion Maria Butyrskaya expressed confidence that the young athlete will soon be able to do a triple axel, given how well she is doing quadruple jumps.

“Probably, this element is simply not one of her favorites.

She wants and wants this so much that she will achieve her goal.

Plus, Trusova is now working a lot before the Olympic Games, so I'm sure she will do it at the right time, "Butyrskaya said.

As for the removal of the 17-year-old skater from the stage in Syzran, then, according to the three-time winner of the European Championship, this question should be asked directly to the coach of the athlete Eteri Tutberidze.

“It is difficult to say why she was filmed ... We do not know the truth, and it is wrong to assume.

Anything can happen, but the assumption is the most terrible.

I don't even know, ”added Butyrskaya.

According to Renat Laishev, General Director of the Sambo-70 Sports and Education Center, on September 24, Trusova will attend an anniversary concert in honor of the 50th anniversary of the school.

The event will take place at the State Kremlin Palace and will be hosted by renowned figure skaters Alina Zagitova and Evgenia Medvedeva.

Consequently, the young athlete will be at the event, while the free program of the Russian Cup stage will be held in Syzran.

At the same time, according to Laishev, the two-time medalist of the national championship will arrive in the Kremlin as a guest and it is not worth waiting for her performance.

“I didn’t even know that Trusova had withdrawn from the free program at the stage of the Russian Cup in Syzran.

I can say absolutely nothing.

Today I was busy with questions about the concert all day, so I didn’t follow the news ”, - quotes Laishev“ Championship ”.

Trusova just five days earlier won the US International Classic in Norwood, where she failed to complete the triple axel in the short program, and in the free program she did only one ultra-si element out of five announced.

At the same time, on September 12, at the test skates of the Russian national team in Chelyabinsk, the young figure skater was the first in history to cleanly perform five quadruple jumps in one program.