The newly promoted to the ADNOC Professional League, Al Orouba, continued its big surprises, as after imposing a draw on Al-Ahly youth and Ajman in the last two rounds, today the league leaders, Al-Ain team, fell into a draw, and overturned their 3-0 delay to a 3-3 draw in the fifth round. , in the biggest surprises role 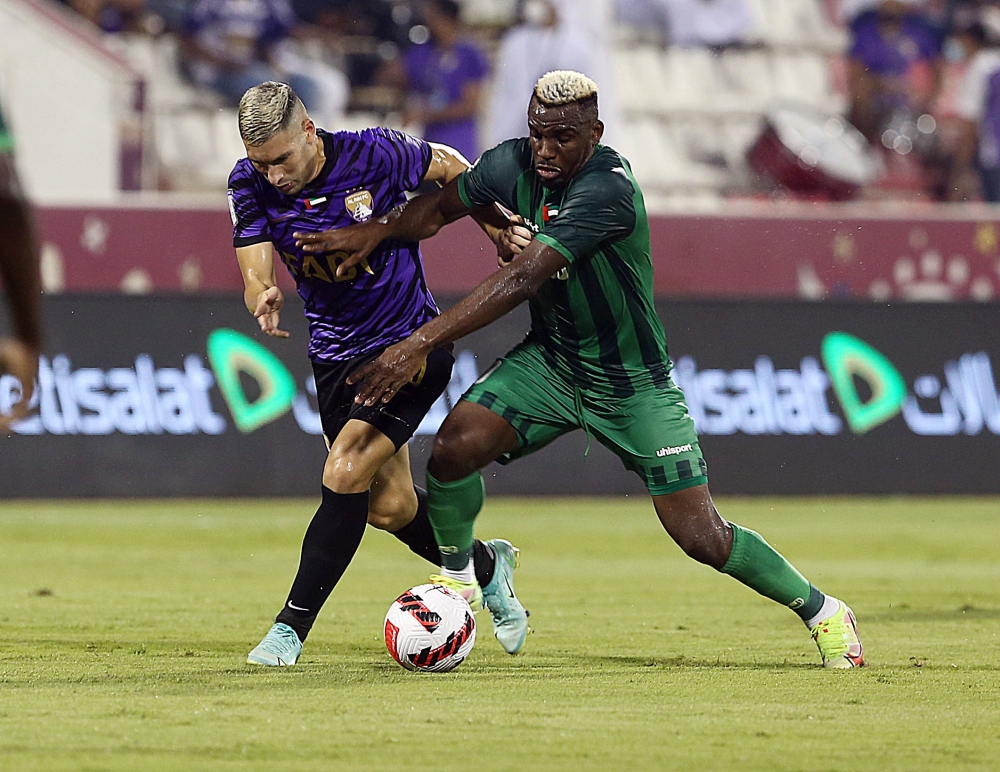 The newly promoted to the ADNOC Professional League, Al Orouba, continued its big surprises, as after imposing a draw on Al-Ahly youth and Ajman in the last two rounds, today the league leaders, Al-Ain team, fell into a draw, and overturned their 3-0 delay to a 3-3 draw in the fifth round. , in the biggest surprises of the league so far, to put the lead of Al-Ain in danger.

The "hat-trick" scored by the Togolese top scorer in the league and Al Ain, Laba Kojo, was not enough for the leader to achieve the full mark, after he scored goals in the first half, "29, 38 and 43", to raise his score to nine goals alone, at the top of the league's top scorer overall, while he scored The goals of Al-Uruba, Ali Madin, "59, 90 + 6", and Saeed Obaid "68".

Although Al Ain dominated the match for most of its periods, the strong return of Arabism in the second half deprived Al Ain of winning, losing two important points in the lead, and raising its score to 13 points.

Al-Ain was the best party in the first half, in which its players dominated the game, amid a clear decline on the part of Al-Uruba, who contented himself with defending.

Under Al-Ain's control, Bandar Al-Ahbabi missed the opportunity to achieve a goal through a charming pass by midfielder Yahya Nader, who was singled out for the goal, and wasted by a very strange "22".

But Laba Kudjo, was able to break the stubbornness of the players of Al-Orouba and scored a beautiful goal after receiving the ball and turning and shooting to the left of the goalkeeper.

And the appetite of the Togolese striker opened, who took advantage of a wrong exit by the Al-Orouba goalkeeper and pounced on the ball with his head, scoring the second goal.

Shortly before the end of the first half, Kodjo scored the third goal from a penalty kick as a result of the recklessness of Al-Orouba defender Saeed Al-Rawahi against Sofiane Rahimi, who successfully executed it inside the net.

The first-half three-way was not enough for Al-Ain to guarantee victory, as the owners of Arabism rose up, and Ali Madin managed to reduce the difference, from a penalty kick obtained by the mistake of defender Eric, and successfully executed it inside the net.

Madani almost shook Al-Ain's net again with a shot that went through the post before settling outside the field.

Substitute Saeed Obaid managed to add a second goal for the benefit of Al-Uruba from a follow-up to the Kingsley cross to easily turn it into the goal in the absence of the defense, before the surprise of Al-Uruba was completed with a equalizing goal, and the second for the player Ali Mudon in the 96th minute, after a shot deceived goalkeeper Khaled Issa and settled on his left.