Palace Bridge, Lakhta Center and Suprematism: the logo of the Champions League final of the season 2021/22 was presented in St. Petersburg

The presentation of the logo of the final of the Champions League of the season 2021/22 took place in St. Petersburg. The creation of the emblem was carried out by the team of the artist Maxim Zhestkov, who looked at the architecture of the city through the prism of Suprematism. The head of the organizing committee Alexei Sorokin noted that the design reflects the cultural heritage of both the cultural capital and the country as a whole. And UEFA representative Tiziano Gayer expressed confidence in the success of the decisive match of the tournament at the Gazprom Arena. 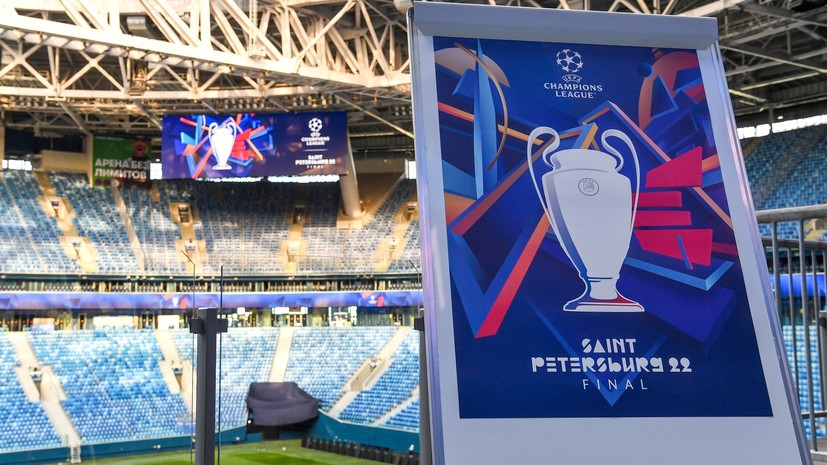 On September 22, the logo of the 2021/22 UEFA Champions League final was unveiled at the Gazprom Arena in St. Petersburg.

It depicts the main trophy of the tournament against the backdrop of the Palace Bridge, the Bronze Horseman, Lakhta Center and St. Isaac's Cathedral.

Also on the emblem you can see the silhouettes of ships, referring to the annual holiday "Scarlet Sails".

The logo was created by Maxim Zhestkov, who, together with his team, decided to look at the city's architecture through the prism of Suprematism and was inspired by the works of artists Wassily Kandinsky and Kazimir Malevich.

It is noteworthy that just a day ago in St. Petersburg they presented the emblem of the 2023 World Cup in hockey, in which the designers were also inspired by Malevich's work.

“Working on the design for the Champions League final was a creative challenge, as it had to embody the revolutionary spirit of St. Petersburg hidden behind the city's classical facades and its modern symbols, together with recognizable centuries-old buildings ... Experimenting with the purest forms gleaned from the city , we managed to create a bright composition, full of anticipation and energy that accompany the decisive match, "- quotes Zhestkov on the official website of UEFA.

The head of the organizing committee of the Champions League-2021/22 final, Alexei Sorokin, emphasized that the design reflects the cultural heritage of the city and Russia as a whole, and the vice-governor of the Northern capital Boris Piotrovsky noted the style of work that meets all St. Petersburg requirements.

The decisive match of the Champions League will take place in St. Petersburg on May 28, 2022.

Initially, it was supposed to pass on the banks of the Neva a year earlier, but was postponed due to the coronavirus pandemic.

Prior to that, in Russia, the final of the main club tournament of the Old World was held only once.

In 2008, English Manchester United and Chelsea met at the Moscow Luzhniki stadium, and the Mankunians won the penalty shootout.

The northern capital will host the European Cup decider for the first time.

UEFA expressed confidence that St. Petersburg and the stadium are almost completely ready for the Champions League final.

As my colleagues said, we have a lot of work ahead of us.

I am sure that the Champions League final in St. Petersburg will be a success, given our experience at Euro.

A wonderful stadium that doesn't need to adapt much to this game ... The match is a one Saturday night event.

But the city will live by it.

About 35 thousand fans of the finalist teams will arrive ... I have no doubt that European fans will have a great interest in the game, "- quotes the director of UEFA club competitions, Tiziano Gayer Sport24.

Alexei Sorokin assured that many events for fans are being prepared for the match in the city, including the festival of champions, which will last four days.

“We are glad to be the organizers of a bright event in St. Petersburg.

UEFA does not remember the cases when, right after the Euro, the city would host the Champions League final ... There will be a solemn banquet for the football family, two places for the gathering of fans and a concert on the eve of the match, "Sorokin said.

The authorities of the cultural capital intend to use the entire city infrastructure for the event.

According to Piotrovsky, Konyushennaya Square and the Peter and Paul Fortress are considered as gathering points for football fans.

“We have eight months of hard work ahead of us.

But the peculiarity of the finale is that it is one evening, in which many events take place ... So far, no restrictions have been discussed.

We are going to hold the match in full format and expect 100% of the capacity in the stands, ”the vice-governor said.

Sorokin, in turn, noted that the fan ID system will most likely be used at the stadium, which will also allow foreign fans to visit Russia without using visas.

“We are conducting a close discussion with all interested departments, but so far without guarantees. As an organizer, I can say that this would make life much easier for us, because before the finals, suddenly a large number of spectators from one or two countries decide to go to St. Petersburg. And everyone should be given the opportunity to make entry as easy as possible. We seriously expect that the fan identification system will be applied, ”concluded Sorokin.