Su Bingtian realized his dream and won the National Games champion! We are waiting for Olympic medals together!

On the evening of September 21, the men's 100-meter track and field final of the 14th National Games was held in Xi'an. Guangdong player Su Bingtian won the championship with a time of 9.95 seconds. Photo by China News Agency reporter Hou Yu   With much anticipation, the Shaanxi National Games men's 100m finals kicked off on the evening of the 21st. "Su Shen" Su Bingtian finally realized his drea 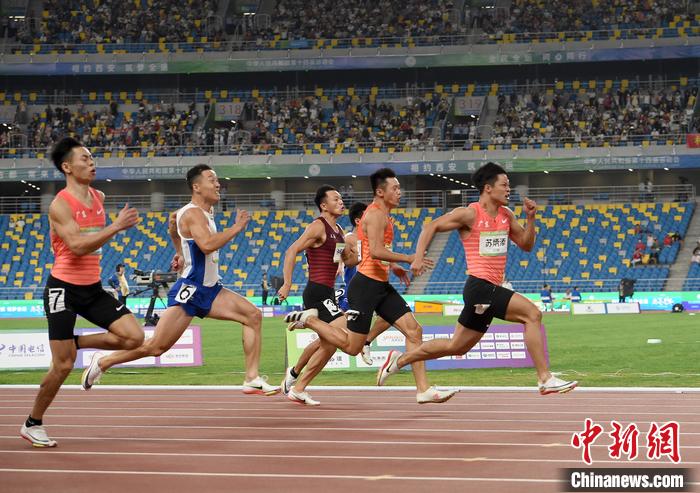 On the evening of September 21, the men's 100-meter track and field final of the 14th National Games was held in Xi'an. Guangdong player Su Bingtian won the championship with a time of 9.95 seconds.

With much anticipation, the Shaanxi National Games men's 100m finals kicked off on the evening of the 21st.

"Su Shen" Su Bingtian finally realized his dream and won the gold medal in the National Games with a time of 9.95 seconds.

In the face of Xie Zhenye, Wu Zhiqiang and other equally strong national teammates, Su Bingtian demonstrated an excellent level of competition in this 100-meter decisive battle and eventually crossed the finish line first.

In the men's 100m preliminaries for the 14th National Games in Xi'an, Guangdong player Su Bingtian (5 tracks) entered the semifinals with a score of 10.23 seconds.

In fact, in the preliminaries of the previous day, Su Bingtian had already shown a good state. He ran 10.23 and 10.06 respectively. Both shots were first in the group and advanced to the final relatively easily.

After the game, Su Bingtian said that he should strive to play his due level in the decisive battle, and strive to get the first National Games gold medal in his career.

As he said, this is the fourth National Games that Su Bingtian participated in.

This time, Su Bingtian wanted to make up for the regret left in the past.

On the night of the full moon in the Mid-Autumn Festival, he finally got what he wanted.

Although the Tokyo Olympics has been over for more than a month, the shock brought by "9.83" has not dissipated.

The enthusiasm of viewers and netizens for Su Bingtian and Chinese track and field has been "burning" all the way from the Olympics to the National Games, which can be seen in the lively atmosphere of the evening online and offline.

The track and field events of the 14th National Games kicked off in Xi'an.

In the men's 100-meter semi-finals of the Tokyo Olympics, Su Bingtian, who was assigned to the "death group", ran an exciting 9.83 seconds. While breaking the Asian record, he overpowered many celebrities as the first in the group. Head up to advance to the final.

This veteran who has just passed his 32nd birthday has written a new history of sprinting in China and even in Asia.

In the subsequent finals, Su Bingtian once again opened the 10-second mark in a short time.

Although he missed the podium in the end, he had already shown the best in the world, and he fought for the title of God.

At the closing ceremony of the Tokyo Olympics, Su Bingtian served as the flag bearer of the Chinese delegation. He said: "This is the pride of Chinese track and field people."

As the host of the Olympic Games and also the main competitor of the Chinese team in the men's 100m event in Asia, Su Bingtian brought a great shock to Japan.

The main torchbearer for the opening ceremony of the National Games was Su Bingtian, Zhang Yufei and other famous sportsmen.

After the final, a Japanese TV station showed a Chinese newspaper with a large photo of Su Bingtian on the program, and covered him in all aspects.

This shows the impact of the achievement of "9.83 seconds" on the world.

Su Bingtian said frankly that he failed to win an Olympic medal in the men's 100-meter event, because he has already played his full level in the competition.

However, in an interview after the game, a joke made by Su Bingtian made many netizens feel distressed, "I especially want to ask her (Gong Lijiao) to take the gold medal and lend me a photo, because I have never seen it before, and there is no Olympic medal. I've seen it."

"I really want to give Su Bing a medal!" This has become the common wish of many netizens.

In the men's 100m final of the Tokyo Olympics, Chinese athlete Su Bingtian finished sixth with a time of 9.98 seconds.

The picture shows Su Bingtian wearing a national flag after the game.

In fact, Su Bingtian was very close to the podium in the Tokyo Olympics.

In the men's 4X100m relay final held on August 6th local time, the Chinese team consisting of Tang Xingqiang, Xie Zhenye, Su Bingtian, and Wu Zhiqiang crossed the finish line for the fourth time in 37.79 seconds, and unfortunately missed the medal with a slight gap of 0.09 seconds. .

The Italian team, the British team and the Canadian team are in the top three.

However, just a week ago, the international testing agency issued an announcement through the official website that the British track and field athlete Jijindu-Ujah’s B bottle urine sample tested positive.

Prior to this, his A bottle urine sample had already had a problem.

In the men's 4X100m relay final of the Tokyo Olympics, the Chinese team consisting of Tang Xingqiang (right), Xie Zhenye (second from right), Su Bingtian (second from left) and Wu Zhiqiang (left) finished fourth with a time of 37.79.

At present, the international testing agency has forwarded the incident to the anti-doping department of the International Court of Arbitration for Sports, and the agency will determine whether Ujah constitutes a doping violation and whether the British team's relay silver medal will be withdrawn.

Once the British team's results are finally deemed invalid, the Chinese team will make up for the bronze medal.

In this way, Su Bingtian will also realize another dream of his career after making up for the regret of the National Games.

Fairness has always been the pursuit of the Olympics, and I believe time will eventually give a fair answer.

It's just that from the past, this process may be very long. But we are willing to wait with "Su Shen" together!