Rolfö: "My best days have not been yet"

After the Olympics, Sweden has climbed from fifth to second place in the world rankings. The strong results have led to higher demands on a national team where more and more people are taking place in big clubs around Europe. This summer, Fridolina Rolfö switched German Wolfsburg to Champions League-winning Barcelona. - When I come to this environment, there are things I can learn and become much better at. My best days have not been yet, says Rolfö to SVT Sport. 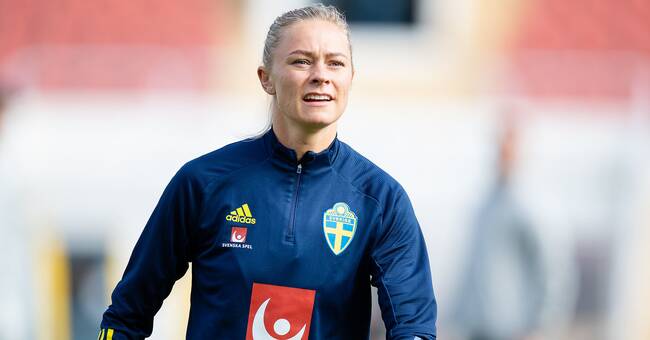 - It has been a great challenge and a completely new adventure for me.

I am completely mushy in the head, because it has been very new to take in.

Fridolina Rolfö was a big reason why Sweden reached the Olympic final this summer and the move to the big club Barcelona puts a completely different light on the 27-year-old.

But what expectations one should have of her, she leaves to others to decide.

"We will take that with us and grow from it"

- You almost have to answer what the expectations will be.

I feel like I'm in a good environment and evolving every day.

I still feel that I am developing very much and feel that I can develop more than I have done so far.

When I come to this environment, there are things I can learn and become much better at.

My best days have not been yet.

When Sweden defeated Slovakia 1-0 in Friday's opening match of the World Cup qualifiers, Fridolina Rolfö was the team's only goal scorer.

Tonight, the team will face Georgia, where Sweden are again big pre-favorites.

Something the Swedish national team has had to get used to after this summer's Olympic successes.

- The expectations have become greater for us.

We should probably be able to get used to the fact that we will be able to have a favorite.

I do not think that should be a negative thing.

We will take that with us and grow from it, we are a really good football team, says Rolfö to SVT Sport.

Do not miss Sweden's match against Georgia at 18.15 on SVT2.