Golf sensation Broberg: "It was close that I quit"

It broke for Kristoffer Broberg who on Sunday won the Dutch Open, his first win in almost six years. - It was damn close that I quit a year or so ago, Broberg says to SVT Sport after the second win on the European Tour in his career. 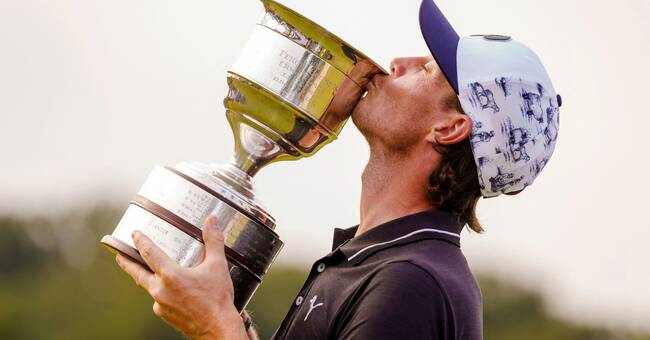 Tears streamed from the 35-year-old's cheeks when the win was over.

After winning the European Tour in Shanghai in November 2015, he has not even been in the top 10 in any competition.

It turned out that the problems began with the initial victory.

- The week after I won in China, it all started with the calf muscle breaking.

Then hell started with injuries on injuries.

With the result in hand, I would have healed the calf injury but I just continued to train but hit my head in the wall and injured myself, says Broberg who underwent three operations during the trip.

- It is probably only Tiger Woods who has done something similar, Broberg thinks, who had to develop an incorrect movement pattern, which only aggravated the situation.

- I was wrong in relation to the ball due to a non-functioning bet.

I am still afraid that it will hurt and have no feeling under my left foot and feel uncomfortable especially from tees with longer clubs where the pain was most before.

Much of it remains in his head, he is afraid that it will pinch the bay it does not do more than maybe once in four weeks, says Broberg about the mental ghost that torments him.

"I went into a depression"

During the six "hell years" he did most things right but did not get any results.

It's just a darkness.

- It feels like you have climbed a mountain but as soon as you get to the top it has been straight down again and I have had to start again.

It was damn close that I quit a few years ago.

I just went down more and more into depression and did not get out of it either.

It was not even fun to train anymore, it was not fun to play.

I felt I had to do something and just went out to the range because I had the bad feelings, just trying to find something, Broberg describes the most difficult period.

He set small goals such as managing a cut and playing well at least two rounds to get ahead on the road.

What made you come back?

- I could accept the situation, all players have some kind of problem.

I wanted it to feel like before all the damage and wrestled with that thought.

It may never do that and I have not been able to accept that, says Broberg who felt helpless.

After course records both Friday and Saturday (64 and 61 strokes) on the beautiful Bernardus course in Cromvoirt, the Netherlands, Broberg led by eight strokes before the end, which was a test.

Turned off the cell phone on Saturday night

- The only thing I could do was to lose the competition because I almost had two hands on the trophy when I went out.

My big challenge was managing myself.

I could have been the guy who led by eight strokes and lost, says Broberg who turned off his mobile phone when it was crammed with messages that "everything is ready" on Saturday night.

It became an unnecessary pressure.

- It is never clear in golf until the putt has gone in, says Broberg who felt like David against Goliath the last lap, even though he went out in such a big lead.

He had a single note for the season in his mobile: "Keep the tour card and win a competition".

- Now I have achieved both and I am incredibly proud of that, says Broberg.