Video- Salah sends an impressive message to Liverpool fans.. Everyone sings about the Egyptian king

Liverpool club, coach Jurgen Klopp and the Premier League sang the historical figures of Egyptian star Mohamed Salah, after scoring the 99th goal with the “Reds” in the English Premier League, while Salah sent a message to the Liverpool fans. 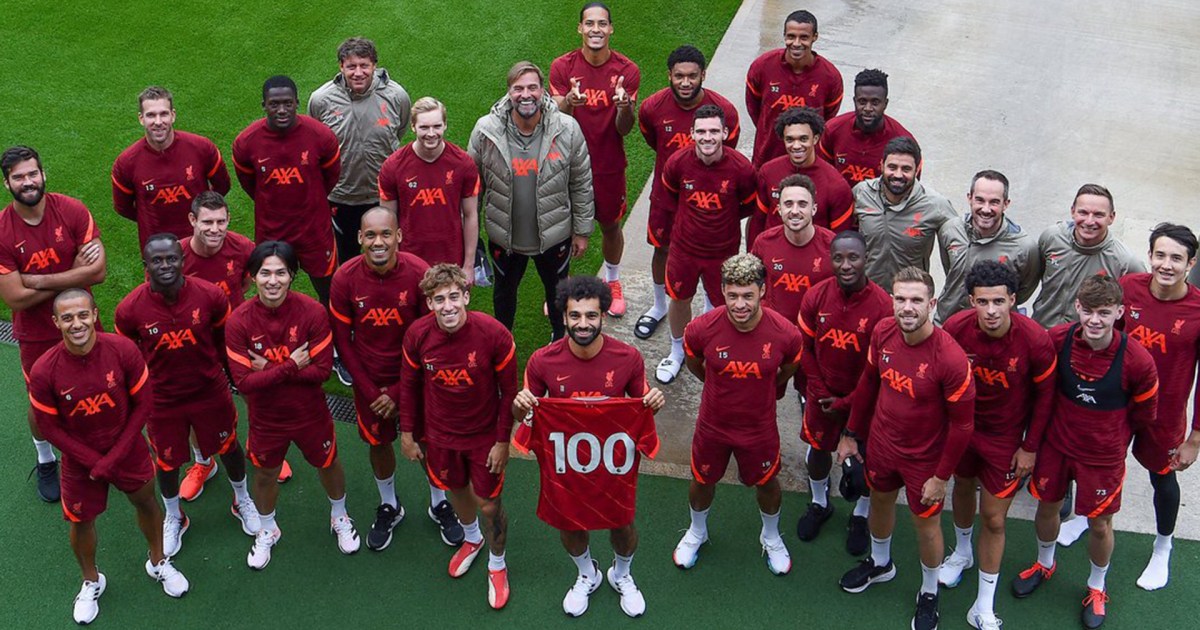 Liverpool club, coach Jurgen Klopp and the English Premier League (Premier League) sang the historical figures of Egyptian star Mohamed Salah, after scoring the 99th goal with the "Reds" in the Premier League, while Salah sent a message to the Liverpool fans.

"We appreciate him so much that you won't believe it," Klopp said of Salah. "I remember the last day of last season, when he missed the Golden Boot by a goal, everyone in our dressing room was so broken for him... for everything he did for us during a very difficult season to stay in the competition." ".

Among the King's 💯 goals in the English Premier League, which one do you prefer?

The German coach added, "We could not congratulate him on his great achievement of scoring 100 goals in the Premier League (in the Liverpool-Chelsea match) because of what happened to Harvey Elliott, but the next day - in training - we all gathered to congratulate him. What a player, what a professional, What a person."

And Liverpool club published - on its official account on Twitter today, Sunday - a video clip of Salah’s goal in the Reds shirt in his match yesterday, Saturday, against Crystal Palace in the fifth round of the Premier League, and he wrote, commenting on the video, “99 goals in the Premier League with the Reds, and the counting continues.” He described Salah as "universal".

Enjoy his best in August, after receiving the Player of the Month award from @StanChart 🔝pic.twitter.com/l4TZeJmDWS

Salah led Liverpool to a 3-0 victory over Crystal Palace at home and among his fans, after scoring a goal and making another, and he also celebrated his goal with the fans in the Anfield stadium.

In turn, the official account of the Premier League - on Twitter - sang the numbers of the Egyptian star, as he said in a tweet he published - yesterday, Saturday - celebrating Salah, "Since his first appearance with Liverpool, he has contributed 134 goals in the English Premier League, more than any other player by at least 24 goals. ", noting that he scored 99 goals and provided 35 assists to his teammates.

Since his @LFC debut, Mohamed Salah has had 134 goal involvements in the #PL, at least 24 more than any other player

Salah was keen to send a special message to Liverpool fans, after his 99th goal in the English Premier League with the Reds shirt.

Salah published - on his personal account on the Instagram site - two pictures of his celebration of the goal he scored in front of the Liverpool fans at Anfield Stadium, in the meeting that ended with the Reds 3-0 victory, and the two pictures received about one and a half million likes from followers.

Salah wrote, commenting on the photo, with moving words directed to the Liverpool fans, in particular, "You, the fans, make me continue like this.. You give me more strength than you think."

A number of Egyptian celebrities interacted with Salah's message, and Liverpool captain - English midfielder - Jordan Henderson interacted with the Egyptian star's post, which was widely spread on social media.