Marcus Ericsson continues to stack in the top 10 in the Indycar series. Sixth place in the penultimate race at Laguna Seca could have been something even better. A miss at the end of the depot loop after the last stop cost time and placement. Colton Herta took his second straight victory on the track before championship leader Alex Palou, Spain and Frenchman Romain Grosjean who finished very strong. 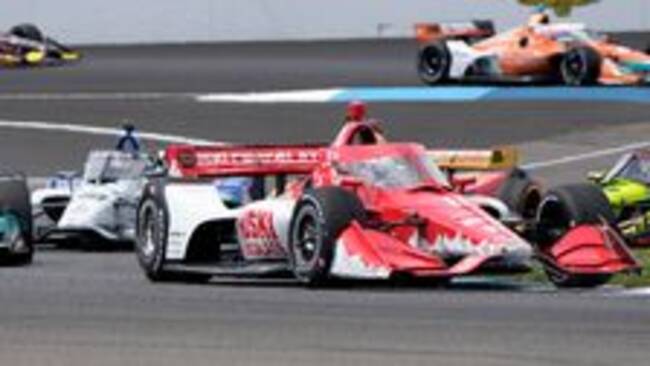 It was a moved Herta who got the big victory hug from dad Bryan in the winner circle Bryan won here in 1998 and 1999.

-Winning at Laguna Seca means so much to me and my family, Herta tells Viaplay.

Ericsson qualified as seventh and looked for a long time to have the car for a top result on the spectacular track outside Monterey, California.

But the 31-year-old from Kumla did not make it to the end of the 95 laps but had to defend his sixth place.

Ahead of the final race in Long Beach next weekend, Marcus is only 15 points from fourth place in the championship where his stablemate, the six-time champion Scott Dixon, is.

The New Zealander became only 13th man in the race.

Ericsson must also look up from behind as the winner Colton Herta is only 28 points behind the Swede.

The city race in Long Beach will also decide who takes home the final victory and the trophy Astor Cup, Palou has a 35 point lead over the Mexican Pato O´Ward, fourth in Sunday's race,

Stablemate Felix Rosenqvist qualified as 15th and got it tough even in the race.

Smålänningen rolled into the finish line as the 19th man, one lap behind Herta.

Marcus Ericsson had to rejoice over an Indycar victory in Nashville last night.