Problems in defense, loss of leaders and a series of failures: why there is no favorite in the upcoming derby CSKA - Spartak

Football "Spartak" and CSKA are approaching the face-to-face match of the eighth round of the RPL in a far from perfect condition. The red and whites suffered an offensive home defeat to Legia in the Europa League this week, and last Sunday the army team barely won a draw in the away confrontation with Tula Arsenal. At the same time, both teams are experiencing serious staffing problems. Several key players will not be able to enter the field in the capital derby for various reasons: Maxim Mukhin, Anton Zabolotny, Roman Zobnin and Alexander Sobolev. In addition, the coaching staff of the red and blue lost options on the flanks of the defense due to injuries to Mario Fernandez and Georgy Shchennikov. 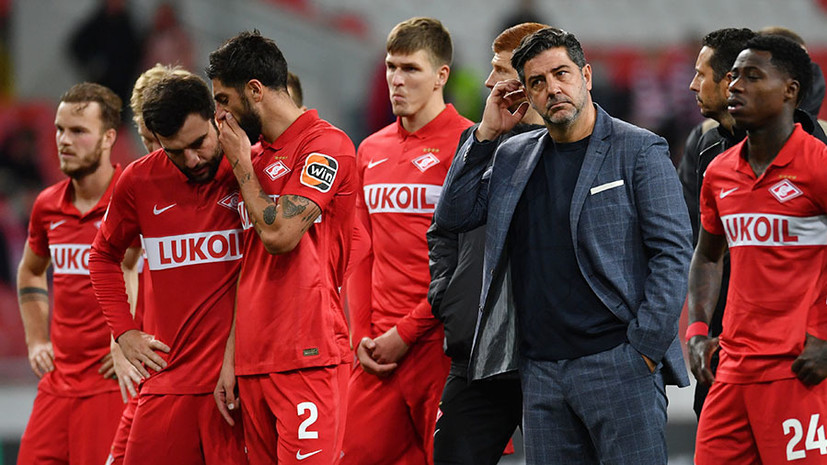 As a rule, Russian fans with bated breath are waiting for the main Moscow derby.

Football fans argue with interest which team will be stronger and which player will prove themselves brighter.

However, this time both CSKA and Spartak are approaching the face-to-face confrontation with such a heap of problems that it is more correct to put the question differently: which of them will be weaker?

By the eighth round of the RPL, both teams scored only ten points and are located in the middle of the standings.

Last weekend, the Red and Blues lost points in a confrontation with one of the outsiders of the tournament - Tula's Arsenal, and the ten-time champions of Russia this week suffered an offensive defeat by Legia in the Europa League.

This misfire can further unnerve the players, because after it, the future of Rui Vitoria at the club turned out to be a big question.

It is possible that the derby will be decisive for the Portuguese, and the defeat will turn into a dismissal.

But his counterpart Alexei Berezutsky is not in the best situation either.

The metropolitan collective under his leadership is still in a fever.

In addition, the mentor was left with little or no gain in the transfer market.

In the summer, CSKA limited itself to the purchase of Maxim Mukhin and the return of Anton Zabolotny.

In such a position, when both specialists were actually backed up against the wall, it will be extremely curious to see how they will show themselves in a face-to-face match, whether they can surprise each other and what unexpected moves they will take.

It is curious that they seemed to have begun to prepare in advance for a key meeting.

Vitoria first tried to instill a formation with two central defenders in his new wards, but after a series of setbacks he returned to the 3-4-1-2 scheme tested last season, which, in a meeting with Legia, transformed into 3-4-3 with wingers Ayrton and Viktor Moses.

But Berezutsky also played the last two games in a similar arrangement.

You can understand this decision, because on the eve of the game against Spartak, he was left without two main full-backs - Georgy Shchennikov and Mario Fernandez.

And if the fans are already accustomed to the absence of the first, the loss of the second became a serious headache.

Unsurprisingly, the coach tried to strengthen the defense at least quantitatively. But if in the game against Zenit it helped, then in the match against Arsenal it did not. Viktor Vasin, who came out in the top three with Yaka Biyol and Igor Diveev, was involved in both conceded goals. The big question is - is it worth the risk in the derby, or is it better to trust a more or less proven duo?

CSKA has enough problems in other lines as well. Chief among them is the absence of Maxim Mukhin. The midfielder acquired from Lokomotiv in the summer is almost the only one in the team who is capable of efficiently acting in destruction. It is no coincidence that in the current RPL draw, he invariably appeared at the start. Statistical indicators also speak of the importance of the young performer: he is in third place in the team in terms of the number of interceptions on average per fight (1.3) and in second - in terms of the number of fouls (1.1). Bijol could have replaced him, but the Slovene is plugging a hole in the center of defense. Ivan Oblyakov also has experience in this position, but he helps on the left. Only Kristian Bistrovich and Emil Bohinen remain, who are not even close to being "watchdogs" in the good sense of the word.

In addition, Anton Zabolotny was damaged in the confrontation with Arsenal. According to the latest media reports, he is unlikely to have time to recover to the derby. If at the beginning of the season Berezutsky tried to use two attackers at once, then he made a bet on a textured newcomer. This somewhat simplified the football of the army, because with the striker who was excellently leading the fight on the second floor, there was a great temptation to switch to crosses and diagonals from the flanks. In the match with Zenit alone, Zabolotny won six riding duels. However, in the derby, Fedor Chalov will be at the forefront of the attack with a high degree of probability on an uncontested basis, having equalized the score in Tula.

In the match against Legia, Roman Zobnin was injured, and Alexander Sobolev received his fourth yellow card in the RPL against Khimki.

At first glance, the striker's disqualification should not strike a blow at the red and white, because this season he does not always get a place at the base.

However, without a powerful forward, the team will lose the ability to push through the tall Diveeva and Biyol, and will also lose "Plan B" in the attack, just like CSKA in the case of Zabolotny.

After all, even if the Russian did not get into the starting lineup, he could enter the field during the meeting and create serious problems for tired opponents.

On the other hand, both teams will have to act more low in the opponent's half and look for gaps in each other's defense.

Considering the lack of coordination of the three central defenders of the army men and the ingenuity, coupled with the speed of Ezequiel Ponce, Jordan Larsson and Quincy Promes, problems may arise from the owners.

However, the same applies to Chidera Ejuke, who is able to single-handedly determine the outcome of any episode and leave several rivals at once.

However, the fate of the derby may be decided on the flanks, since both teams do not look ideal in these zones.

In red and blue, this is largely due to injury.

Both Shchennikov and Fernandez will not be able to enter the field.

In the match with Arsenal, they were replaced by universal but nominal midfielders Oblyakov (left) and Konstantin Kuchaev (right).

The game of the latter, apparently, did not suit Berezutsky, and during the break he was replaced by Kirill Nababkin. It can be assumed that the experienced performer will have a chance in the derby as well. But it will not be easy for an older footballer to cope with the fast and technical Ayrton and Promes, and therefore regular insurance from Biyol is necessary. On the left, Oblyakov's positions look less vulnerable, especially given the presence of a confident and fast Diveev nearby.

However, "Spartak" on the edges also does not look very reliable.

Ayrton's main drawback is a consequence of his merits.

The Brazilian is overly addicted to attack and does not always have time to return to his half, although Georgy Jikia helps him.

Victor Moses is also more creation-oriented in a three-center-back setup.

And Nikolai Rasskazov, unlike the captain, does not always have time to work for two.

So, the missed ball in the duel with Legia came precisely through his zone, when the tired footballer did not have time to interrupt the opponent's jerk.

But it will be more difficult for the teams to attack through the center, since both teams, for various reasons, have lost a number of players who are responsible for creativity and the advancement of the ball (Nikola Vlašić, Zobnin, Alex Kral).

Especially painful for CSKA was the departure of the Croat to West Ham, because it was through him that the whole game of the army went on in recent years.

Now the experienced Alan Dzagoev, who is second only to Oblyakov in terms of key passes (2.7), is primarily responsible for the non-standard moves.

This parameter refers to the last pass that creates a goal-scoring opportunity for partners, but does not end with a goal.

Great hopes in the middle of the field will be associated with Ilzat Akhmetov.

He is not only able to act unpredictably due to excellent technique, but also competently starts the team's attacks, skillfully getting out of pressure.

At Spartak, Nail Umyarov and Jorrit Hendrix are likely to be in the support zone.

So, the midfielder of the Russian youth team takes seventh place in the red-and-white team in the RPL in terms of the average number of passes (39.2) with a high percentage of accuracy of 80.6%, and from the midfielders he is second only to Zobnin.

But it is still difficult to draw conclusions on the Dutchman's game, since, as a rule, he comes out only as a substitute.

In any case, it will be difficult to wait for tricky moves from them, and the line of attack runs the risk of remaining on a "starvation diet".