"Told half of the team that Malinovsky does not fit the scheme": what is known about the scandal in the Ukrainian national football team

The acting head coach of the Ukrainian national football team, Alexander Petrakov, in a personal conversation with the players, said that Ruslan Malinovsky did not fit his game scheme. The Atalanta midfielder himself spoke about this in social networks. Partner of Alexei Miranchuk at the club also explained the decision to leave the location of the national team ahead of schedule before the friendly match with the Czech Republic and admitted that the mentor's public apology put him in an awkward situation. 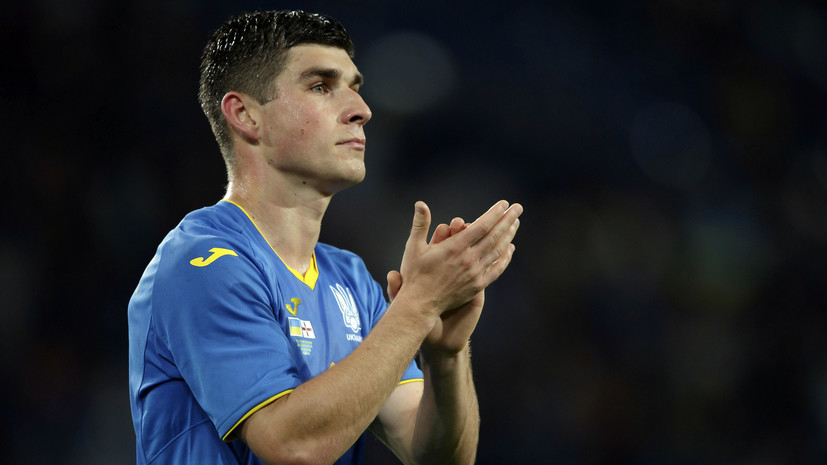 The scandal continues to flare up in the Ukrainian national football team, in which one of the leaders of the team Ruslan Malinovsky and the acting head coach Alexander Petrakov were involved. The day before, the Atalanta midfielder published a message on social networks in which he made a complaint against Andriy Shevchenko's replacement and explained why he asked to be released to the club's location on the eve of the test match with the Czech Republic.

“Recently, there have been many comments about my attitude to the Ukrainian national team, and I have to react. It is a great honor for me to be part of the team of my country, and I always come to the national team with great desire. The number of minutes and my position on the field is determined by the coaching staff, and as a professional I respect this and always accept it. Out of respect for the fans and partners, I did not give any comments after the last training camp, so as not to harm the team and not interfere with the new coach ... All the more, it was surprising for me that questions were brought up for general discussion, which, in my opinion, are resolved internally teams. I cannot have any grudges against the coach for his choice of line-up or tactics, "Malinovsky wrote on Instagram.

Now the 28-year-old player is considered one of the strongest footballers from the post-Soviet space. Last season, the Ukrainian strengthened his status as one of the leaders of Atalanta, only in Serie A having chalked up 8 goals and 12 assists. He was also included in the national team's application for Euro 2020. True, an injury prevented the midfielder from showing himself at the continental championship, which seriously limited his playing time. Even so, he remained the most expensive player in the former USSR according to Transfermarkt. It is estimated at € 30 million, ahead of Alexander Golovin and Alexander Zinchenko (both at € 28 million), Viktor Tsygankov (€ 25 million), Khvich Kvaratskheliy (€ 18 million), Roman Yaremchuk (€ 17.5 million) , Vitaly Mykolenko (€ 17 million), Henrikh Mkhitaryan (€ 15 million) and others.

This season, Malinovsky has not yet demonstrated the performance that helped him become the star of the Italian championship, but firstly, only three rounds have been played in Serie A, and secondly, he still looks more than decent. In key assists, he tied for third in the league, and tenth in the number of actions that led to shots on goal. Therefore, it is not surprising that many fans expected to see him in the national team's starting lineup in September's 2022 World Cup qualifiers. However, he started his meetings with Kazakhstan and France on the bench, and in the second match he got only eight minutes of playing time at his disposal.

“During the last training camp, the head coach told half of the team in individual conversations with the players that Malinovsky did not fit his scheme.

Naturally, this information reached me.

I can understand his position, but I do not understand why this should be discussed with the players, but not with me.

Like any ambitious footballer, I want to play as much as possible and, of course, get upset if this does not happen, but it would be unprofessional for me to take offense at the coach who is responsible for the result.

Therefore, when asked if I was offended, he replied: “No, you are in charge, you decide,” Malinovsky explained.

At the end of the meeting with Kazakhstan, the acting coach of the Ukrainian national team admitted that he personally apologized to Malinovsky for the decision to leave him in reserve.

According to Petrakov, the midfielder was very dissatisfied with the state of affairs.

“I get to know the team, we play according to a new scheme.

We talked with Ruslan when he arrived at the national team.

He is offended that I did not put him in the lineup.

I talked to him, I asked him for forgiveness.

I just came to the team.

In this scheme I need players who have flanking speed, ”Tribuna quotes Petrakov.

The midfielder himself said that he did not ask for an apology, and the mentor's actions only put him in an awkward situation.

But she became even more curious after Malinovsky left the location of the national team on the eve of a friendly match with the Czech Republic.

“In sparring with the Czech Republic, I wanted to make a rotation in advance. After the match with France, Shakhtar players came up to me. We had a preliminary conversation to let them go, because they were very tired. Without thinking twice, I immediately called Dynamo players. I say that we have a single team, in which case Sidorchuk, Zabarny and Tsygankov also leave ... Malinovsky also came up and said that he also wanted to leave. The administrator said that we bought him a ticket for September 9, another match in the Czech Republic. And he said he didn’t want to stay ... He didn’t explain it in any way. I asked the administrator to take him a ticket. If a person wants to go, then let him go, ”Petrakov said on the air of the Big Football program.

Malinovsky himself described this situation a little differently.

He confirmed that he had indeed discussed with the mentor an early departure from the location of the Ukrainian national team, but stressed that this decision was sanctioned.

“After being informed that a large group of players were returning to their clubs, I asked if I could leave.

To which he received the answer: "If you want, go."

It was not a demarche, I asked for permission and thanked the coach for allowing me.

I really hope that the discussion of this topic will end soon, and all football issues will be resolved exclusively within the team, ”concluded Malinovsky.

Petrakov replaced Shevchenko as head coach at the end of the European Championship, where the Ukrainian national team reached the quarterfinals for the first time in its history.

Nevertheless, the country's Football Federation did not renew the contract with a specialist and relied on the former youth coach.

It was under his leadership that the yellow-blues won the 2019 world championship.

This decision initially seemed strange and over time it began to raise more and more questions.

So, after the match with Kazakhstan (2: 2), the right lateral Alexander Karavaev became the object of harsh criticism from the mentor.

“I talked to him normally, calmed him down.

But you will excuse me, in 29 years to make such mistakes.

I talked with Sasha.

I tell him, show me how to properly hold the player.

He showed me, and I say what is wrong.

You have no right to keep it that way.

You have to keep the player in front of you at arm's length, and he shows me on one line.

You will never be able to do this.

They'll give him a pass, and you won't have time while you turn around.

The guys are slowly accepting my teachings, ”Petrakov said.

The representatives of the attacking line also got it.

True, in this case, the specialist did not name specific names, but expressed dissatisfaction with their performance.

“I can't go out and score instead of them.

They go one-on-one and cannot realize it, ”Petrakov lamented.

It is worth noting that in Ukraine, far from everyone supported the coach, both in the case of Malinovsky and with public criticism of the charges.

As reported in the media, the president of Dynamo Kiev, Igor Surkis, was outraged by Petrakov's statements about Karavaev, and the famous coach Jozsef Szabo expressed the opinion that an attempt to teach such an experienced athlete to play looks ridiculous.

“You can just tell him that he acted incorrectly.

The footballer may answer that he played too much or something else.

Naturally, he should see the opponent when the attack comes from the opposite flank, ”Szabo said.

In turn, the honored coach of the Ukrainian SSR, Miron Markevich, believes that the specialist and the midfielder will soon come to a consensus.

So far, the national team of Ukraine with five points is in second place in its qualifying group in the qualification for the 2022 World Cup, only ahead of Finland in terms of additional indicators.

And this despite the fact that Markku Kanerva's charges played one match less.

“I think that Petrakov and Malinovsky should also find a common language.

I just want to warn them: there is no more time for buildup.

After all, the decisive matches for a ticket to the World Cup are just around the corner.

And Malinovsky is needed by the Ukrainian national team ”, - Meta-Ratings quotes Markevich.