How long will Su Bingtian have to wait to get an Olympic medal?

On the evening of September 14th, Beijing time, the international testing agency issued an announcement on its official website that the British track and field athlete Gijindu-Ujah’s B bottle urine sample tested positive.   Earlier, the international testing agency had announced that the Uja A bottle urine test result was positive. The relevant samples were collected after the Tokyo Olympic Ga 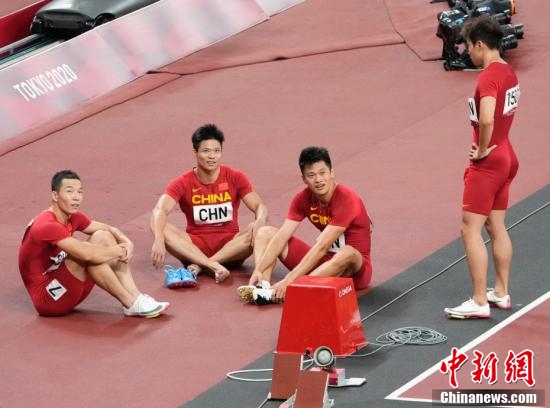 On the evening of September 14th, Beijing time, the international testing agency issued an announcement on its official website that the British track and field athlete Gijindu-Ujah’s B bottle urine sample tested positive.

Earlier, the international testing agency had announced that the Uja A bottle urine test result was positive.

The relevant samples were collected after the Tokyo Olympic Games Men's 4x100m Relay Final, in which the British team won the silver medal.

Later, Ujah applied for a B bottle test, and now the result is still positive, which means that Ujah’s doping test samples are determined to contain prohibited ingredients.

At present, the international testing agency has forwarded the incident to the anti-doping department of the International Court of Arbitration for Sports, and the latter will determine whether Ujah constitutes a doping violation and whether the British team will be cancelled the silver medal in the men's 4x100m relay of the Tokyo Olympics.

Once the silver medal of the British team is cancelled, the Chinese team consisting of Tang Xingqiang, Xie Zhenye, Su Bingtian, and Wu Zhiqiang will receive the bronze medal.

Bringing memories back to the New National Arena in Tokyo on the evening of August 6, the men's 4x100m relay final proceeded as scheduled, and the Chinese team played on the 7th track.

In the preliminaries, the Chinese relay team composed of Tang Xingqiang, Xie Zhenye, Su Bingtian, and Wu Zhiqiang ran an outstanding score of 37.92 seconds, ranking first in the group.

Starting, handing over, accelerating, sprinting, 37 seconds 79 seconds, the Chinese team improved by 0.13 seconds on the basis of the preliminary results.

Although they passed the medal with a gap of 0.09 seconds, the combined efforts of the four also tied the Chinese team's best Olympic record in the event.

After the game, the four players panted heavily on the sidelines, and they had exhausted all they had.

"There are still some problems with the transfer of the baton in the game. If you handle it better, the medals will be fine."

Facing the camera, Su Bingtian's words contained the bitterness of being unwilling and a veteran.

Data map: On August 8, the closing ceremony of the Tokyo Olympics was held at the New National Stadium in Tokyo, Japan.

The picture shows the flag bearer of the Chinese delegation, Su Bingtian, holding the national flag at the closing ceremony.

At the closing ceremony of the Tokyo Olympics, Su Bingtian served as the flag-bearer of the Chinese delegation. He bluntly said that this is the pride of Chinese track and field people.

From the associate professor of Jinan University to the flag bearer of the delegation, from the Asian record holder to the "first man" in China's 100 meters, Su Bingtian, a veteran who has already passed his life, seems to lack an Olympic medal.

This time, it is expected to win the bronze medal by hand, and netizens' wish of "I really want to add a medal to Su Bing" may be realized.

But how long will it take to wait for the final step of getting a medal and touching the dream with both hands?

The previous medal replenishment incidents on Gong Lijiao may be used as a reference.

But after the closing ceremony, the International Olympic Committee announced that the women's shot put champion, Belarusian Ostapuchuk was deprived of the gold medal because of a positive doping test, and Gong Lijiao received the bronze medal.

On December 7th of the same year, Gong Lijiao hung the "late" bronze medal on his neck.

It took less than 4 months from the "East Window Incident" of the opponent's doping violation to Gong Lijiao receiving the replacement medal.

In the past 4 years after the London Olympics, the International Olympic Committee announced again that the Russian female shot put athlete Claudeko had a positive urine test. The silver medal she won at the 2012 London Olympics was withdrawn and Gong Lijiao was promoted to the next level. Make up to get the silver medal.

On the evening of August 1, local time, Chinese player Gong Lijiao showed off the gold medal on the podium.

In addition, there is a more dramatic scene.

At the 2008 Beijing Olympics, the 19-year-old Gong Lijiao ranked fifth in the women's shot put with a score of 19 meters 20.

And many years later, the International Olympic Committee announced that the runner-up and third runner-up of the women's shot put event of the Beijing Olympic Games were positive in the re-examination of the drug test samples, and both medals were deprived. At that time, Gong Lijiao, ranked 5th, won the bronze medal.

11 years after the end of the Beijing Olympics, she really won this hard-won medal.

Some people are worried about whether Su Bingtian might have to wait for many years to get the medal. In fact, this is a bit worrying.

The runners-up and third runners-up of the women's shot put event at the Beijing Olympics were not found to have violated the doping regulations that year, but were found to be violated in the 2016 and 2017 re-examinations respectively.

In other words, Gong Lijiao's time to wait for a replacement medal is about 2 to 3 years.

In addition to track and field events, there are other examples for reference.

In November 2016, the official website of the International Wrestling Federation confirmed that Azerbaijan’s Rashimov, runner-up in the 60 kg class at the 2008 Beijing Olympics, was disqualified due to doping and Chinese player Sheng Jiang was replaced. bronze medal.

In August 2017, Sheng Jiang, who had retired as a coach, officially took over the Olympic medal in Hangzhou.

It can be seen that

Sheng Jiang waited less than a year from the determination of Rahimov's violation of the results to the final replenishment of the medal.

Based on past experience, if it is determined that Ujah constitutes a doping violation and needs to be punished by cancellation of the results, it may only take a few months from the announcement of the Chinese relay team’s replacement of the medal to Su Bingtian and others getting their own Olympic bronze medal. It may also take several years.

However, the anti-doping department of the International Court of Arbitration for Sports has not yet made a final ruling, and there are still variables in everything.

The Chinese team's replacement medals were not "in their pockets", and the audience should also deal with this matter normally. Regardless of whether the medals were replaced or not, their performance in Tokyo was already outstanding enough.

For veteran Su Bingtian, who has just passed his 32nd birthday, this may be his closest to an Olympic medal.

In 2018, Su Bingtian, who was already honored, ushered in another peak of his career.

That year, he broke the men's 100 meters 10 seconds mark three times in a row, and the title of "Su Shen" was well-known in the arena.

Data map: On August 5, in the men's 4x100m relay preliminaries of the Tokyo Olympics, the Chinese team composed of Wu Zhiqiang, Xie Zhenye, Su Bingtian and Tang Xingqiang ran 37.92 seconds and advanced to the final with the group first.

However, the sudden injury to his waist during training caused him to break the Doha World Championships. In his own words, it was "like riding a roller coaster."

The delay of the Tokyo Olympics forced the veteran to compete with more young athletes on the track.

In order to better prepare for the battle, during the closed training period, Su Bingtian always went to the infirmary after dinner to receive massage conditioning to relieve the pressure on the body caused by high-intensity training.

Data map: On August 1, local time, in the men's 100-meter semifinal of the Tokyo Olympics, Chinese flying man Su Bingtian set an Asian record with 9.83 seconds and successfully advanced to the final.

This time it is hoped that the medal will be refilled. It is not so lucky, it is better to describe it as "God rewards hard work".

If the Chinese team finally hands over the medal, Su Bingtian will no longer be the "Chinese flying man" who talked and laughed and said, "I haven't even seen an Olympic medal."

Time is our good friend, let us look forward to the success of Su Bingtian's hard work.