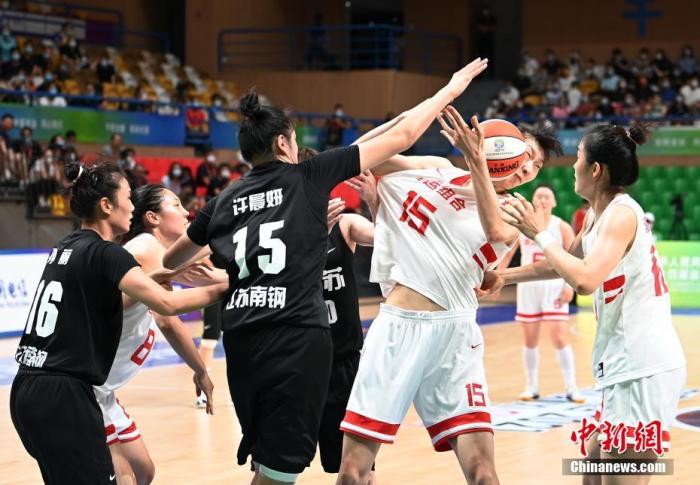 In the aftermath of the Tokyo Olympics, this first National Games held in the central and western regions of China showed a higher degree of enthusiasm and more highlights.

——Watch the Tokyo Olympic champions all fight again and relive the Olympic atmosphere.

Today, the 50 Tokyo Olympic champions who have just taken off their Olympic jerseys are all fighting again. What kind of results and performance they will bring has become the biggest attraction of this National Games.

At present, the Olympic team has won gold medals in more than 10 events including synchronized swimming and the women's basketball team.

After the official opening of the National Games, these powerful joint teams will show China's highest level in men's track and field 4×100m relay, women's football, table tennis mixed doubles and other events, while taking the audience to relive the Olympic atmosphere.

On the evening of September 14, the adult five-a-side basketball final of the 14th National Games was held in Xi'an. The Olympic team (white clothes) defeated the Jiangsu team with a big score of 100:52 to win the championship.

The picture shows the fierce competition between players from both sides.

——Look at "the strongest event on the surface": table tennis and weightlifting reproduce the "fairy fight".

For the three "dream teams" of China diving, table tennis, and weightlifting, "the world champion is easy to get, and the National Games gold medal is hard to find" is not an exaggeration.

The competition of these three events at the National Games has always been said to be "the strongest event on the surface".

The diving competition, which ended early on the 14th, has become a hot topic in major online media several times because of the intensity of competition that surpassed the Olympic Games.

After the official opening of the National Games, the table tennis and weightlifting competitions will undoubtedly reproduce the scene of "fairies fighting".

In the Chinese table tennis team where world champions are gathered, only Malone has won the singles gold medal in the National Games.

World Grand Slam winners such as Liu Guoliang, Kong Linghui, Zhang Jike, who have won the international table tennis world, all missed the Grand Slam because they had not won the National Games singles championship.

Therefore, who will become the king of the national ball is also one of the biggest suspense and highlights of the recent National Games.

Data map: On the evening of August 6, Beijing time, in the finals of the men's table tennis team at the Tokyo Olympics, the Chinese team composed of Ma Long, Fan Zhendong and Xu Xin defeated the German team 3-0 to win the championship.

This is the 35th gold of the Chinese delegation in this Olympics and the fourth gold that Guoping won in the Tokyo Olympics.

Due to restrictions on the number of participants, the Chinese weightlifting team sent 4 men and women to participate in the Tokyo Olympics, winning 7 gold and 1 silver.

The 14th National Games of the current National Games will enumerate the battle for heavy gold medals, which will gather the best men and women in China.

In the strong dialogue, how many Asian and world records will be set (exceeded) is of particular concern.

In addition, in gymnastics, shooting, badminton and other traditional Chinese advantageous events, the level and intensity of competition in some small events are also not inferior to world competitions such as the Olympics.

At present, although the badminton and shooting events of the National Games have started ahead of schedule, after the opening ceremony, badminton will produce 5 Olympic gold medals, and shooting will determine 6 including the Tokyo Olympic first gold (women’s 10m air rifle). Project champions.

——Look at the three big balls in swimming track and field.

As the foundation of competitive sports, swimming and track and field have always been the most concerned events in comprehensive sports games.

In the current National Games, the swimming and track fields, which produced 37 and 52 gold medals respectively, are also not lacking in attractions.

Zhang Yufei, who won 2 golds and 2 silvers at the Tokyo Olympics, will participate in six small events this time. Can Tokyo "Feiyu" be crowned the gold king of the National Games?

Data map: On July 30, Wang Shun celebrated his victory after the men's 200m individual medley final in the Tokyo Olympics.

Can Gong Lijiao and Liu Shiying continue to be kings in the National Games?

After Tokyo accidentally missed the gold medal, can the Chinese men's and women's race walking "day group" make up for their regrets with good results at the National Games?

In the place where these two major competitive sports are "fortresses", how many achievements will be made in the forefront of the world?

In the past 37 years, the Chinese men’s three major ball missed the Olympic Games for the first time, which has become a regret for many fans.

Today, the National Games once again provides an opportunity to watch and judge China's three major balls up close.

Under the influence of the epidemic and the sharp decline in matches, it is undoubtedly a gluttonous feast for the fans.

——Look at the old man and the newcomer to stand out.

Like the previous National Games, in addition to the Tokyo Olympic champions, there are also a number of star players that deserve attention.

A large number of outstanding athletes missed the Olympic venue due to restrictions on the number of entries or some unexpected factors.

In addition, the current National Games will usher in a group of comeback veterans.

For example, Gong Jinjie, who partnered with Angel Bell at the Rio Olympics and won the first Olympic gold medal for a Chinese bicycle, Guo Wenjun, the host star and Beijing and London Olympic double shooting champion, and Lu Ying, the former Chinese "Queen of Butterfly", the veteran of the Five Dynasties National Games , Two-time high jump champion Zheng Xingjuan and so on. They have all left bright moments in China and even the world sports arena. Now they are reappearing on the field because of their love for sports and a kind of inheritance.

Looking at the resumes of Chinese sports stars, many of the famous works are labeled "National Games".

In this National Games, which newcomers will stand out and who will become the brightest new stars are worth looking forward to.

At the closing of the Tokyo Olympics, the relevant person in charge of the Chinese delegation once stated that after the 14th National Games, China will start the selection and formation of teams for the new Olympic cycle.

Therefore, the current National Games is not only a summary of Chinese sports in the Tokyo Olympic cycle, but also the beginning of the Paris cycle.

The National Games has always been the most comprehensive review of Chinese sports.

At this connecting point, paying attention to the National Games will help to have a more comprehensive and in-depth understanding of Chinese sports.