The National Games is about to kick off, these 7 highlights are definitely not to be missed! 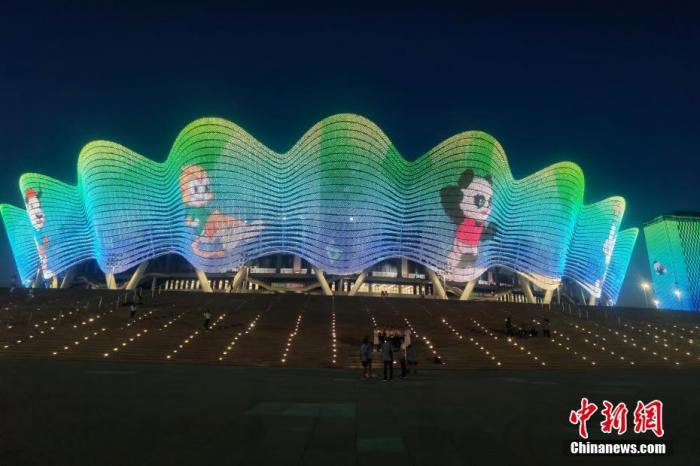 On September 13, the Xi'an Olympic Sports Center venue lights up to start the "National Games Moment".

The 14th National Games of the People's Republic of China will open in Xi'an on September 15.

On the evening of September 15, the 14th National Games officially kicked off. The opening ceremony will be held at the Olympic Sports Center in Xi’an, the ancient capital of the millennium.

On the occasion of summer and autumn, another sports feast meets people.

In this National Games, what are the highlights inside and outside the stadium?

Data map: The youngest Olympic champion of the Chinese delegation was born. Quan Hongchan won the gold medal in the 10m platform at the Tokyo Olympics with a total score of 95 points. The coach lifted her high after the game.

With Quan Hongchan’s last two jumps performing the "Splash Disappearing Technique" in succession, she reversed and defeated Chen Yuxi in the women’s 10-meter platform final of the National Games and won the championship for the Guangdong team; a joint one composed of Yang Qian and Yang Haoran The team won the gold medal in the 10-meter air rifle mixed team competition...

At the National Games, the athletes who returned from the Tokyo Olympics still maintained a very high level of competition.

As Guoping, Su Bingtian and others arrive in the National Games Village one after another, there will be more Olympic athletes showing their talents.

This is the ninth gold medal of the Chinese sports delegation in this Olympic Games. Yang Qian has become the first post-00 Olympic double gold medalist in China's sports arena.

Aspect 2: Young teenagers are eager to prove themselves

Compared with the Olympic venues, the intensity of competition in certain events at the National Games does not lag behind.

Many young teenagers are also eager to let the outside world remember their names at the National Games.

In the next ten days, there are likely to be young teenagers who will shine.

On September 13, the Xi'an Olympic Sports Center venue lights up to start the "National Games Moment".

The 14th National Games of the People's Republic of China will open in Xi'an on September 15.

Aspect 3: Opening ceremony performance is worth looking forward to

As the official appearance of a comprehensive event, the importance of the opening ceremony is self-evident.

The opening ceremony of the National Games is a creative plan centered on the theme of "a century of the party's founding, a grand sports event".

The chief director of the opening ceremony will be Jiang Haoyang and Jiang Gang, and the team's main creative staff will come from the core creative team of the opening (closing) ceremonies of the Beijing Olympic Games and the Guangzhou Asian Games.

When night fell, the Xi'an Olympic Sports Center was lit up, and the "one venue and two halls" under the background of the lights could be like a galaxy.

How will Shaanxi elements be presented in theatrical performances, and what special identities will the famous generals appear in?

On the evening of the 15th, the suspense is about to be revealed.

Image source: Official Weibo of the Organizing Committee of the Fourteenth National Games.

Aspect 4: The mascot fully displays the characteristics of Shaanxi

The crested ibis, giant panda, takin, and golden monkey are known as the "Four Treasures of the Qinling Mountains", and the mascot scheme for this National Games is also designed with these four national treasure animals as creative prototypes.

The combination of mascots dressed in sportswear of "Wealthy Yellow", "Holy Land Red", "Dream Blue" and "Ecological Green" respectively implies running to the new era, welcoming all customers, sharing a new life, and building a Chinese dream together.

After the award ceremony, Zhang Jiaqi, who likes to collect "dolls", loved the mascot, the crested ibis.

In the National Games arena, these "small animals" will become a unique landscape.

On September 14, the media workshop in the main media center of the National Games in Xi'an, Shaanxi.

The 14th National Games of the People's Republic of China will open in Xi'an, Shaanxi on the 15th.

In this National Games, the addition of science and technology will bring a brand new experience to the audience.

The "Mobile 5G+Smart Watching" mode was the first to debut on the tennis court.

When watching the game, the audience can independently choose the game progress, star close-up, coach close-up and half-time dynamics and other watching scenes.

It is reported that the 63 National Games venues in Shaanxi have achieved full coverage of the 5G network. This is the first time that 5G technology has been applied to top national sports events on a large scale.

The picture shows the village opening ceremony of the 14th National Games.

Highlight 6: A new experience in the National Games Village

As the game begins, the National Games Village will meet with everyone more and more frequently.

The efficient operation of the battery car shortens the distance between the athlete’s village, the technical officials’ village and the media reporter’s village; the anti-collision bars in the corners of the accommodation rooms are fully humanized; the eight major cuisines, western dishes and other rich dishes will stimulate everybody A guest’s taste buds; in the interactive experience area of ​​the Athlete’s Village Volunteer Service Center, you can experience everything from paper-cutting, horse spoons, clay pottery and other intangible heritage projects, allowing athletes to experience Shaanxi culture up close...

From Roujiamo, double-headed cloth tiger, to the Big Wild Goose Pagoda in the hands of paper-cut artists, Shaanxi elements can be seen everywhere in the National Games Village.

Highlight 7: The sparks of the collision between Shaanxi culture and sports

The phrase "Lai Lie" contains thousands of people, showing the warmth and hospitality of the people of Shaanxi.

In the National Games' creative promotional video "All Faces and Faces", the sports on the field and the production process of Shaanxi specialty noodles are integrated.

When passionate sports meet the enthusiastic people of Shaanxi, a splendid event will surely be staged in the next 13 days.