An interesting move by Semak, an unrealized chance of Dziuba and an accurate shot to Lukaku: how Zenit lost to Chelsea in the Champions League

Zenit away were defeated by Chelsea in the first round of the Champions League group stage. The meeting at Stamford Bridge stadium ended 1-0, with Romelu Lukaku scoring the only goal. Among other things, the match was remembered for an interesting tactical move by Sergei Semak, who made a bet on a scheme with three central defenders, as well as an unrealized moment by Artem Dziuba. 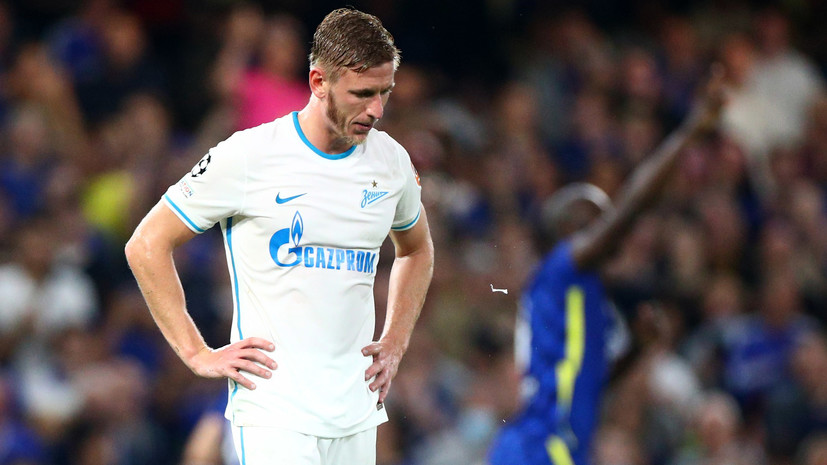 Over the past ten years, Zenit has never had to start in the Champions League with a match with such a status rival. Yes, in 2013 they started with a meeting with Atlético, the future finalist of the tournament, but at that time Madrid were only the third Spanish team to reach the group stage of the main European Cup for the first time since 2009. This time, Sergei Semak's charges went to Stamford Bridge to try their hand against the current trophy owner, Chelsea.

And just a day before it began, the situation of Petersburgers seemed, if not critical, then very difficult. If “Zenith” (like “Chelsea”) still managed to get the legionnaires from Brazil to participate in the match, then problems arose with the representative of the Colombian national team. Due to coronavirus restrictions and visa issues, defensive midfielder Wilmar Barrios was unable to fly to London on Monday, making the chances of his appearing on the field scanty. However, this issue was subsequently settled, and the footballer was able not only to cross the UK border, but also to be in the starting lineup. The same cannot be said about the injured Vyacheslav Karavaev, Magomed Ozdoev and Deyan Lovren.

As a result, Zenit's roster for the meeting with Chelsea turned out to be rather experimental. The place in the goal was taken by Stanislav Kritsyuk, recently acquired from Zhil Vicente, a pair of central defenders were formed by Yaroslav Rakitskiy and Dmitry Chistyakov, who made his debut in the main stage of European competitions, and at the edges were Douglas Santos and Alexei Sutormin, who played the role of captain. One of the main intrigues was the appearance of Artyom Dziuba at the start, but the Russian forward remained on the bench. Serdar Azmun was at the forefront, and in the middle line, in addition to Barrios, three Brazilians came out at once - Malcolm, Claudinho and Wendel. Only Daler Kuzyaev managed to wedge himself into the Latin American quartet.

Chelsea also had some minor line-up problems, but the losses to N'Golo Kante and Christian Pulisic seemed insignificant given both Thomas Tuchel's huge selection of performers and the level of his opponent. It is possible that the German specialist would have sent more attacking players to the center of the field, but the Frenchman's injury left him no other choice. Together with Jorginho, Mateo Kovacic came out, and this choice was quite justified. In the fourth round of the Premier League, the Croat took part in organizing two of three goals against Aston Villa - he scored himself and made a great pass to Romelu Lukaku.

On the eve of the match, the optimism of many domestic fans could be due to the fact that last year Krasnodar took the points from London. However, it was not entirely correct to draw parallels, because that meeting took place within the framework of the final, sixth round of the group stage, and by that time Chelsea had practically guaranteed itself the first place in the quartet. This time, Londoners were much more motivated. In this regard, it was more logical to recall the first game, which ended with a score of 4: 0 in favor of the “aristocrats”.

And Semak did everything possible to prevent this from happening. Realizing the vulnerability of his defensive line, he decided to strengthen it at the expense of Barrios, who actually played the role of the third central defender and insured Chistyakov. This allowed both Lukaku and Mason Mount to play against Hakim Ziyech to maximize their density and make it as difficult as possible. During the entire first half, the reigning Champions League winners struck only four shots on goal, three of which were blocked.

The counterplay was noticeably worse.

In the first half, “Zenith” imposed it until the 20th minute, having managed to fit in this segment two dangerous episodes with the participation of Azmun and Claudinho.

Both could go one on one with Edouard Mendy, but the Iranian lost the horse fight and could not take advantage of Rakitsky's luxurious long throw, and the Brazilian handled Sutormin's serve very unsuccessfully.

In this regard, although Zenit played the first half quite well in terms of the result, its prospects did not seem to be the most favorable.

It was clear that it would hardly be possible to contain Chelsea's attacks throughout the match, and this fear was confirmed in the opening of the second half.

It took the hosts only two minutes to disturb Kritsyuk for the first time.

And although Ziyech's blow did not carry a threat for the Russian goalkeeper, it became a wake-up call for the guests.

And over the next ten minutes, the tension at the Zenit gate only grew. Rhys James missed a great chance to score by missing the near corner. Antonio Rüdiger failed to complete a magnificent solo run of 40 meters. Chelsea felt that the opponents were more vulnerable, and went ahead, but almost conceded themselves. The Petersburgers demonstrated that they know how to counterattack, and several times they almost punished the enemy for mistakes in the center of the field. Azmun had more than one opportunity to meet Mendy, but the defenders each time were a little more agile or stronger in single combats.

However, Zenit failed to hold out for the entire match. With the appearance on the field of Kai Havertz, the superiority of the owners became overwhelming, and they managed to open an account after throwing into the penalty area on their marker striker. Chistyakov still could not play the entire meeting without error and allowed Lukaku to hit his head unhindered after the filing of Cesar Azpilicueta. At the time of the transfer, the defender focused on the Spaniard and gave the attacker time to run behind him. The rest was a matter of technique.

After that, it was already pointless to sit in your own half, so Semak went all-in.

Instead of the unusually passive Malcolm and Wendel, Artyom Dzyuba and Alexander Erokhin came out, and this move almost justified itself.

The former captain of the Russian national team had a great chance to restore parity, but failed to close the chamber from the flank.

The forward tried to break through in the fall, but did not hit the ball, but Mendy, who rushed to intercept.

As expected, Semak's wards spent the last minutes in the attack, but could not create anything dangerous at the opponent's goal.

But they could have missed the second ball, when in the fourth compensated minute they missed Lukaku's spurt.

The Belgian broke through to the penalty area, swung the defender with a trick, but he miraculously managed to block his blow.

Zenit lost to Chelsea away, but overall left a rather pleasant impression of their performance. It was hardly worth expecting that the Petersburgers would be able to fight on equal terms with the current winners of the tournament, but the plan to contain the formidable opponent turned out to be quite effective. Nevertheless, Semak's wards were unable to interrupt a losing streak in the Champions League and were unable to achieve victory in the eighth match in a row.