Ukrainian coach Sergey Rebrov became the fourth coach in the history of Al Ain club in the era of professionalism to win the "full mark" in the first three consecutive rounds of the league competition, after he led the "leader" this season to beat Khorfakkan 3-1, the Emirates 2-0, and Bani Yas 1-0 in a row 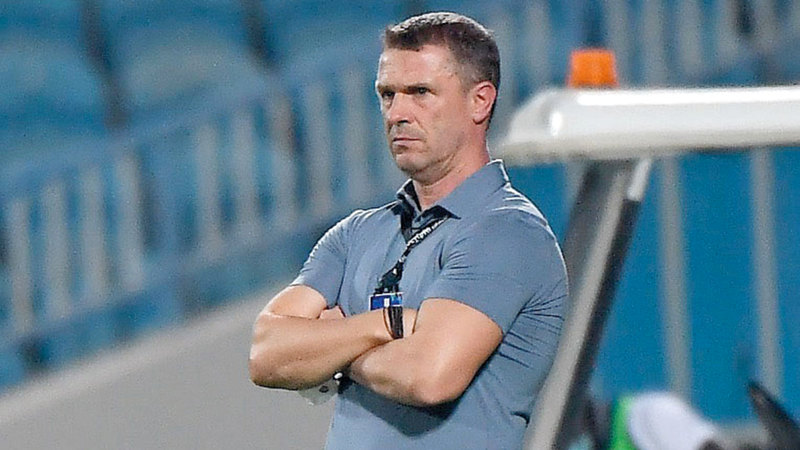 He beat Khorfakkan and the Emirates and untied the “heavenly” knot

Ukrainian coach Sergey Rebrov became the fourth coach in the history of Al Ain club in the era of professionalism to win the "full mark" in the first three consecutive rounds of the league competition, after he led the "leader" this season to beat Khorfakkan 3-1, the Emirates 2-0, and Bani Yas 1-0, in a row, to lead the competition with nine points, with a goal difference from Sharjah.

The Ukrainian coach joined the list of former coaches, German Winfried Schaefer, who collected nine points in the 2009-2010 season by defeating Al-Nasr, Al-Ahly and Ajman, and Croatian Zlatko Dalic, who equalized the same start in the 2015-2016 season by defeating Al Dhafra, Al Wasl and Sharjah, while his compatriot Zoran Mamic repeated The same number in the 2018-2019 season against the Emirates, Al Dhafra and Al Nasr.

Al-Ain’s performance improved clearly under the leadership of coach Sergei Rebrov, who succeeded in employing the potential of his players, and the “leader” did not suffer in scoring goals unlike previous years, and he also succeeded in maintaining his progress in the result, and the defense line became more solid than before, as The team conceded one goal in the three matches for the first time in seven seasons.

The Ukrainian coach began to break the team’s historical contract, as he ended the series of not beating Baniyas at Al Shamkha Stadium, which lasted for 2463 days, since the team’s last victory on December 12, 2014 with three clean goals, as he led the team to victory the day before yesterday with a clean goal, which is What contributed to the rise in the shares of the coach, who is counted on by the fans, to return the team to the podiums after a period of absence.

Al Ain's first team supervisor, Abdullah Ali, expressed their satisfaction with the victory off the field, praising at the same time the strong public support that strengthened the players and gave them the motivation to return from Baniyas with a third consecutive victory.

Regarding the absence of Bandar Al Ahbabi and Caio Canedo from the main list against Baniyas, he told the official website of Al Ain Club: "Since their return from the national team camp, they have not participated in the training sessions, as Bandar suffers from a rise in body temperature, and Caio is also suffering from inflammation of the ankle ligaments." .

Bani Yas coach, Romanian Daniel Isila, launched a scathing attack on the refereeing after his team lost to Al Ain, and said in the press conference: “A big team playing in front of us does not need all this aid to win, let what happens on the field determine who can win and not about who can win.” Arbitration Aid Route.

He added, "I would have liked to speak at the press conference about football, but the refereeing mistakes became unbearable."