The team is not ready for the World Cup qualifiers

The national football team faces an ambiguous fate in the decisive role of the Asian qualifiers for the 2022 World Cup, after it continued to bleed points after its 1-1 draw with Syria, the day before yesterday, in the second round for the first group account at Abdullah II Stadium in the Jordanian capital. 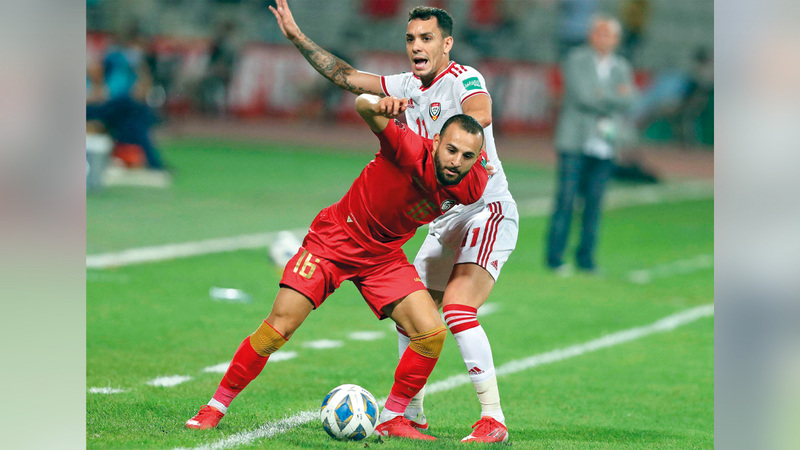 Repeat the mistakes of the Lebanon match against Syria.. 7 technical problems that need treatment from Marvik

The team is not ready for the World Cup qualifiers

Caio did not provide the required technical return with the national team.

The national football team faces an ambiguous fate in the decisive role of the Asian qualifiers for the 2022 World Cup, after it continued to bleed points after its 1-1 draw against Syria, the day before yesterday, in the second round for the first group account at Abdullah II Stadium in the Jordanian capital, Amman, which he chose. The Syrian team is the venue for the match, bringing the number of points the team missed to four points in only two matches, contenting itself with collecting two points out of six that could have strengthened its chances of competing strongly for the qualification ticket for the World Cup, especially since the points of the matches of Syria and Lebanon were within its reach, given that The two teams are considered the weakest among the teams in Group A, which also includes South Korea, Iran and Iraq.

Six technical problems emerged among the team that needed a radical treatment by the technical staff of the team led by Dutch coach Marvik, represented in the weak technical and physical readiness of the team players, and Marvik's bet on preparing the team through the first and second rounds of the league, and not playing any friendly match before facing me. Lebanon and Syria, although the two rounds of the league showed weakness in the technical level of the teams in general, and the short period of preparation of the team for the matches of Lebanon and Syria, which did not exceed only 10 days, in addition to the presence of clear defensive gaps, most notably the fatal mistake committed by defender Shaheen Abdel Rahman, which gave the Syrian team the equalizing goal Which was scored by Mahmoud Al-Bahr (64), in addition to the continued wasting of easy opportunities, especially by Mabkhout, Caio and Lima, as well as the appearance of the trio of Mabkhout, Caio and Lima at a modest level that is not commensurate with the importance of the match.

The Iranian team leads the group standings with six points by defeating Iraq 3-0, while the South Korean team occupies second place with four goals by defeating Lebanon with a clean goal, and the UAE team scored two points, while the teams of Syria, Lebanon and Iraq each received one point each. .

A state of anger prevailed among the fans of the national team and the Emirati sports street because of the unconvincing performance that the team has been providing since its appearance in the final round of the World Cup qualifiers.

The team appeared in the Syria meeting with a lackluster performance and a shaky image, and his identity and personality were absent from him, and everyone expected him to appear in a different way to the one he appeared in the Lebanon match, but he repeated the same mistakes in the Lebanon match, which ended in a draw without goals. In fact, the team’s condition It got worse in the Syrian match, because its net conceded a goal, while it kept a clean sheet in the previous Lebanon match.

Misfer: Marvik has trump cards on the bench that he didn't use

The former national football team coach, Dr. Abdullah Misfer, confirmed that the Lebanon and Syria matches clearly revealed the team’s lack of readiness for these qualifiers because it was not prepared in a manner commensurate with the importance of this stage of the qualifiers, noting that the team’s fate is in the hands of others and it has no choice but to win the tournament. The matches of Iran and Iraq to maintain his chances in the competition, although the matter is not easy and requires great work by the technical staff, considering that any result other than winning the two matches will lose Al-Abyadh his chances in the competition.

Misfer told "Emirates Today": "In my estimation, the technical management of the match was weak, although it was supposed to be better, in addition to making good use of the elements on the bench."

He added, "Unfortunately, the team continued to play the style throughout the match, at a time when it was supposed to change the style of play to suit the conditions of the match."

He explained: "As for the defensive gaps in the team, it is related to the team's system, which is the defensive system adopted by the coach, while there should have been interventions by the coach to solve the defense problem, and this did not happen."

Misfer pointed out that the coach had winning cards in the team, but he did not take advantage of them, and it seemed as if the coach was thinking of a draw in this match, and he lacked the courage to find solutions.

1- Poor physical fitness of the players.

2- The preparation period for the matches between Lebanon and Syria did not exceed 10 days.

2- Marvik bet on preparing the national team through two rounds of the league.

3- The presence of defensive gaps without any interventions from Marvik to solve them.

5- The technical level of the Mabkhout, Cayo and Lima trio has declined.

6- Marvik did not take advantage of the winning cards on the bench.

• A mysterious fate awaits White in the competition for the qualification ticket.