Chinanews Client Beijing, September 7 According to ITTF news, in November this year, the ITTF presidential election will be held during the World Table Tennis Championships in Houston, USA. As the preparatory work for the presidential election of ITTF coincides with the time for the Chinese team to prepare for the Tokyo Olympics, Liu Guoliang, chairman of the Chinese Table Tennis Association, ch 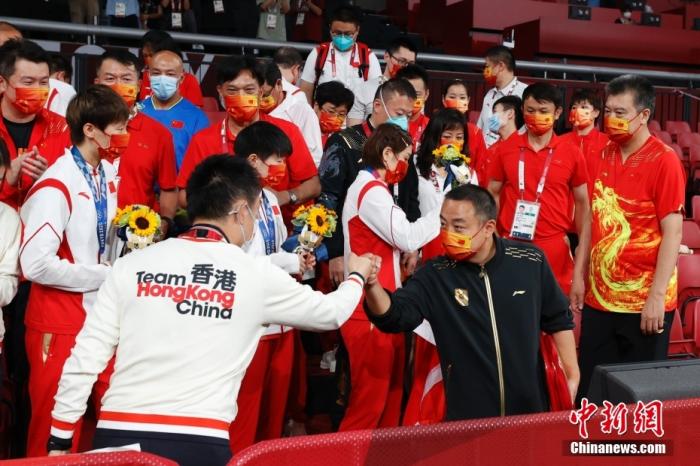 Chinanews Client Beijing, September 7 According to ITTF news, in November this year, the ITTF presidential election will be held during the World Table Tennis Championships in Houston, USA.

As the preparatory work for the presidential election of ITTF coincides with the time for the Chinese team to prepare for the Tokyo Olympics, Liu Guoliang, chairman of the Chinese Table Tennis Association, chose to give up participating in the election.

The Japanese team won the silver medal and the Hong Kong team of China won the bronze medal.

The picture shows Liu Guoliang clashing with the coach of the Hong Kong team to pay tribute.

After the Tokyo Olympics, Liu Guoliang said in an interview with the ITTF: "Table tennis is China's national game, so it is not just that we can win a few gold medals in the Olympics, but also to maintain everyone's long-term expectations for the national game. And confidence, and maintain the dominance of Chinese table tennis in the world."

"The host of the Olympic Games Japan won a mixed doubles gold medal, and the next four gold medals with the most important gold content were taken by the Chinese team. This result is beneficial to the overall development and planning of table tennis in the world." Liu Guoliang revealed that he will continue to take root. Based on the construction and innovation of the entire system of Chinese table tennis, sum up the experience of this Olympic Games and build a more advanced development system.

Standing at the height of the world table tennis world and analyzing the current situation, Liu Guoliang said: “Throughout this Olympic Games, it is very clear that the women’s side is a Sino-Japanese matchup. This situation may continue for several years. The men’s trend is still the world playing. China, Eurasian powers have launched huge challenges to China, including African table tennis has also made great progress."

In Liu Guoliang’s view, many young and aggressive athletes have emerged in this Olympics. The world men’s table tennis has entered an era of co-existence, and the world melee situation of men’s table tennis will continue. In addition to staying strong, the other players are on the same level, and their respective advantages are very weak."

In November this year, the ITTF presidential election will be held during the World Table Tennis Championships in Houston, USA.

ITTF CEO Steve Denton said: “I really admire Liu (Guoliang)’s attitude. This campaign is actually the best opportunity for Liu Guoliang. He will also choose the best candidate. He did his job well with an outstanding status. But he decided to devote all his energy to preparing for the Tokyo Olympics first."

In 2020, Liu Guoliang will be the chairman of the World Table Tennis Professional League Council.

At the end of October 2020, the China Table Tennis Association under Liu Guoliang worked closely with the ITTF to successfully host the men's and women's World Cup, ITTF finals and other restart event series in China, and set a template for the restart of world sports events in the epidemic.

This is the 35th gold of the Chinese delegation in this Olympics and the fourth gold that Guoping won in the Tokyo Olympics.

In this Olympics, Zhang An of the United States, Diaz of Puerto Rico, Tian Zhixi of South Korea, Lin Yunru and Zheng Yijing of Chinese Taipei, and Du Kaixian of Hong Kong, China all performed well.

In this regard, Liu Guoliang said: "I have always advocated'Chinese table tennis, shared by the world'. It is a big pattern and a big strategy. After joint training with the Chinese team, the players not only have considerable skills and tactics. Progress, and at the same time, it is a good platform for understanding the sport of table tennis, as well as the exchange of different cultures and ideas from all over the world."

Liu Guoliang said: "The whole world table tennis is now completing a process of replacing the old with the new. This is a historical development track and a process to promote the sport. Table tennis needs fresh blood, new champions, and new idols. A new era is approaching. In fact, this Olympics is the world’s strongest impact on China. The suspense of table tennis is back. Such a situation can actually promote the Chinese team to make more progress."

In the next few years, Liu Guoliang will serve as a member of the ITTF Executive Committee and participate in the work of ITTF decision-makers.

He expressed that he hoped that he would be able to further familiarize and study the ITTF platform system and the status quo of various member associations, so that he could think about the future of table tennis from the perspective of the development of the world table tennis at a deeper level.

In addition, Liu Guoliang also said that in the future, he will pay more attention to the development and promotion of WTT, create a more professional path for the players, bring the world's most exciting table tennis game to Chinese fans, and also bring the success of Chinese table tennis. The experience is promoted around the world, allowing table tennis to blossom and develop in coordination on all continents around the world. (over)