Paralympic champion Sarah Mohammed Al-Junaibi, who won the UAE's first women's medal in the history of the Paralympic Games, aspires to repeat the achievement she made in the last edition, "Rio de Janeiro 2016", when she won the bronze medal in the shot put class "F33". 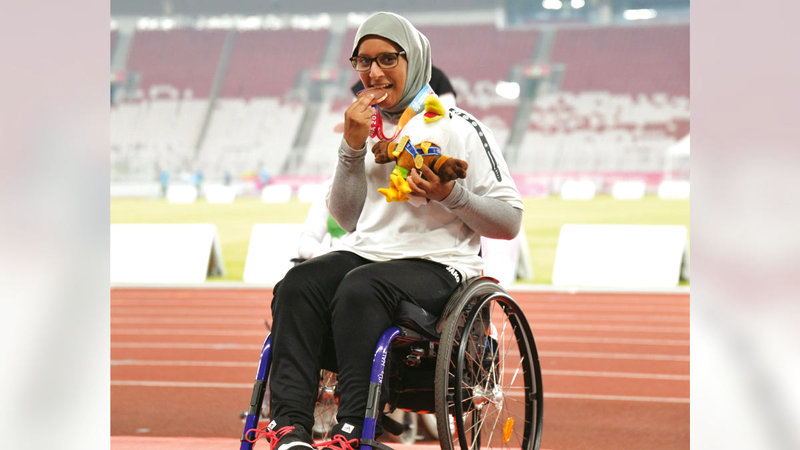 Paralympic champion Sarah Mohammed Al-Junaibi, the UAE's first women's medalist in the history of the Paralympic Games, aspires to repeat the achievement she achieved in the last edition of "Rio de Janeiro 2016", when she won the bronze medal in the F33 shot put.

The Emirati champion launches her first participation in the 16th edition of the Paralympic Games Tokyo 2020, which is currently being held in the Japanese capital, with the participation of 4,400 athletes representing 163 countries, in shot put competitions, at 14:14 minutes Emirates time, as our hero seeks to snatch a medal for the UAE and raise its flag high in this regard. The Paralympic event.

On the other hand, the cycling team continues its participation in the Tokyo Games through Ahmed Al-Mutaiwee, who competed the day before yesterday, a race against the 24 km class "C2", beating world champions, and providing a good return in his first appearance in the Olympic forum, where he scored Al-Mutaiwee's second appearance for the UAE cycling team in the current session, when he is participating in the C2 category road race, this morning among a group of world stars, aspiring to gain more experience and friction.

In the same context, our heroes Abdullah Sultan Al-Ariani and Saif Al-Nuaimi were unlucky to qualify for the 10m recumbent air rifle shooting final in the R3 category, and Aisha Al-Muhairi in the 10m mixed prone air rifle shooting.

Muhammad Khamis returns to Dubai and begins his treatment journey

Golden champion Muhammad Khamis returned to Dubai after his injury renewed and his inability to complete his career in the Tokyo Paralympic Games, according to the competition regulations, which stipulate that players must leave 72 hours after the end of the competitions, as he begins the treatment journey by the medical staff of our national teams for people of determination.

The injury prevented the champion Muhammad Khamis from completing his career in the tournament, when he competed in the 88-kg powerlifting competitions the day before yesterday. and gold in Rio de Janeiro in 2016), but he felt pain in the pectoral muscle from the left side, an injury he suffered while participating in the external camp in Macedonia 30 days before the start of the tournament.