Marvik: I still believe in the chance of the national team qualifying for the 2022 World Cup

The national football team continues its daily preparations in preparation for meeting the Lebanese team, in the match scheduled at 20:45 tomorrow evening in Dubai, in the first group of the decisive round of the Asian qualifiers for the 2022 World Cup. 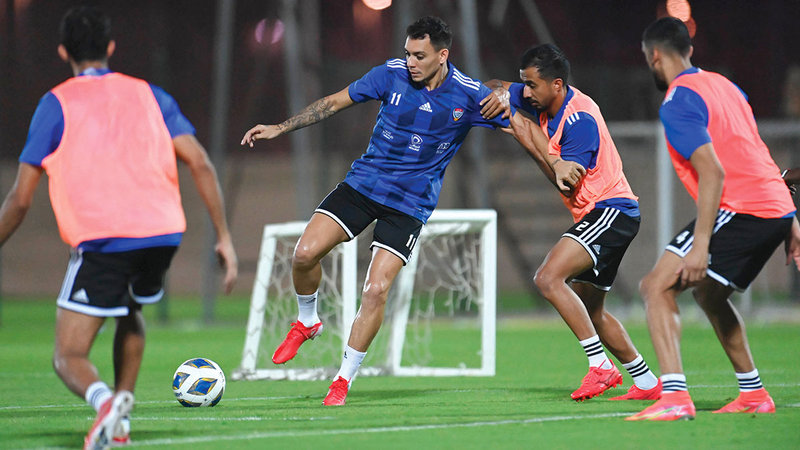 Marvik: I still believe in the chance of the national team qualifying for the 2022 World Cup

The national football team continues its daily preparations in preparation for meeting the Lebanese national team, in the match scheduled at 20:45 tomorrow evening in Dubai, in the first group of the decisive round of the Asian qualifiers for the 2022 World Cup, as the team performed its main training yesterday evening, at Al Wasl Club Stadium. Sub, Zabeel Stadium will host the match.

The technical staff, led by Dutch coach Marvik, was satisfied with a list of 26 players, after Hassan Al Muharrami was excluded due to injury.

"I said during the pre-World Cup qualifiers last June that we have a great opportunity to qualify for the World Cup, and I still believe in that, and I am confident in the players," Marvik said in a press statement.

He added, "The team's preparations are taking place in a very special way, after the team started to regain its victories in the last qualifiers last June."

"We had a closed camp in Serbia, and we are currently putting our full focus on the opening match against Lebanon," Marvik added.

Marvik indicated that there will not be an easy match, and that all matches will be difficult, stressing that they have to prepare well and that his confidence in the players is great.

Regarding his opinion on the teams of the first group, as well as the first two matches in the qualifiers against Lebanon and Syria, Marvik confirmed that he is thinking about the first match against Lebanon, and that he must win it first before thinking about anything else, indicating that he respects all the teams of the group, and that his goal is to impose His style on the field, and that the team performs in its own way, not the way of the opponent.

The coach praised the seriousness and commitment shown by the players during the current camp.

Regarding the injury suffered by the player Hassan Al-Muharrami, Marvik confirmed that he was saddened by the injury suffered by the player during the start of training and warm-up, without any contacts with any player, pointing out that he has great confidence in his abilities as a player who constitutes a technical addition to the team, noting that Al-Mahrami is a small player. Age, talented, and began to enter the atmosphere of team play and the team's squad, stressing that he was confident that Al Muharrami would be able to regain his place after recovery.

Regarding the message he sends to the national team’s fans after the Football Association’s decision to allow the public to attend the stands at 60% of the stadium’s capacity, Marvik confirmed that he wishes the public to attend in abundance, indicating that he hopes that the public has enjoyed the team’s performance during its previous qualifiers matches last June.

"We felt the support of the fans in the stands, and I hope this scene will be repeated in Lebanon's match tomorrow, and in all the matches that the team will play at home," the team coach said.

The supervisor of the national football team, Obaid Hammad, confirmed that the team is fully prepared and ready to meet the Lebanese team tomorrow, Thursday, describing the match as key, and that it will not be easy, and that the beginnings are always difficult, stressing that the team entered the stage of difficult and decisive roles to qualify for The World Cup, stressing the great support that the team enjoys from the Football Association, considering that the conditions are fully prepared for the team to appear in the image that the sports street is waiting for, pointing out that the coach is satisfied with the team's preparations for the Lebanon match.

The team supervisor indicated that the coach plays the largest role in the process of preparing the players from a technical point of view on the field, as well as from a psychological and preparatory point of view for the match.

He continued, "The Professional League took the recommendation made by the coach of the team, by playing two rounds of the league before the team started its campaign in these qualifiers."

Hammad revealed that the coach preferred to prepare the team by playing official matches in the league, as this is better than playing friendly matches.

Hammad confirmed that the technical staff was satisfied with the returns provided by the players in the first and second rounds of the league.

He continued, "Although the same names that participated with the national team were chosen before, the list also included other players who played with their teams in the first and second rounds of the league."

When asked about the difference in technical and administrative capabilities between the UAE and Lebanon teams, Hammad confirmed that with regard to the potential difference, the Lebanese team includes nine professional players in its ranks, pointing out that the Lebanese team narrowly lost two goals to one in the last match I gathered with his national team. South Korea, in the previous stage qualifiers.

Mahmoud Khamis: We promise the public to make every effort

Defender of the team Mahmoud Khamis confirmed that their preparations as players have been completed, promising the public to make every effort to achieve victory, as it is the beginning of the start for the team, describing the motivating atmosphere of the camp, and that they perform their daily training with high morale and unparalleled enthusiasm.

"We are preparing well for the important match, and the spirit of one team prevails between us, and everyone is working for a common goal, which is to make the fans happy," Khamis said.

Khaseef: The team beats one man

The goalkeeper of the national football team, Ali Khaseef, confirmed that they in the team are working sincerely, all with the heart of one man, in order to appear well and achieve a result that enhances the team's chances of qualifying for the World Cup.

He added, "We realize that these qualifiers are crucial, so we are in a state of intense focus, and we respect the Lebanon team, which showed a good level during the last qualifiers."

Goalkeeper Ali Khaseef stressed the importance of the public attendance, supporting the team and motivating the players in the Lebanon match, and that they used to support the public for them in such important stages, describing the Lebanon match as the beginning of the right path to qualifying for the World Cup.