Ligue 1: a man in custody after violence during the Nice-Marseille match

A man was taken into custody on Monday suspected of hitting an OM player during the Nice-Marseille match on Sunday. The meeting had to be interrupted after supporters invaded ... 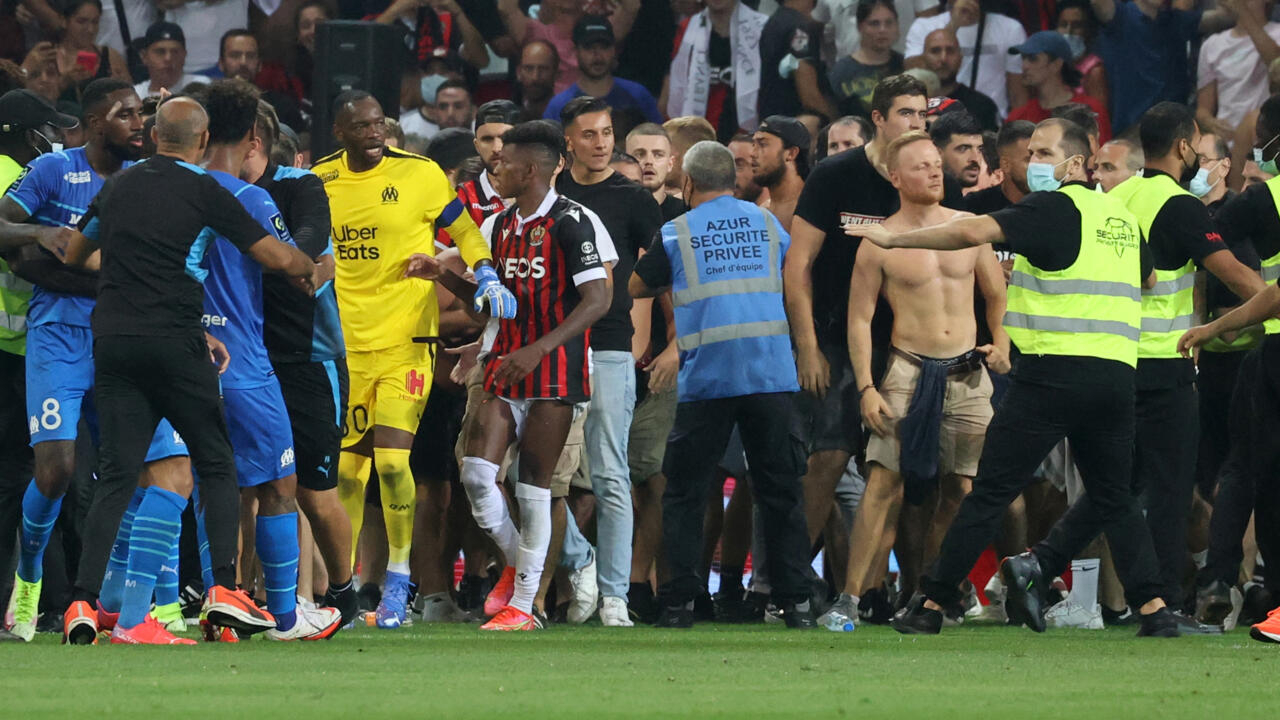 A 28-year-old man was arrested and taken into custody on Monday 23 August at the end of the day, AFP learned from police and judicial sources.

He is suspected of having struck an OM player during the incidents that erupted during the Nice-Marseille match on Sunday.

The man was arrested in Mandelieu-la-Napoule, in the Alpes-Maritimes, said the police source.

"It would be a priori a Nice supporter," Nice prosecutor Xavier Bonhomme told AFP.

Sunday evening, three minors had already been arrested around 10:30 p.m. during the overflows.

They were handed over to their families and were not taken into custody, the police source detailed.

A stand at the Nice stadium closed for four matches

The prefect of the Alpes-Maritimes for his part announced Monday evening the closure "for the next four matches played at home" of the Popular South stand of the Nice stadium.

"Faced with the seriousness of the incidents that have occurred, without waiting for the sanctions that it is up to the Professional Football League (LFP) to decide, the prefect of the Alpes-Maritimes took the following decisions this evening: closing the People's South tribune where the incidents broke out for the next four matches played at home, "wrote Prefect Bernard Gonzalez in a press release.

He also announced the "setting up as soon as possible of an anti-projection net in front of the Popular Sud platform", the "study of a reinforced device for securing the Visitors platform in order to prevent projections and attacks" and the "enactment of individual stadium bans against individuals perpetrating violence as soon as they are identified by the police".

The match of the 3rd day of Ligue 1 between Nice and OM was interrupted Sunday in the 75th minute after supporters invaded the pitch.

After more than an hour and a half, the meeting was definitively stopped, the Marseillais refusing to resume the match.

The Nice prosecutor's office announced Monday the opening of several investigations, in particular for "throwing projectiles" and "aggravated willful violence".

The LFP convened the two clubs on Wednesday in the disciplinary committee.