The professional league began under its new name “ADNOC” without surprises, as the continued superiority of the Sadar teams appeared, with the exception of the Al-Nasr team, which suffered a strong loss against Ajman with three clean goals, but the noticeable thing is not to win easily against teams that seem to be a difficult number in the tournament. won 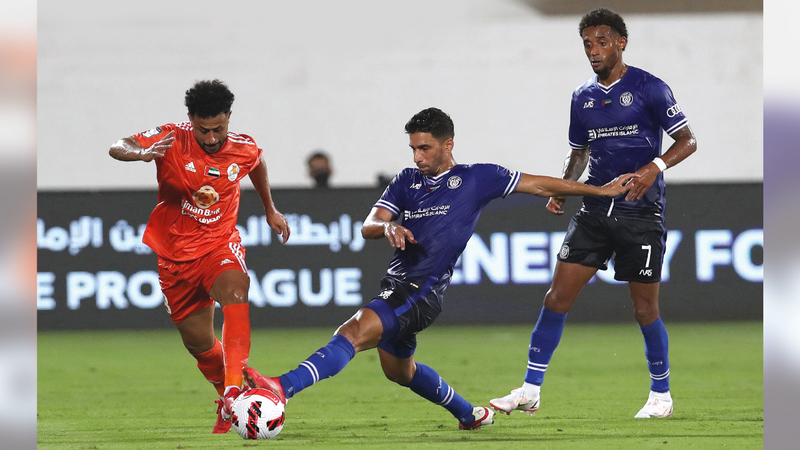 Khaled Obaid: Al-Wahda and Al-Jazeera are the most convincing, and Ajman is a difficult number.. And the audience confirms:

Al-Nasr received a surprising loss in the first round, 3-0 from Ajman.

The professional league began under its new name “ADNOC” without surprises, as the continued superiority of the Sadar teams appeared, with the exception of the Al-Nasr team, which suffered a strong loss against Ajman with three clean goals, but the noticeable thing is not to win easily against teams that seem to be a difficult number in the tournament.

Sharjah beat Al-Ittihad Kalba in lost time and by an individual error from the Kalba defender cost his team the first loss after it was close to exiting with a point, and Shabab Al-Ahly, the triple champion last season, achieved a hard-earned victory over the Emirates team, which was a strong match, but it was not Shabab Al-Ahly who appeared last season.

Al Jazira defeated Al Dhafra with two goals, minus the number in the second half, which means that there is no suffering in achieving victory, and Al Wahda team showed its strength from the first round, while it appeared that Al Orouba team may suffer in the tournament after losing at home with a clean four that made it at the back of the table from first round.

The surprise was the loss of victory by 3-0. Al-Aynaoui also reassured his fans by achieving a strong victory over Khorfakkan, although it was not convincing enough, but he managed to return against a strong opponent with a victory and three precious points.

Ajman dazzled his fans with a distinguished technical level and distinguished tactical performance, through which he succeeded in imposing his style on his match against Al-Nasr. Almost without attack in front of Al-Wasl after losing the services of the Brazilian attacking Joao Pedro in the interest of Al-Wahda and has not compensated him so far.

"Emirates Today" asked a question about the audience's opinion in the first round matches about the most prominent phenomena that the tour witnessed, on the social networking site "Twitter", which is: "We shared the opinion ... with the start of the ADNOC Football League, what are the most prominent observations at the end of the first round of the tournament?" tournament?

Four answers were monitored: the awakening of Ajman and the Emirates, the level of Baniyas without a striker, the loss of victory, the return of the leader.

During the vote, which was attended by 226 participants, the audience chose the loss of victory as the most prominent in the first round by 37.7%, then the return of the leader 34.3%, the awakening of Ajman and the Emirates 19%, and finally the level of Baniyas without a striker 9.2%.

Technical analyst Khaled Obaid confirmed that the Al Wahda team is the most convincing in the first round and it appeared that it will be a difficult number in the tournament, after it made legalized but effective assignments, especially by contracting with the Brazilian Joao Pedro, the top scorer of Bani Yas and Al Dhafra and the best foreign player last season, as Obaid praised At the technical level of the Al-Jazira team, and that it is the most stable and stable.

Khaled Obaid told "Emirates Today": "Al-Wahda and Al-Jazira are the most ready and convincing in the first round. The victory is not ready and there is something wrong with the team. Al-Ain team achieved the three points, which is the most important, but without a collective form."

The Ajman team this season is completely different from last season thanks to the distinguished and good contracts.”

He added, "It was expected that Kalba and Khorfakkan would show better with this number of contracts, and that may appear in the upcoming matches.

Sharjah played minus important players and succeeded in winning because it has individual materials that can end attacks with individual skills, and I think that the four Al-Wasl foreigners did not achieve the required addition, but all of these things are in the first match and may change in the coming rounds.

To view the top scorers and the standings of the teams for the first round,