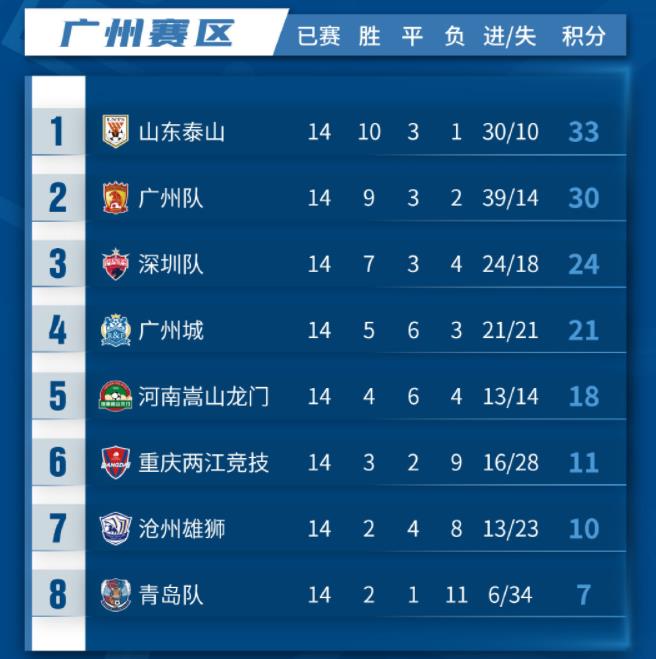 Chinanews Client Beijing, August 16 (Bian Liqun) With Beijing Guoan's 4:2 victory over Shanghai Shenhua, the first stage of the Super League came to an end on the evening of the 15th.

The standings of the Guangzhou Division of the first stage of the Chinese Super League.

The three teams competed for two tickets to the championship group, plus the stall between the end of the Olympics and the top 12 of the world preliminaries, the "crack" of the Chinese Super League finally has "survival space", setting off a long-lost wave in the sports world .

In fact, the 8th round of the Chinese Super League was supposed to be held on July 25, but due to the transit of typhoon "Fireworks", the four games of that round were forced to be postponed. For this reason, in the battle of life and death related to the competition for tickets to the championship group. , There can be a matchup between Guoan and Shenhua.

The first stage of the Super League Suzhou Division standings.

Recently, the situation of Guoan and Shenhua teams is not ideal. After losing 1:3 to Tianjin Jinmen Tigers, the situation of Beijing Guoan's promotion to the championship group is in jeopardy. Fortunately, they stubbornly drew a draw with Shanghai Harbour and defeated the "dark horse" Changchun Yatai. Finally saved hope.

Shenhua experienced a change of coaches after the previous four-round defeat. Interim coach Mao Yijun took over Cui Kangxi's coach, and after taking office, he won the Dalian native and Tianjin Jinmen tiger in a row.

However, in this game, almost showing a one-sided situation, in the opening only 15 minutes, Guoan achieved a 3:0 lead, and Shenhua had little power to fight back.

In such a head-to-head game, the latter was obviously affected by the turbulence of the coaching change.

Beijing Guoan defeated Shanghai Shenhua 4:2 in the battle of life and death.

But in the 41st minute of the game, the Hebei team equalized by Leonardo and finally kept the draw to the end, killing Shenhua's fantasy.

In the first round of this season, Shanghai Shenhua defeated Beijing Guoan 2:1. After that match, many media and fans regarded Shenhua as the top favorite to win the championship. Thinking about the current situation, it is unavoidable.

Shenhua, who was full of extra support and many capable domestic players, failed to enter the championship group and was somewhat surprised.

For Shanghai Shenhua, such encounters are obviously not ideal, and they are unwilling to see them, but for the Chinese Super League, such an unpopular "drama" can also be regarded as bringing some waves to the long-lost league, especially It is the ups and downs of the competition for the championship group, the high number of goals, the smell of gunpowder on the field and the world wave, so that the game finally has some talk and gimmicks, and got rid of the "Buddhist" style of painting.

The Hebei team, which kept the tie, successfully advanced to the championship group.

From the rematch on July 18 to the end of the “Beijing-Shanghai Derby” on August 15 for the first stage of the Chinese Super League, in 28 days, the Chinese football team “gave way” to prepare for the World Cup preliminaries. There were as many as 9 rounds of matches. The team has an average of 3 days to play a game, with only two days between each game.

In Suzhou and Guangzhou, the two major competition areas in the south, the high temperature has also become a huge difficulty for the teams.

The stamina-saving method of playing, the forced rotation of the lineup, and the uneven configuration of foreign aid for most of the teams have made the Super League this season very flat and greatly reduced the viewing experience.

Even some clubs have been exposed to long-term wage arrears. Hebei team player Ding Haifeng once revealed on social media that he has not paid wages for a year and a half.

Due to numerous factors, the Chinese Super League's dullness is expected.

Looking at the clubs with ideal results in the first stage, there are nothing more than two categories. The first category is full of foreign players. For example, Shenzhen Football Club, third in the Guangzhou Division, and Changchun Yatai and Shanghai Haigang, the top two in the Suzhou Division, have a full 5 for a long time. Famous foreign players, the advantage is self-evident when playing against double foreign players and even all-China teams.

The other type is a strong lineup, such as Shandong Taishan and Guangzhou teams in the top two in the Guangzhou division, and Beijing Guoan, the third in the Suzhou division. Although foreign aid is not neat, there is even no such absolutes as Paulinho and Augusto. Core foreign aid, but under the intensive schedule, the advantage of the thickness of the lineup can also keep them competitive.

Data map: Qingdao vs. Wuhan in the Chinese Super League.

Chongqing Liangjiang Athletic, Qingdao Team, Tianjin Jinmen Tigers, and Dalian people who did not perform well in the first stage are all faced with long-term foreign aid irregularities, and even the entire Chinese class once challenged.

The Qingdao team even lost 9 consecutive losses, setting a record for the longest losing streak in the Super League.

I also hope that the national football team at that time can live up to the Chinese Super League, which gave way sharply.