Athletes: Serbia's camp is too short... 6 days is not enough to prepare players

Athletes wondered about the feasibility of holding a short camp for the first national football team in Serbia for only six days (which includes the two days of travel and return), noting that the camp period is very short, and does not add much to the players, considering that it would have been better for the camp to be for a longer period, to achieve a 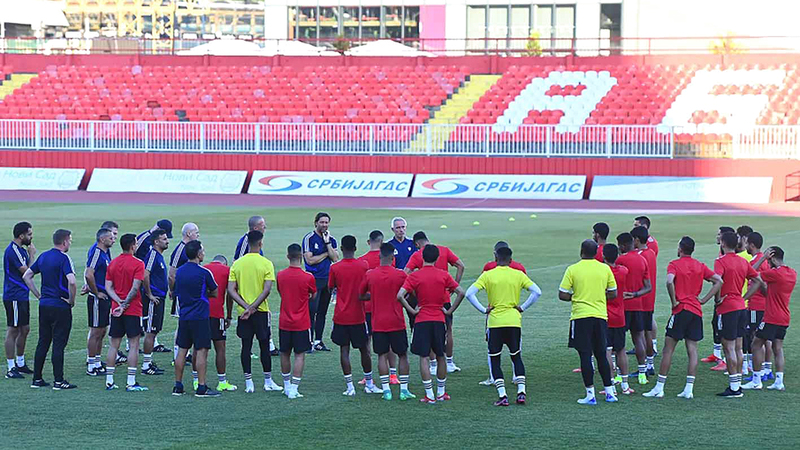 Athletes: Serbia's camp is too short... 6 days is not enough to prepare players

Athletes wondered about the feasibility of holding a short camp for the first national football team in Serbia for only six days (which includes the two days of travel and return), noting that the camp period is very short, and does not add much to the players, considering that it would have been better for the camp to be for a longer period, In order to achieve his desired technical goals, the team is on the verge of an important entitlement in the final round of qualifying for the 2022 World Cup.

Al-Abyad had inaugurated the Serbia camp on the seventh of this month, and trained on the same day, before he finished the camp, the day before yesterday, and returned to the country at dawn yesterday.

The athletes stressed the importance of everyone's support for the national team, and its support for it, whether it is clubs, the media or the sports street.

They told Al-Emarat Al-Youm: "The priority should be in order to provide the team with an adequate opportunity, especially as it is on the verge of two important matches at the beginning of its journey in the final qualifying round for the World Cup, and the sports street was surprised by this short camp, although the opportunity was available. to be for a longer period of time.”

The squad that had left for Serbia camp included 24 players. During the camp, the team performed a number of training sessions, and did not play friendly matches.

The team plays in the final round of the World Cup qualifiers, Group A, along with the teams of South Korea, Iran, Iraq, Syria and Lebanon.

Dr. Salim Al Shamsi, a former member of the Board of Directors of the Football Association, wondered about the meaning of holding a camp so short that the team did not play any friendly match. He said: “We hoped that the preparation period for the national team would be longer, and that the priority would be for it and not for the clubs, and if we exclude the duration of the trip to Serbia and return to the country, the camp period is very short, and not sufficient to achieve the desired goal, even if this camp is in a country A close neighborhood would have been acceptable, but to be in a distant country and for a short period, there are many questions in this regard, which must be answered by the National Teams Committee in the Football Association, especially as the team is on the verge of a very important merit, in the World Cup qualifiers. He added, "The duration of the camp is very short, and we do not know whether it paid off or not, but in all cases we must all support the team and stand with it, and support it strongly during its upcoming journey." Salim Al Shamsi noted:“There may be pressure from the clubs, which caused the camp to be short, as they need their players to be with them before the start of the ADNOC Professional League competitions, which will start on the 19th of this month.”

For his part, a member of the Board of Directors of the former Football Association, technical analyst in the Dubai Sports Channel, Muhammad Matar Ghorab, said that the duration of the team’s camp in Serbia is very short, and does not add anything to the players, especially since the two matches of the team against Lebanon and Syria are linked to the players’ readiness, stressing that it was The entire program of preparing Al-Mentab should be based on coach Marvik's technical needs for the two matches. As for the rest of the team's matches in these qualifiers, they fall within the season, and therefore the readiness of the team's players will be during the season. He added, "Is the change of the preparation schedule for the national team based on the coach's conviction, or under pressure from the Football Association, so all of these matters have more than one opinion?"For his part, the former Chairman of the Board of Directors of Ittihad Kalba Club, Issa Al-Dabahi, confirmed that the Serbia camp period is very short, and insufficient to prepare the team in the first preparation stage, while it should have been longer, stressing that the team is more important than the clubs, and it must be The priority is to prepare him and not for the clubs, noting that the team, despite the circumstances of injuries among a number of its players, is currently going through a somewhat good period during the era of Dutch coach Marvik, and everyone must support him, as he will face very strong teams in the World Cup qualifiers.

Marvik: The Football Association provided the team with all the requirements for the success of the camp

The coach of the Dutch national team, Van Marwijk, praised the great efforts made by the Football Association and the Committee for National Teams and Technical Affairs, in providing all the requirements for the success of the preparatory camp for the Whites in Serbia, stressing that the camp achieved its goals, thanks to the distinctive equipment that enabled the technical staff to complete its mission to the fullest. Face.

He said in statements to the official website of the Football Association: “We had all the necessary supplies during the camp, distinguished training grounds and close to the residence, a comfortable hotel with all services, and the Federation put at our disposal a private plane, to solve the biggest dilemma, which is the fatigue of long travel to Europe, on top of that the weather was great, which made our job easier and enabled us to continue working the way we want to play.”

He added, "If there is a negative aspect in the camp, it was the absence of a number of players, due to injury, and the completion of their treatment program with their clubs, but the good thing is that those who were chosen instead of the absentees, presented distinguished levels and left a good impression."