The two Godolphin stars “Al-Suhail” and “Dubai”, under the supervision of coach Charlie Appleby, are requesting the title of “Hungerford Stakes”, which is being held today at the British “Newbury” track, which is dedicated to the second category horses “Group 2” for a distance of 1,400 meters grass. William Buick, for the first time, to take on a challenge 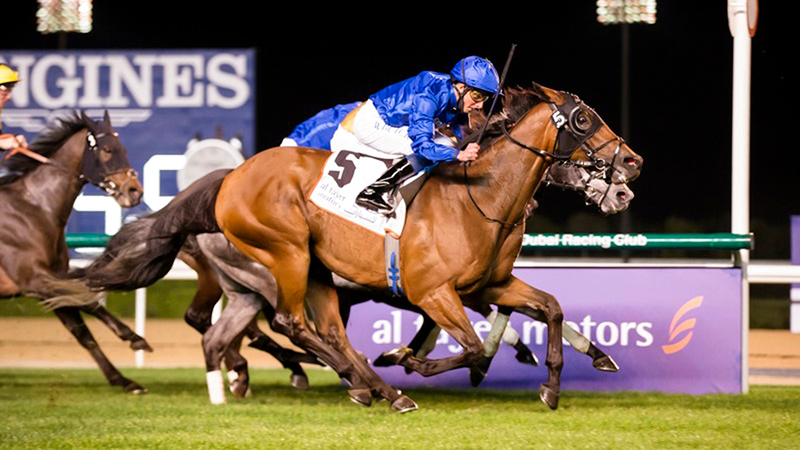 The horse "Dubai" with the "Godolphin" logo returns to racing since its victory last February with the title of "Zabeel Mile" at the Meydan Racecourse.

Godolphin stars "Al-Suhail" and "Dubai", under the supervision of coach Charlie Appleby, claim the title of "Hungerford Stakes", which is being held today at the British "Newbury" track, which is dedicated to the second category horses "Group 2" for a distance of 1,400 meters grass.

Al-Suhail, led by jockey William Buick, is heading for the first time to run the shortest distance challenge since his participation on this distance in the summer of 2019, when he came third on the “Sandon” track, especially since the four-year-old pony achieved remarkable results at the longer distances, Including his victory last season, by six longest in the race "Sir Henry Cecil Stakes", which was held on the Newmarket track for a distance of 1600 meters grass.

The horse "Dubai", led by jockey "Pat Dobbs", is participating in his first race, since he snatched first place last February with the title of "Zabeel Mile" race, which took place on the "Meydan" track in Dubai, and was designated for the second category horses "Group 2" for a mile distance. "1600 metres".

Godolphin's representatives in the British race will face nine elite middle-distance horses, including a trio with the "Shadwell" logo, led by "Dunia" under the supervision of coach Owen Euros, coming from last July's victory at the Ascot track in a race held over the same distance. In addition to "Imagine" under the supervision of coach Richard Hannon, who won at the beginning of last month a victory over the same distance, but rather on the "Newmarket" track.

And enters the circle of competition for the title, "Dream Looper" with the "J Phil" logo, and the supervision of coach "Ed Walker", coming from a broad victory late last month at the "Ascot" track, in a race for the third category horses "Group 3", which came by four Two and a half lengths longer than its closest competitor.

Godolphin coach Charlie Appleby commented on the chances of "Al-Suhail" and "Dubai" in the Hungerford Stakes, saying, in press statements, that "the two horses affiliated with the stallion "Dabawi" are fully prepared to participate in the race, as Al-Suhail is participating in his first participation. Since the Summer Mile, when he showed signs of fatigue in the closing stages of the competition, we feel that his shorter distance challenge will not be a factor in the horse.”

He added: "The Dubai horse carries the highest weight, as a penalty for winning in Dubai this year, but it does not seem strange to this group, and the participation is the first for him since last February, and we hope that this participation will improve his readiness for promising posts in the fall."

"Philomene" and "Highland Avenue" in the French mission

Philomene and her stablemate Highland Avenue bear the Godolphin logo and coach Charlie Appleby in their mission to win the "Pri Guillaume Drano" sprint title for three-year-old Group 2 horses, which is held at the French "Deauville" track, for a distance of 1000 metres.

"Philomene" returns to the French races, after it arrived last June, as runner-up in the "Prix de Diane" classic race dedicated to the first class "Group 1" horses, the world's highest ranked, when it finished 0.75 lengths behind the French horse "John of Arc", winner of the French Grand Prix. The race, which took place at a distance of 1100 metres.

In turn, "Highland Avenue" is based on its fortunes on its strong start in the British season, which led to three consecutive victories, the last of which came last April, in the "Felden Stakes" race at the "Newmarket" track.